Henry Clark runs the rule over the 14 Test hat-tricks taken by England players.

Test cricket hat-tricks are elusive and the mark of an incredible feat of bowling that even some of the best bowlers of all time have failed to achieve. However, it’s not something bowlers set out to achieve, or are generally ranked by; it’s far more likely for wicket tallies or five-for counts to come into the discussion.

In total, there have been 45 Test hat-tricks, 14 of which have been taken by England bowlers. Let’s look back through the lot of them.

Willie ‘Billy’ Bates has the honour of claiming the first of the 14 Test hat-tricks claimed by an England player back in 1883 at the MCG.

The right-arm off-spinner recorded the feat in the first series since England’s defeat by Australia at The Oval in which the infamous ‘RIP notice’ to English cricket was published.

Bates ripped through the Aussie middle-order of Percy McDonnell, George Giffen and George Bonnor in consecutive balls and went onto claim 14 wickets in the match, seven in each innings.

After winning that Test and ultimately the series it is said that England captain Ivo Bligh was presented with an urn that contained the ashes of a burnt bail and from there the Ashes were born.

Despite standing at 5″5, left-arm off-spinner Johnny Briggs was no stranger to a record. He is Lancashire’s second-highest wicket-taker in the county’s history and was the first bowler to 100 wickets in Test cricket.

His ability to expertly change the flight and speed at which he bowled accounted for the wickets of Walter Giffen, wicketkeeper Jack Blackham and Sydney Callaway in Australia’s second innings at the SCG.

Also a talented rugby league player who represented Widnes, Briggs’ heroics weren’t enough to prevent defeat for England in the Test although he did finish as leading wicket-taker in the series with 17 scalps.

As a member of the ICC Hall of Fame, George Lohmann is regarded as one of England’s greatest-ever bowlers.

In fact, the medium-pacer, who had a knack of getting the ball to grip and spit on the unkept pitches of his time, still holds the lowest Test bowling average for bowlers who have taken more than 15 wickets.

Lohmann single-handedly led England to victory in the first Test against South Africa at Port Elizabeth by recording second innings figures of 9.4 overs, five maidens, eight wickets for seven runs which included his hat-trick to wrap up victory.

Sadly Lohmann’s career was cut short after he contracted tuberculosis and died at the age of just 36.

John ‘Jack’ Thomas Hearne is said to be one of the first swing bowlers of his time and his high action that generated plenty of bounce made him one of the most feared bowlers around.

He marked the first-ever Test match played at Edgbaston by removing the Aussie top-order of Clem Hill, Syd Gregory and Monty Noble in consecutive balls with his medium pace.

England had to wait over 30 years for their next Test hat-trick which was produced by the towering debutant Maurice Allom.

The 6″6 seamer is just the third man to take a hat-trick on Test debut and, at the time, was the first bowler to take four wickets in five balls.

His match figures of 8-55 against New Zealand in the first Test at Christchurch included the wickets of New Zealand’s captain Tom Lowry, Ken James and Ted Badcock in consecutive deliveries.

The right-arm off-spinner only played eight Tests for England as he played second fiddle to Hedley Verity, England’s preferred spinner of the era.

In the first Test of England’s tour of South Africa, Goddard removed Dudley Nourse, Norman Gordon and Billy Wade in quick succession although it wasn’t enough to prevent the match eventually ending in a draw.

In search of 3,000 career first-class wickets, Goddard continued to play for Gloucestershire until he was 51 and despite a 10-wicket-haul in his final season, finished short on 2,979 wickets.

As a tall and thin fast bowler known for producing a venomous bouncer, Peter Loader looked set to have a long and successful international career.

Injuries and competition for places in the seam bowling department meant the former Surrey bowler only managed 13 Tests for England. The undoubted highlight came when the West Indies toured England in 1957.

Opening the bowling with the legendary Fred Trueman, Loader stole the show in the first innings by taking career-best figures of 6-36 including his hat-trick of scalps. It was to be the last hat-trick by an England bowler for 38 years.

After a strong start to his England career led him to being dubbed ‘the new Botham’, Dominic Cork continued his fine form by taking a hat-trick in just his third Test match.

He claimed the wickets of Richie Richardson, Junior Murray and Carl Hooper at Old Trafford to help England to a convincing six-wicket win in the fourth Test of the series.

West Indies were an opponent Cork thrived against throughout his career. He recorded his best Test bowling figures of 7-43 on debut against them and was later named a Wisden Cricketer of the Year in 1996.

Known for his fine ability to reverse swing the ball, Darren Gough joined an elite club of England bowlers with his performance against Australia in Sydney.

After getting Ian Healy caught behind Gough produced his trademark swinging yorkers to get rid of Stuart MacGill and Colin Miller in consecutive balls.

Only MacGill and Glenn McGrath took more wickets than the stocky seamer in that series. He also led England to a Boxing Day Test victory in Melbourne by taking 5-96 in the first innings.

Matthew Hoggard‘s bowling was instrumental in England securing their first Test series win in the West Indies since the 1967-68 series.

‘Hoggy’, who had already claimed the wicket of opener Daren Ganga, produced a perfect spell of swing bowling to dismiss Ramnaresh Sarwan, Shivnarine Chanderpaul and Ryan Hinds in the third Test in Bridgetown.

After falling narrowly short of achieving the feat in the first innings after recording two wickets in two balls, Ryan Sidebottom might have felt like his chance of a Test hat-trick had gone.

But in the second innings the left-armer put those worries to bed by removing Stephen Fleming, Mathew Sinclair and Jacob Oram. However, England eventually lost the game by 189 runs.

By taking the wickets of Daniel Vettori and Kyle Mills later in the innings Sidebottom claimed his first 10-wicket-haul in Test cricket and completed a fine personal performance in Hamilton.

On his home ground Trent Bridge, Stuart Broad‘s legs were well and truly pumping against India in 2011. 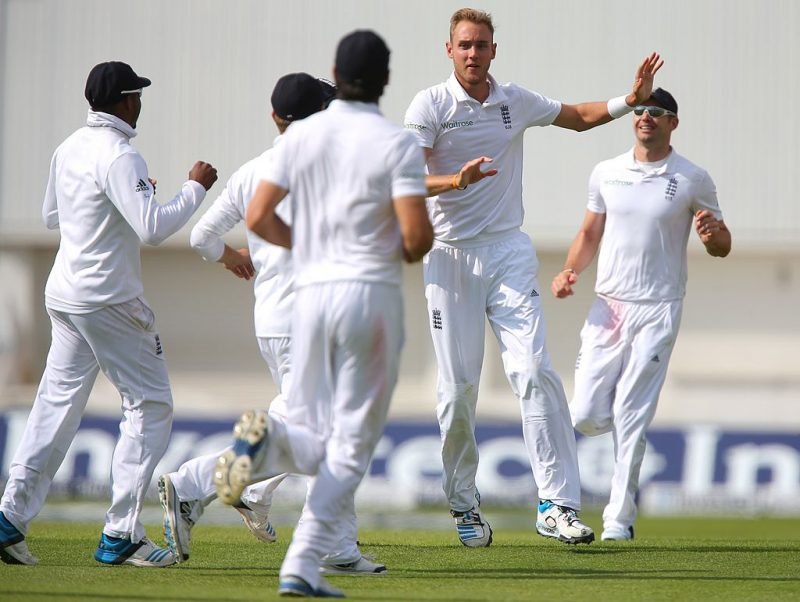 First he got MS Dhoni to snick off to a full-length ball outside off-stump before trapping Harbhajan Singh in front with a perfect full-length delivery, though replays suggested he was lucky there was no DRS in the series.

He completed the rout by dismantling the stumps of Praveen Kumar. Having been struggling, England were suddenly in a dominant position and went on to win the Test.

In the second Test against Sri Lanka at Headingley, Broad became the first England bowler and just the fourth in Test cricket to claim two hat-tricks.

Broad completed his efforts by snicking Shaminda Eranga off to wicketkeeper Matt Prior at the start of the next over but had to be reminded by umpire Billy Bowden that he had even achieved the feat. I guess some people just get used to success.

After Ben Stokes had scored a brilliant first innings ton at The Oval, Moeen Ali stepped up to wrap up victory with the ball in style.

It was the first hat-trick for an England spinner since 1938–39 and the first in a Test at The Oval. After getting both Dean Elgar and Kagiso Rabada caught at first slip, Moeen then trapped Morne Morkel in front. Umpire Joel Wilson was unmoved however; it took a review to show the delivery would have crashed into leg stump.

Moeen wrote himself into the history books as just the third player to seal a Test victory with a hat-trick. It was also the first hat-trick where all three batsmen dismissed were left-handers.