On his debut in 1994, the effervescent Yorkshire fast bowler Darren Gough made a huge impact on the England team. He was a Wisden Cricketer of the Year in 1999, prompting Matthew Engel to pay tribute to a cricketer England desperately needed.

There are two different England teams these days. This is nothing to do with the increasingly disparate Test and one-day sides, because the difference affects them both. One lot is the downbeat, fatalistic crew who have become all too familiar: heads bowed, expecting the worst. The other is seen when Darren Gough is fit and firing.

At Old Trafford against New Zealand in 1994, Gough made one of the most sensational Test debuts of modern times. He took a wicket in his first over and had figures of 4-47. Earlier, he had gone out and hit a rousing 65, with 10 fours. He was 23 years old. Everyone yelled “New Botham”, which was not a Yorkshire mining village but already a cliché, and later a rather sad joke.

That winter, with England having been humiliated in the Melbourne Test, they went to Sydney looking hopeless. One young man took the game by the scruff. England 309 (Gough 51, and a thrilling 51 at that). Australia 116 all out (Gough 6-49). The Test was not quite won, but its hero was suddenly the hottest property in English sport. He was young, good-looking, an authentic Yorkshireman with that air of sleeves-up defiance which the nation adores. Vast wealth as well as glory looked a certainty. 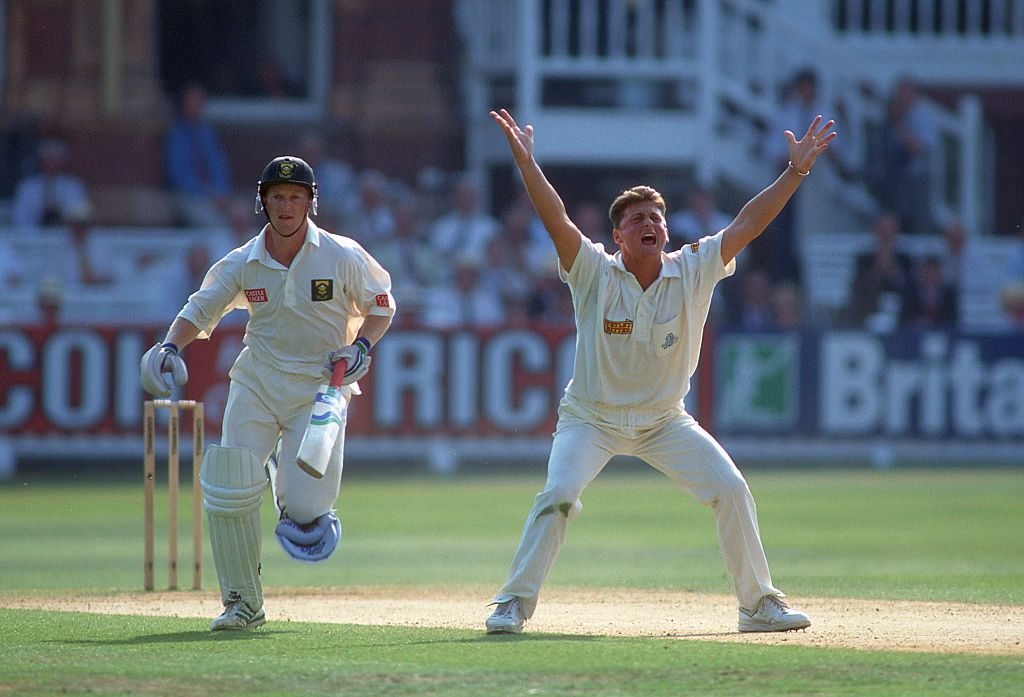 When Gough came back into the South Africa series, so did England

But Gough had felt pain in his left foot even while the cheers were echoing. He ignored it. In a one-day international a few days later, he broke down and went home with his foot in plaster. It took four years to recapture that exuberance, in which time his career veered between wretched injuries and fated comebacks. His batting form went to pieces. And at the start of England’s next Ashes tour, he became the sort of bowler everyone drops catches off, which was never Botham’s fate. He was a star who twinkled rather than blazed.

And yet the omens of 1994 have been proved right. And in 1998 he delivered. At Headingley, with his home crowd roaring him on, he ripped through South Africa’s second innings to settle the series: 6-42 – three of them in a dramatic opening burst. Then he was at the heart of England’s epic win in Melbourne before starting 1999 with a hat-trick in the Sydney Test. In any case, Gough’s contribution to the team cannot merely be computed. He is an inspirational cricketer in an uninspiring era. And his successes make the Tests he has missed even more poignant.

Darren Gough was born at Barnsley on September 18, 1970. No town in cricket has such a rich tradition of character and characters: Geoffrey Boycott, Dickie Bird, Michael Parkinson. Gough was not born straight into the tradition. His father, a pest control officer, was a sports fan rather than a performer. But young Darren quickly established himself as a breathtakingly good sportsman and, at school, was captain of football, rugby and athletics as well as cricket. 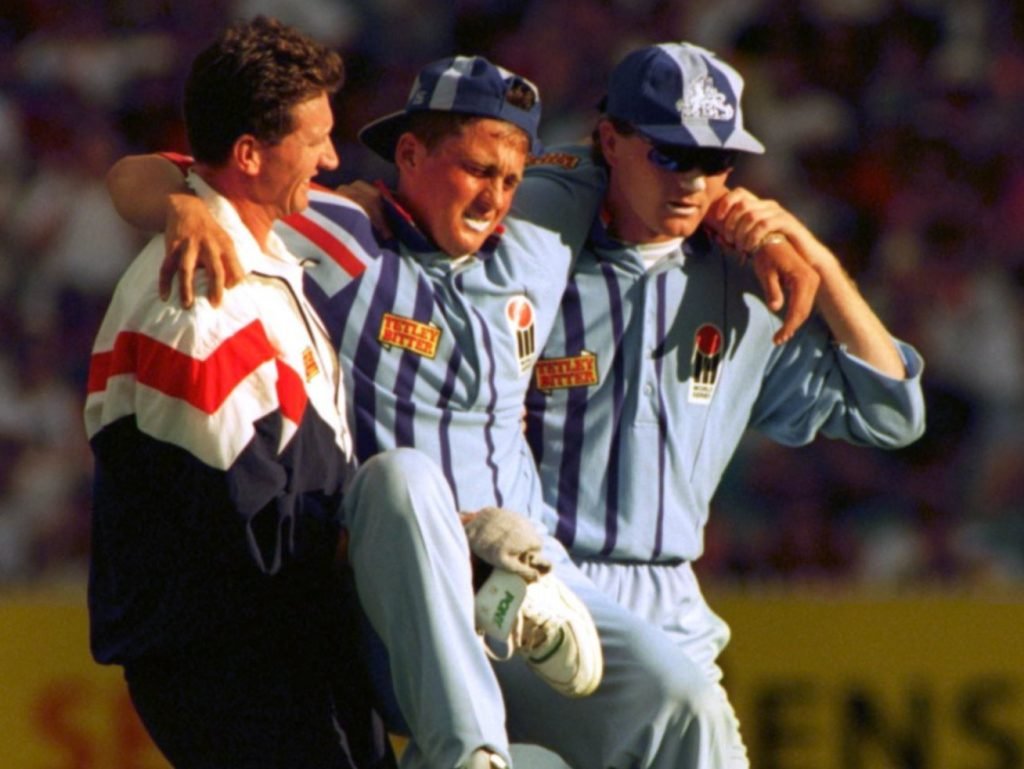 His successes make the Tests Gough missed even more poignant

Football came first, and was the centre of Gough’s early ambitions as he went through the Barnsley FC youth system and then became a Government-funded trainee at Rotherham United. He was a midfielder – “stylish” he insists – modelling himself on Glenn Hoddle, and dreaming of a transfer to Tottenham. It never happened. “It was a time when football was all about quick runners, and I wasn’t good enough.”

"Gough’s contribution to the team cannot merely be computed. He is an inspirational cricketer in an uninspiring era."

But then came another traineeship: this time with Yorkshire. And the club thought enough of him to give him a go in the first team right at the start of the 1989 season. The side travelled from Leeds to Lord’s by train. Darren’s dad took him to the station; David Bairstow, the captain, gave the lad, just 18, a big bearhug and promised Dad he would look after him. Pressure can override promises. Gough had to bowl 13 consecutive overs in the second innings. He ended up injured, and played only once more all season.

As seems to be Gough’s fate, fulfilment came slower than expected. He remained a member of the first-team squad, considered too valuable to be wasted much in the Second Eleven, but he was not getting enough chances to be kept happy. At the start of 1993, he thought he would give it one more season before thinking about another county. Then the opportunities came, and he grabbed them: 57 first-class wickets that season, followed by an A tour to South Africa, and his Test debut. But the glory was transient. He played again in 1995 when not quite ready. For a while, he ceased to be a certain choice, and was ignored (mysteriously) through the summer of 1996. In 1997, he began to feel pains in his left leg and was forced to pull out of the West Indies tour. When he reappeared, at Edgbaston, he broke a finger. 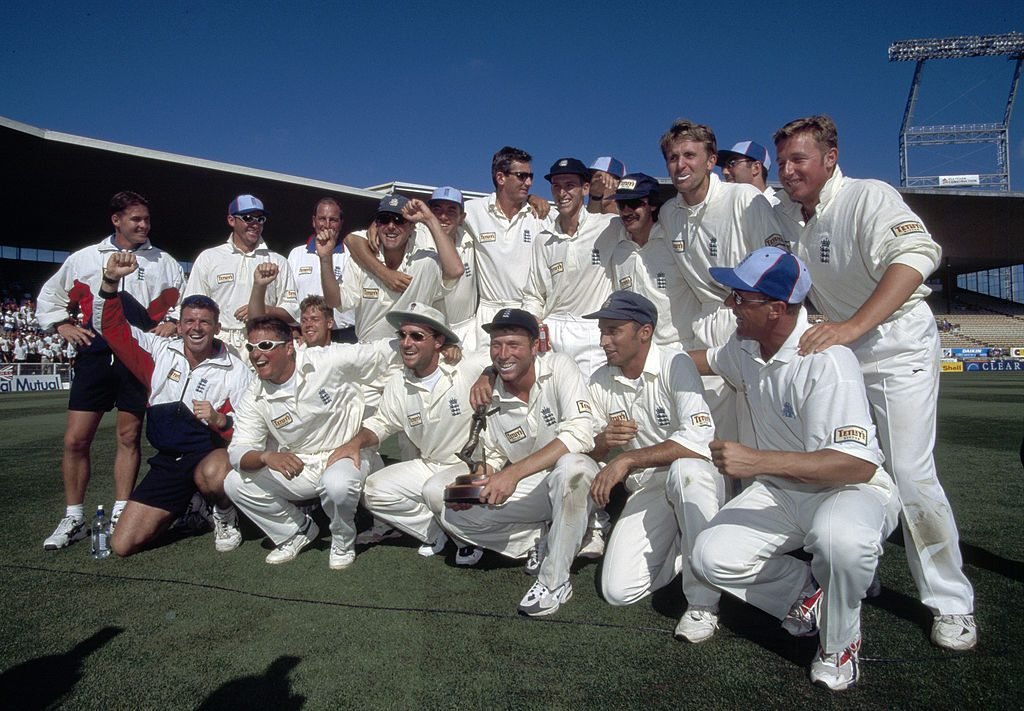 In an England team of brooders and worriers, Gough stood out for his enthusiasm

But the selectors knew now how much they wanted him: David Graveney, the chairman, called him the pulse of the team. And when Gough came back into the South Africa series, so did England. His bowling was highly skilled by now.

Though he could not match Allan Donald on the speedometer, he was consistently quicker than anyone else, and was able to offer just about every other weapon in the fast bowling armoury as well – with the possible exception of really telling bounce. Pace bowlers like Gough who are not six-footers tend to produce deliveries that skid rather than leap.

Above all, though, in a team of brooders and worriers, he stood out for his bullish enthusiasm. England need Darren Gough, and not just for his wickets.