Several England all-rounders struggled with the pressure of being dubbed “the new Botham”. But in his first summer as a Test player, Dominic Cork seemed to thrive on it. He was named a Wisden Cricketer of the Year in 1996.

Very rarely in recent times has an English cricketer burst on to the Test scene in a manner that suggested that it was always his destiny to succeed at the highest level. David Gower announced himself with a languid pull for four off the first delivery he received. Ian Botham took five wickets the first time he bowled and it was obvious to everyone that there was much more to come.

But the arrival of Dominic Cork last summer was, without question, the most explosive entrance in living memory. His seven for 43 in the second innings of the Lord’s Test against West Indies are the best figures ever achieved by an Englishman on his debut. Two matches later Cork seized the first hat-trick taken by an England bowler in a Test match since Peter Loader in 1957.

In June, while England were losing the first Test at Headingley, Cork was still simply a young and promising county cricketer with eight one-day internationals behind him, hoping that consistent performances for Derbyshire would catch the eye of the Test selectors. Less than two months later, he was handing over the cheque for £21 million to the winner of the National Lottery.

Dominic Gerald Cork was born on August 7, 1971 in Newcastle-under-Lyme, the third son of Gerald Cork, a pace bowler of some repute in the North Staffordshire and South Cheshire League. His mother, Mary, rated dad a shade faster than Dominic – and she should know, because cricket in the Cork household meant a family day out. While the three boys were all involved in the Under-14s, Dad umpired and mum made the teas. On occasions, all three Cork boys played under Gerald’s captaincy in the Betley Cricket Club Second Eleven.

Perhaps it is because he is the youngest of three brothers that Dominic Cork has been moulded into the intensely competitive individual that he is today. Another reason could very well be that his childhood hero was Ian Botham, who played his own natural, aggressive game even if England were losing. It did not always work, but at least he never gave up. 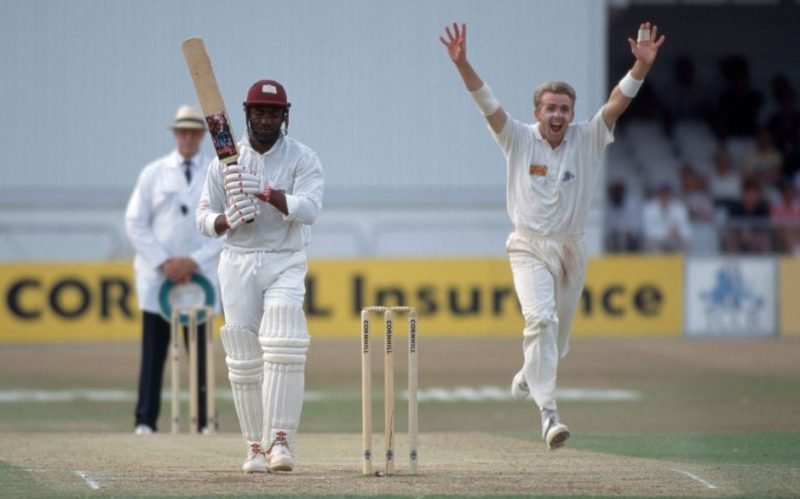 The “Botham Influence” was a major factor in Cork’s development. Cork’s smooth, short run-up might have a suggestion of Sir Richard Hadlee about it, but it was modelled on the early Botham. And what about that appeal? That raucous screech with back arched and both arms flung skywards, delivered with such ferocity that the umpire might fear being blown into the sightscreen? Again, Botham has been copied to some degree. But there is also a contribution from Hadlee (the bending of the knees bit) and, to make the whole performance particularly terrifying, a pinch of Ole Mortensen has been thrown in, although Cork has wisely decided not to attempt the accompanying Danish expletives.

Cork could easily have played for England before he finally broke through last summer. He toured with England A four times after making his Championship debut in 1990 against Leicestershire at Derby (my own final match). It would be nice to think that the national selectors had embarked on a deliberate policy and had decided that Cork, however promising, should not be rushed into the England team until he was absolutely ready. It is more likely they felt, unfairly, that Cork had prospered on helpful, green pitches at Derby and Chesterfield and that he would have to prove himself on surfaces which required greater patience and skill before being trusted in Tests.

When Alec Stewart safely pouched an edge from the last man, Courtney Walsh, Cork was a national hero

Cork might not have made his dramatic entrance at Lord’s had he not taken nine for 43 against Northamptonshire a week before the selection meeting. (Should anybody think that Cork enjoyed more than his fair share of fortune during 1995, it should be remembered that he claimed the first nine wickets in that match and watched, aghast, as the tenth was dropped off his bowling.) His first Test return for England was hardly devastating – Ian Bishop was his only victim – but in the second innings, as West Indies chased 296. Cork, roaring in from the Nursery End, bowled England to a 72-run victory. When Alec Stewart safely pouched an edge from the last man, Courtney Walsh, Cork was a national hero.

West Indies had regained the lead by the time the series moved north to Old Trafford and, at the start of the fourth day, were 159 for three. By the end of the first over they were 161 for six. Richie Richardson played the fourth ball on to his stumps, Junior Murray fell palpably leg before wicket to bring in Carl Hooper whom Cork had dismissed as the final wicket in his hat-trick for Derbyshire against Kent the previous summer.

“It’s amazing how many hat-trick balls are not bowled in the right place,” Cork said. “For Hooper I knew that I had to pitch it right up, almost half-volley length, and get it straight because he is an lbw candidate early on.” The plan worked. Hooper was struck plumb in front, Cork vented an ear-splitting appeal and, after a moment’s delay, umpire Mitchley raised his right index finger. “I just knew he was going to give it out,” Cork said. “I have watched the replay a thousand times to check if there was any way that it couldn’t have been given, but there definitely wasn’t.”

Half a dozen young all-rounders have been given a chance to succeed the irreplaceable Ian Botham, but none has managed to make that position in the England team his own. Dominic Cork, with his tireless out-swingers and in-duckers, coupled with a natural eye for a cricket ball, is the latest to try on his hero’s crown.

Related Story: From Krejza to Ashwin: The best Test spinner debuts in the 21st century

His batting caught public attention when he pulverised the Lancashire bowling in the 1993 Benson and Hedges final. At Test level it has more potential than achievement, but he know what needs to be done. “I am determined not to be one of those England cricketers who has had a good start and then not gone on,” he says through gritted teeth. And, looking on as he goes about his daily business of training and practising, one is left in no doubt whatever that Cork means every word.