George Lohmann was one of the greatest bowlers in the history of the game. His tragically early death in 1901 brought this Wisden tribute.

To those who saw him during the tour of the South African cricketers in the past summer – he was assistant manager to the team – the news of George Lohmann’s death did not come as a great surprise. He was obviously broken in health, and the mere shadow of his old self. The fact of his dying of consumption affords strong evidence that his recovery from the illness which attacked him after the season of 1892 was only partial.

Still, for the time he seemed fairly robust, and it will be remembered that when he came back from Matjesfontein in 1895, and again in 1896, he bowled with much of his old skill. Indeed, in 1896 he played for England at Lord’s, and helped Richardson to get the Australians out for 53. Towards the end of the same season an unhappy quarrel with the Surrey club brought his career in first-class cricket to a close, but into that matter there is no need to enter.

Born in June 1865, he was only in his 37th year. He first played for Surrey in 1884, and did enough to convince good judges – W.G. Grace among the number – that an all-round cricketer of no ordinary promise had come forward. In 1885 he jumped at once to the top of the tree as a bowler, and at the top he remained without ever looking back, till his health first gave way. The great part of his career covered eight seasons in this country – 1885 to 1892 inclusive – and during that time he paid three visits to Australia, going out in 1886/87 and 1887/88 with Shaw and Shrewsbury’s teams, and in 1891/92 with the side got up by Lord Sheffield. 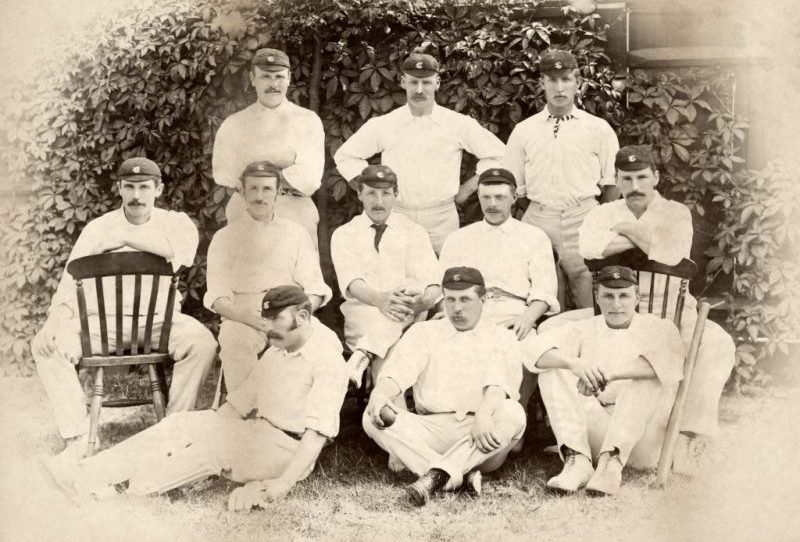 The Surrey county cricket team, circa June 1887. Lohmann is on the right of the front row

That he crowded too much work into a few years there can scarcely be a doubt. No one played cricket more strenuously or threw himself more completely, heart and soul, into the game. It is the opinion of Alfred Shaw that he would have lasted longer if his energies had been more confined to his bowling. For a bowler who nearly always had to go on first, whatever side he played for, he got too many runs, and, as everyone knows, he was one of the most brilliant and untiring of fieldsmen. If he had not been able to bowl at all, his batting and fielding would have entitled him to a place in any eleven.

He made the position of cover-slip more important than it had ever been before his day, constantly bringing off catches that ordinary men would not even have tried for. In this part of the game he, perhaps, reached his highest point in the England and Australia match at the Oval in 1888. The catch with which he got rid of Alec Bannerman in the first innings of Australia approached the miraculous. It was said at the time that Bannerman talked of nothing else for the rest of the day.

"As a match winner we have in this generation had no one greater except W.G. Grace, and, possibly, A.G. Steel"

Still, it is upon his bowling that his fame will mainly rest. He was of the school of Spofforth, commanding great variety of pace, and being master of endless devices for getting batsmen out, but he in no way imitated the great Australian’s delivery, nor was he able to bowl so fast a ball. All the same, he would hardly have been the bowler he was if Spofforth before him had not shown that the arts of the old slow and fast bowlers could be combined in one person.

On a wicket that afforded him the least help he could get as much off-break as he wanted, and though he wisely did not use the leg-break to any great extent he had it in reserve. To put the matter in a few words, he was a completely equipped bowler, ready to make the most of any advantage that the ground or the weather might give him. On a perfectly true fast wicket he was not so difficult as Richardson or Lockwood, but even under conditions entirely favourable to batsmen he did many wonderful things. Take him for all in all, he was one of the most striking figures the cricket field has known. As a match winner we have in this generation had no one greater except W.G. Grace, and, possibly, A.G. Steel. To him more than to anyone else was due the restoration of Surrey to its old place at the head of the counties.

He made his own style of bowling, and a beautiful style it was – so beautiful that none but a decent cricketer could fully appreciate it. He had a high right-over action, which was naturally easy and free-swinging, but, in his seeking after variations of pace, he introduced into it just a suspicion – a mere suspicion – of laboriousness. Most people, I believe, considered his action to have been perfect. To the eye it was rhythmical and polished but it cost him, probably, more effort than it appeared to do.

His normal pace was medium; he took a run of moderate length, poised himself with a slight uplifting of his high square shoulders, and delivered the ball just before his hand reached the top of its circular swing, and, in the act of delivery, he seemed first to urge forward the upper part of his body in sympathy with his arm, and then allow it to follow through after the ball. Owing to his naturally high delivery, the ball described a pronounced curve, and dropped rather sooner than the batsman expected. This natural peculiarity he developed assiduously into a very deceptive ball which he appeared to bowl the same pace as the rest, but which he really, as it were, held back, causing the unwary and often the wary to play too soon.

He was a perfect master of the whole art of varying his pace without betraying the variation to the batsman. He ran up and delivered the ball, to all appearances, exactly similarly each time; but one found now that the ball was hanging in the air, now that it was on to one surprisingly soon. He had complete control of his length, and very, very rarely – unless intentionally – dropped a ball too short or too far up.

He had a curious power of making one feel a half volley was on its way; but the end was usually a perfect length ball or a yorker. He had that subtle finger power which makes the ball spin, and consequently he could both make the ball break on a biting wicket and make it “nip along quick “ on a true one. He made a practice of using both sides of the wicket on sticky pitches. If he found he was breaking too much, he would change from over to round the wicket, and on fast pitches he soon had a go round the wicket at a batsman who appeared comfortable at the other sort.

But he was full of artifices and subtleties, and he kept on trying them all day, each as persistently as the others, one after another. With all his skill, he would never have achieved his great feats but for his insistence of purpose. He was what I call a very hostile bowler; he made one feel he was one’s deadly enemy, and he used to put many batsmen off their strokes by his masterful and confident manner with the ball. He was by far the most difficult medium-pace bowler I ever played on a good wicket.