“We’re different,” says Sir Ian Botham in the latest issue of Wisden Cricket Monthly – an all-rounders special out on September 17. “We tend to be workaholics when we’re out there playing – we always want to be involved. That’s just our make-up.”

Jo Harman’s exclusive interview with the legendary England all-rounder forms the centrepiece of our new edition, which also includes Richard Heller’s stunning profile of Imran Khan, a chat with the trailblazing Enid Bakewell, as well as features on Ben Stokes, Sir Garfield Sobers, Jacques Kallis and the evergreen Darren Stevens. We also analyse which all-rounders are statistically the greatest to have graced Test cricket.

Continuing the all-rounders theme, Tim Bresnan speaks to John Stern about his glory days with England, departure from Yorkshire and first forays into plumbing, while elsewhere in the magazine we speak to Ian Bishop about his career on each side of the boundary rope and preview England Women’s forthcoming T20I series against West Indies by talking to breakthrough stars Sarah Glenn and Mady Villiers.

There’s a special feature by Phil Walker on the tensions that exist within English coaching, poet and comedian Tim Key tackles the greatest series of them all in ‘My Golden Summer’, Suresh Menon considers the legacy of MS Dhoni, and David Lloyd selects a team of Lancashire legends in ’The Greatest XI’.

And, as always, there’s expert opinion from our columnists: Andrew Miller says we should revel in the mastery of James Anderson rather than fixating on what comes next, Elizabeth Ammon gives her appraisal of Colin Graves’ tenure as ECB chairman, and Zafar Ansari argues that English cricket risks alienating Jofra Archer by obsessing about his pace.

“Sorry, how much pressure Ben has to cope with? Were you around in the 70s and 80s?”
An exclusive interview with Sir Ian Botham on the role of the all-rounder and being in the spotlight, on and off the pitch 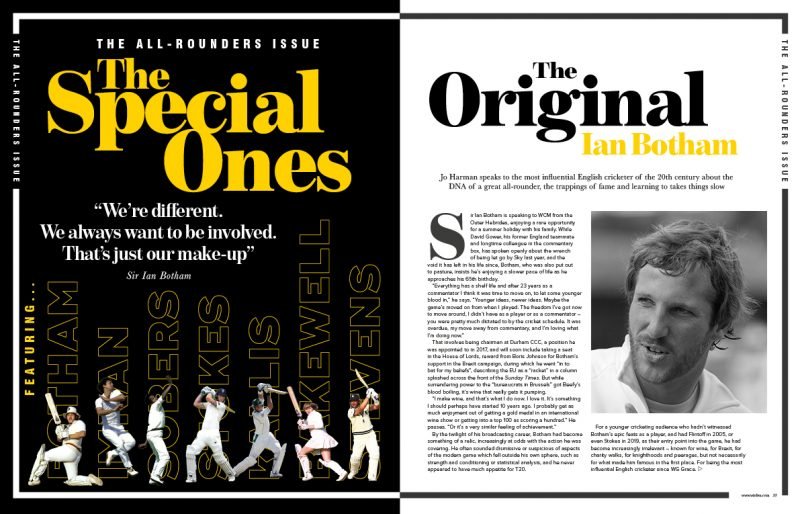 “Here is a perfect piece of evolution: a player retrofitting his career to match his environment. It has its own kind of genius, however much of an accident it was at first.”
Jon Hotten hails the incomparable Darren Stevens

“Bell was patronised by many more people than just Shane Warne in those early years. He had to weather it, close his ears off, and find a way to embrace and not apologise for all that emasculating elegance he could do nothing about.”
Phil Walker says farewell to Ian Bell

“I thought it’d be good to learn a trade. I went for plumbing because, for one, plumbers are expensive. For two, if you get it wrong the worst that can happen is you get a bit wet. It’s not like you’re messing with electrics and it could actually kill you.”
Tim Bresnan speaks to John Stern about his move to Warwickshire and what the future might hold for him 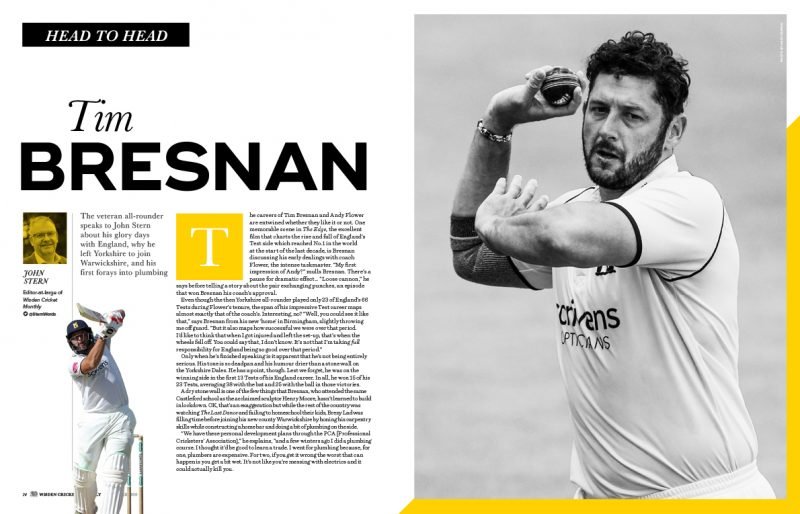 “The great violinist, Yehudi Menuhin, had a recording contract with EMI that spanned 70 years. Why, when he feels he’s still capable of expanding his own horizons, and doing justice to his genius, would Anderson begin to contemplate a life without a cricket ball, his instrument of choice, in his hand?”
Let us revel in the mastery of an all-time great rather than fixating on what comes next, writes Andrew Miller

“If the aim is to inspire the hearts and minds of those watching, then the audience wants to see a reflection of themselves on the pitch. Someone they can point to and say: ‘They made it, why can’t I?’ If everyone they’re watching comes from the same few places and has an identikit story, then the dream remains just that, too distant to grasp.”
In the next part of our series on cricket’s diversity problem, James Wallace examines the ‘class ceiling’ which runs through the game 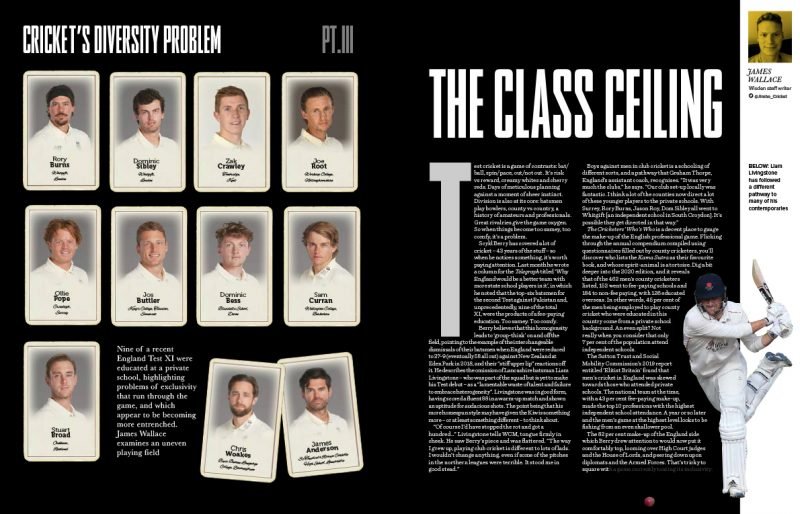 “The constant chatter about Archer’s pace has frequently and unfairly slipped into questions about his commitment. Conversations concerning his pace often feel like a proxy for talk about how hard he is trying. There’s no good reason to conflate the two.”
Zafar Ansari says English cricket runs the risk of marginalising a precious talent

“I remember just standing there, looking deep into Viv’s eyes – hoping that I would be able to see something in his eyes that would stand out to me and tell me why he was such a superhuman cricketer. Of course, I didn’t see anything – because eyes are eyes.”
Ian Bishop, the West Indies fast bowler turned commentator, on his life in the game

“He started as Banksy and finished off as Rembrandt.”
David Lloyd selects James Anderson’s in Lancashire’s ‘Greatest XI’ 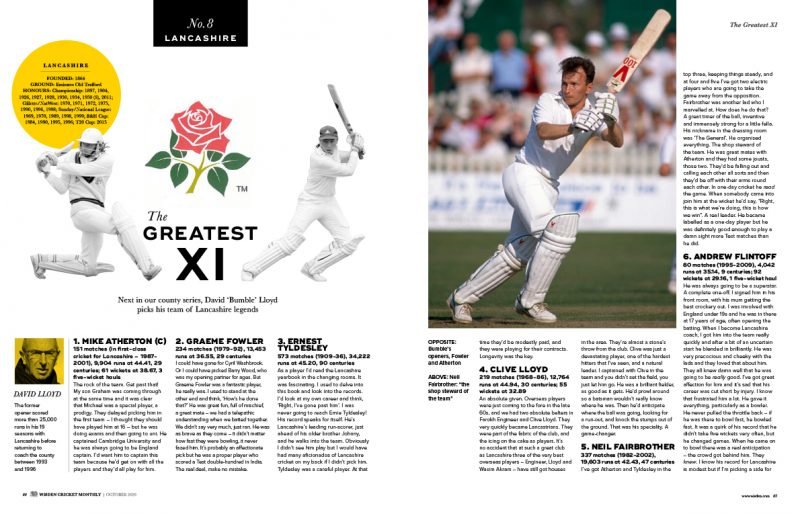 “I’d like to say that my mind was on the show. I’d love to. But you try focusing on a sketch about a magic hat when you know England have just lost Trescothick cheaply and Gillespie’s got his dander up.”
Tim Key looks back on a magical 2005 in ‘My Golden Summer’ 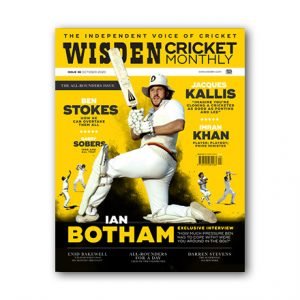