Adam Hollioake, the former Surrey and England skipper, talks through the finer points of getting the most out of the twirlers at your disposal.

You don’t really see international captains making massive mistakes when it comes to utilising their spinners. Sometimes they can bowl them an over or two too many and are too slow to execute certain tactics. In a Twenty20 game, that can be the difference between winning and losing. The biggest thing you can do as a captain is understand how your spinner works – his strengths, weaknesses and habits – and use that all to your advantage. Some bowlers you reassure, some you leave alone and support with your fields.

One thing I did with Ian Salisbury was take away the fear. He did worry about going for runs, he really didn’t like it. He always had one eye on his runs column. When I brought him on I used to say, “Look, I don’t care if you go for runs – I just want wickets”. I tried to ease his mind so he could just concentrate on taking wickets. He’d hate it if he went for a couple of fours early on, so I’d set a defensive field in his first over, to allow him to get loose and get into it.

Figure out the equation

It’s all an equation and you need to involve all your bowlers. Figure out the rate at which your spinner takes wickets and then see how many runs he goes for. If you have other bowlers who go at two an over and your spinner goes at five, factor that in and determine whether you can afford to bowl him. If you can because you have runs to play with or desperately need a wicket, set fields accordingly.

Working with a worldie

Saqlain was one of the best bowlers of all time and he could bowl in any conditions, with any ball. If he was bowling well, which was 95 per cent of the time, there was very little we worked on during the games, apart from a particular field placing we might use. For example, one thing we did notice was that the way Saqlain bowled, traditional silly mid-off was taking a lot of catches to his right. Looking at that, we decided to move him straighter and we started getting more chances like that. 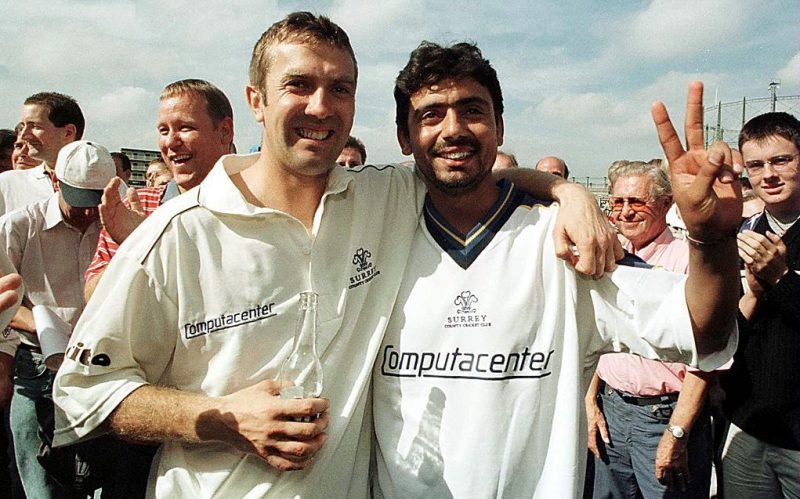 Hollioake led Surrey for six seasons from 1997, winning three Championship titles, with the help of Saqlain Mushtaq and Ian Salisbury. In the first five seasons under Hollioake, the duo took 577 wickets

Salisbury was prone to bowling bad deliveries but he also bowled wicket-taking ones. He always wanted runs on the board and conditions in his favour, but he was probably the best bowler I’d seen at bowling a side out when they had no chance of winning. He could just concentrate on bowling wicket-taking deliveries. He was in the side to take wickets – I’d never bring him on to keep things tight.

There’s nothing wrong with bringing your spinner on early, but what you need to ensure is that you make singles difficult to take – boundaries should be even harder. Obviously with your all-time great bowlers, you can even get a couple of men around the bat. But for other bowlers, sticking to a strict plan is the way to do it. Nathan Lyon did it brilliantly in Australia by just firing the ball in at the leg-stump, keeping a tight line, with fielders predominantly on the leg-side. He ended up picking up wickets through some poor batting, but that made England put pressure on themselves. There’s no point giving Lyon a field you’d give to Muralitharan or Warne – you need to know the limitations of your spinner and help him.