Rob Johnston looks back at Surrey’s magical mystery man Saqlain Mushtaq, who turned out to be one of county cricket’s finest imports ever.

At the turn of the millennium, Surrey were the team to beat in county cricket. They won three Championships between 1999 and 2002 as well as a one-day title and the Twenty20 Cup in 2003. Nobody was more important to that success than Pakistan off-spinner Saqlain Mushtaq.

Saqlain signed for Surrey in 1997 and took 424 first-class wickets for the club at an average of 21, as well as another 120 in limited-overs cricket.

Adam Hollioake skippered Saqlain for those Championship wins. “At first there was the language barrier,” Hollioake says, “but it wasn’t that hard to realise that he needed all the men round the bat and some slips in, regardless of whether we could communicate.

“As time went on and his English got better, and his understanding of English conditions came on, he didn’t really need much captaincy at all. We just had to make sure he looked after his knees to keep him out on the pitch.”

Saqlain is widely regarded as the first bowler to master the doosra, a delivery he developed playing tape-ball cricket in his youth. “When he first came to Surrey and he started bowling it in the nets, nobody had ever seen it before and we had no idea how to pick it,” remembers Hollioake. “At that time, he was the only bloke doing it, certainly in county cricket, so it wasn’t a particularly ingenious plan to get him to bowl it more often. I told him that he should try and bowl it first ball to a new batsman because he should always bowl his best ball first up. He liked that piece of advice and he stuck with it.” 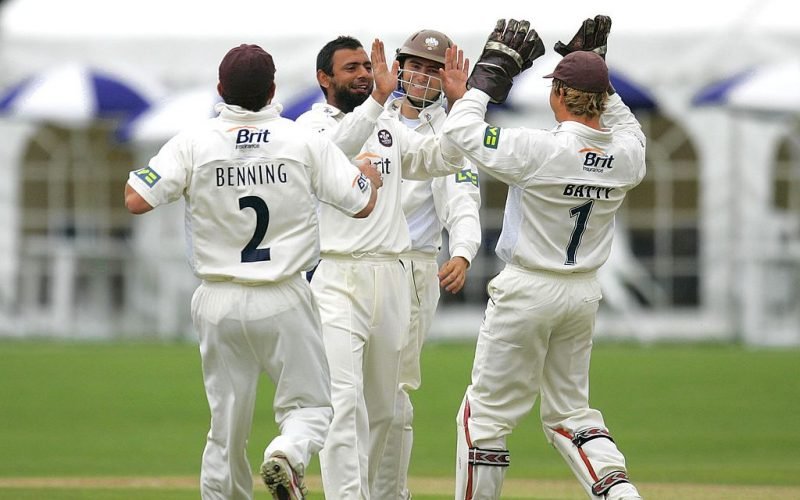 Saqlain’s partnership with England leg-spinner Ian Salisbury was vital in the three Championship-winning seasons, as they shared 326 first-class wickets. They were particularly potent at The Oval where the quicker pitch would create sharper turn.

Saqlain bowled some magical spells in the Championship, including a haul of 7-19 against Sussex at Hove in 1999 which he then bettered the next year with figures of 7-11 against Derbyshire. In 1999 he took 58 first-class wickets at a remarkable average of 11.37, helping Surrey win their first title since 1971.

Saqlain also had a fine Test career, taking 208 wickets, but it was in ODI cricket, where he became the fastest bowler to 100 wickets – in 53 matches, a record that still stands today – that he was most impressive. Hollioake believes he was equally strong across all formats. “He was a wicket-taker but he was also very economical which made him a great one-day bowler. Some attacking spinners can give away plenty of runs but with the ball spinning both ways it made him very difficult to get away in one-day cricket.

“I don’t think that should detract from how good he was in first-class cricket, though. Saqlain had more to do with our Championship victories than any of our one-day wins. He and Martin Bicknell were our two best players in the four-day game at that time. He was hugely important to those victories.”

He’s bowled us over with that one.

Knee injuries severely reduced his effectiveness after the 2003 season and he never quite recaptured his best form, losing his place in the Pakistan side to Danish Kaneria. He still turned out for Surrey, although without the same impact of his early seasons, and in 2007 he signed for Sussex before returning to The Oval for a short stint in 2008.

“He was just fantastic to have around, always so positive and cheerful,” says Hollioake. “He was a brilliant cricketer and a brilliant bloke. A lot of overseas players don’t really get a chance to become part of the fabric of the club because they’re not around for long enough. But Saqlain wasn’t just an overseas player, he was a Surrey player.”