Robert Croft, a legend of the valleys, picked out the landmark moments from an epic 23-year-long career.

This was the breakthrough for me. I’d played a few matches and done okay but here I got 14 wickets. Before that I’d got a couple of five-fers but this was announcing myself as a match-winner. That makes a difference, it’s great to get five-wicket hauls and to score hundreds, but to do it and be the match-winner, it gives you a boost and it sends a message out to your teammates and opponents that this guy is dangerous.

In 1993, we won our first one-day tournament. The Welsh support was incredible, the sort of thing we had only experienced before in rugby! On the way to the ground there was such a queue we had to get out of our car about a mile from the ground. We took a punt and we saw a couple of guys carrying a Welsh flag, threw them our keys and walked. We would have missed the warm up otherwise! Thankfully they were good to their word and brought our car in. It was quite emotional at the end as it was also Viv Richards’ last game. You could see what it meant to the great man afterwards. As a team it made us realise we were good enough to win things.

My Test debut came in ‘96 at the Oval, just as a few years earlier I’d made my first-class debut for Glamorgan at the venue. I remember turning up at the ground the day before and [England coach] David Lloyd asked us to write some things about ourselves on a piece of paper, but not to put our name on it, and then it was up to the team to work out who you were. So I thought, okay, I’ve got a make a statement here, so I wrote mine in Welsh! We lost the Test match, but that wasn’t a bad Pakistan side – Wasim Akram, Waqar Younis, Mushtaq Ahmed and co.

The board decided that no wives or girlfriends could go on the tour, which led to a bit of discontent especially around the half-way point. That match at Bulawayo was the first Test to end in a draw with the scores level. After it we were all disappointed that we couldn’t finish it off, and that’s when Bumble’s “We flippin’ murdered ‘em” thing came out. We didn’t think much of it as players, but other people went off the high board. Zimbabwe were a good team in those days. The Strang brothers and Flower brothers played, Alistair Campbell as well. At the time it hadn’t really come out what was happening in Zimbabwe, and we weren’t really aware of the effect Mugabe was having. We were presented to him before the second Test in Harare. Looking back now it’s a little uncomfortable, but at the time we weren’t really aware of what was happening.

Going away to New Zealand it’s the one time you’re glad you’re playing cricket, not rugby! I was a bit frustrated first up, I had been the leading wicket-taker in Zimbabwe and then didn’t get the nod for the first Test. In the third Test I got my only Test five-fer. I really enjoyed the partnership with Phil Tufnell, it was the first time I’d bowled with a partner. Before then I’d been pretty much the only spinner in every team I’d played in. We had a pretty similar approach, me and Tuffers. Neither of us considered ourselves massive turners of the ball but we used to pin the batsman down, using flight and guile, and then when we got some turn off the deck we were able to use that as well. To get a five-fer and to win a tour abroad was great.

The game that really stands out from that year was the game at Taunton when we won the Championship. They batted first, then Hugh Morris got a hundred, and Matthew Maynard got a terrific hundred sending it to all parts, then we chipped in down the order. There was a young lad in their team who I got out in both innings, by the name of Marcus Trescothick. Fair to say he was a better batsman three years later! There were about eight lads coming down from my village packed into an Astra, I think they were about 10 minutes from Taunton when we hit the winning runs! In the morning I woke up and it looked like a scene from M*A*S*H. There must have been about 18 or 20 people asleep on the floor of our hotel room, all lads from Glamorgan. I remember going down to reception to pay the extras and they asked “Anything gone sir?” and I said, “Yes, the mini bar.” “What from the mini bar?” “No, the mini bar!” We ended up stumping up for the whole thing.

The final minutes were when the pressure was at its highest. When I first went into bat there was no pressure because we weren’t expected to last very long. I batted for over three hours! They had taken the second new ball and up one end was Allan Donald bowling at the speed of sound and Makhaya Ntini bowling around 82mph. I said to Gus [Fraser, England’s No.11], “I think it’s wise that you take Allan Donald, because it’s harder to pick the ball out of Ntini’s hand.” And Gussy bought it! It was a great feeling to see the job done. 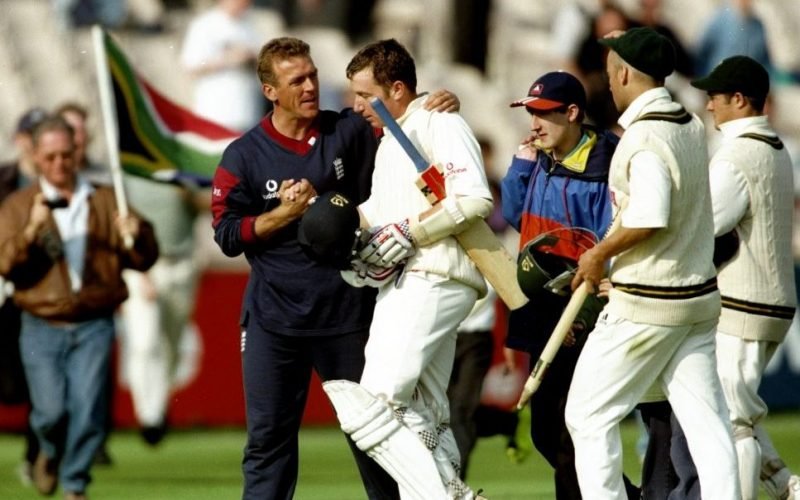 It happened in four different segments. There was the 10,000th run in first-class cricket, then 10,000 for Glamorgan. Then there was 1,000 first-class wickets, then 1,000 wickets for Glamorgan. I think the Glamorgan stats are the most important, I’m only the ninth person to do the double for a single club since the war. I think I got my 10,000th run for Glamorgan at Sussex in 2008, but I can certainly remember my 1,000th wicket for the club. It was at St Helen’s against Leicester in 2010 and I needed three wickets going into that game. I got the first one pretty early on, then the second not too long after that. I then felt the intensity growing. The players on the field were nervous, they didn’t want the chance to come to them and then drop it. I’d like to say it was a perfectly flighted off spinner. However it was a dirty drag down and an edge down the leg side!

I’d decided I was going to leave, I didn’t want to be in a position where I was being offered contracts based on my past, I wanted to earn my place on the team and that season I had. In the first innings I think I got 5-30 and bowled as well as I’ve ever bowled. Crazy how I dragged something out. The second innings was a bit harder, but I managed to get a wicket with my final ball in first-class cricket for Glamorgan. During the game I deliberately kept it quite cold and professional. Then after when I got about 50 yards from the boundary, that’s when it really hit me. On a positive note, I was on empty, I was at peace with it all. I’d left it all out there. There’s a lot of people whose career gets cut short for all sorts of reasons. I walked into Glamorgan as a 15-year-old and I walked out playing at the age of 42, that’s so lucky. Emotional bunkum, but it’s true.