I was about 14, playing in the Under-16s for Perth CC, and I had double the wickets of anyone in the competition but I didn’t get picked for the state because there was this other guy, his mother was the secretary of the club, she was like an old f*****g witch. Her son was a left-armer who couldn’t tie my shoelaces and he got picked because his mother told the people at the WACA, “You can’t pick Mullally, his parents can’t afford the money for him to go on a tour.” So I didn’t get picked and I’m crying because I haven’t made it. My dad sits next to me and says, “Don’t worry, one day you’ll play Test cricket for England.” That was always my goal.

I moved to South Perth, played a couple of A-Grade games and hit this guy in the head with the second new ball. He wasn’t wearing a helmet so he was stretchered off, but he seemed okay. The next night he collapsed down the stairs, went to hospital and had a blood clot in the brain because of me hitting him. He never played again, I’d ended his career. That’s when the sports store at Perth started selling helmets below kiosk price because everyone wanted to wear one. The irony was that the state selectors had been watching the match and I took this fella’s spot in the state second team.

My club captain Wayne Andrews – he played for Western Australia – rings up and says,“How do you fancy coming down to the WACA for a bowl? The lads just need a bit of practice.” I went down there and within 10 minutes I had a camera shoved in my face: “How does it feel to be playing in the Sheffield Shield final?” I followed county cricket really, the Sheffield Shield rang a bell but I didn’t know much about it. I had a bowl at Graeme Wood and Kim Hughes and bowled pretty quick, then I had a bat against Dennis Lillee! After practice Graeme came up to me and said, “Good luck on Thursday, you’re playing.” “In what?” I said. “The Sheffield Shield final.” It was my first-class debut.

The move to Blighty

I had a trial with Hampshire but there was some confusion as to whether I was English or Australian. They wanted to sign me but there was some politics. I went back to Perth and Leicestershire phoned me and said they wanted to sign me. I looked on a map, Leicestershire was near Sherwood Forest – Robin Hood, I’d seen those films, that’d be pretty cool – so I went there. We built something special there. We were runners-up in the Championship in ’94 and won it in ’96 and ’98.

I was told I’d been picked by Sky TV. They said they were sending a reporter down to speak to me about how it felt to be picked for England – I didn’t even know! I phoned my mum and said she’d better talk to my brother … As kids growing up he’d said to me, “Al, no matter where you are in the world, I’ll be there to watch your Test debut.” He got on a flight from Oz on the Wednesday, arrived in England on Thursday morning, and my mate picked him up from Heathrow and drove to Edgbaston. I bowled first change, wondering if he was there, and as I marked my run up at the Pavilion End I looked up into the members’ area, and there’s my brother yelling “Spider!” with a pint in his hand! We won the Test and I took five wickets. 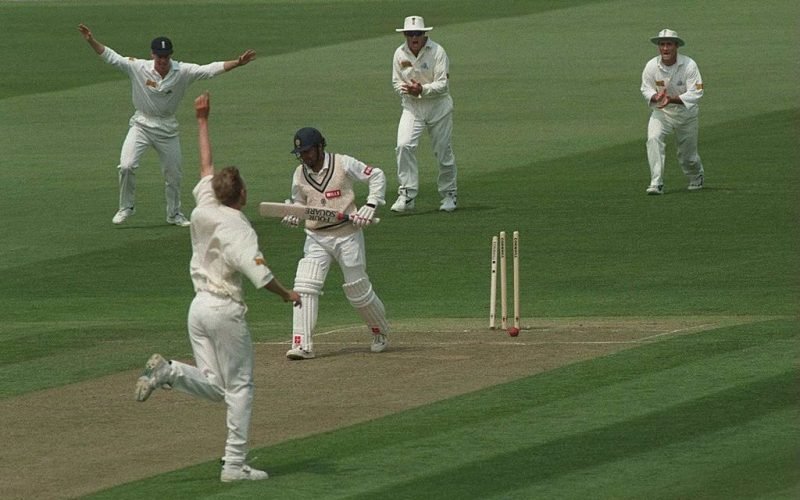 Mullally has Nayan Mongia for his maiden Test wicket at Edgbaston

I enjoyed batting, I loved it. I was just rubbish. I used to work hard on my batting, I just couldn’t do it. I remember having an eye test before the Ashes and the doctor said I had 20/20 vision. I said, “Doc, I haven’t. Have you seen me bat? My eye sight cannot be perfect!” He replied: “Have you ever thought you might just be shit at batting?” Against Pakistan, Bumble offered me 30 pints of Guinness if I got to 30. I got to 20, put my bat and gloves down and started signalling to get the pints ready. Then Waqar bowled me a slower ball on 24. I was devastated!

Every rabbit has its day

I’d got a duck in the first innings [and five ducks in his last six knocks] and was getting bagged for being one of the worst batsmen in world cricket, which wasn’t far off the mark, but then I hit 16 runs and we won the match by 12! I hit McGrath for a few fours and we nearly had a punch up. He got fined a couple of grand as well, but I didn’t get anything because [then coach] David Lloyd said to the match referee, who wanted to fine both of us, that I was the loveliest guy in the world and that I was almost in tears about how it was all so aggressive. The truth was I’d walked into the dressing room, thrown my bat down and said, “Right, you f*****s, let’s bowl these t***s out!” And that’s what we did.

All my boots were worn out and I went to a Nike store in Brisbane and they had these fantastic Jordan 14 basketball boots. I tried them on and thought they were similar to bowling boots but more comfortable, so I bought them. At the Gabba I got some regulation soles put on them, wore them in the ODI, took four wickets [Mark Waugh, Gilchrist, Ponting, Martyn] and got Man of the Match! I played in them for a couple of years. I had a couple of other pairs of Jordan 14s, but they were nowhere near as comfortable as these. They were the best boots I ever wore in my life.

Robin Smith was batting but off strike and he told me he’d heard I was thinking of going back to Hampshire, so I said yeah, I was thinking about it. Then I bowled a ball and he asked what sort of contract I wanted, so I asked what he was offering. I bowled another ball and Smith said, “Well what about this?” I put forward my offer, and then he said we’d negotiate it. I bowled another ball and the other batsman got a single, meaning Smith was on strike for the last ball of the over. Next ball he nicked it behind and as he walked off I said, “Cheers, we’ll have a chat later!”

I knew my rib was broken going into my last Test. I’d got a five-wicket haul for Hampshire against Australia, but it was really sore. Then I did really well in my next game against Warwickshire, so I got picked for the fourth Test, which was at Headingley. I thought if I don’t play, I’ll never play again. I remember before the start of play and at lunchtime and teatime, I met Warnie out the back and he’d slide me a couple of painkillers, and I’d take them each day. I knew that was my last match for England when I drove back down to Hampshire.