Australia’s former rock-hard opener and county cricket stalwart Simon Katich looks back on the matches that made him.

I managed to get 65 not out in the second innings of my first game – a day/night Shield game at The Gabba against Queensland, one of the top teams. Just to be able to bat for a decent period of time in the second innings to save the game with our captain Tom Moody showed me I could handle myself at this level.

We’d won the Sheffield Shield in 1997/98 but the following season we only just snuck in to the final with a draw in Melbourne and I batted for four hours or so for a good 70-odd in the second innings. In the final, we knocked them over on the first day and the wicket got better and better, then it rained. Everything seemed to go for us. Sheffield Shield finals are big occasions at the best of times – probably the only game of first-class cricket I’ve played in that replicates the pressure and importance of a Test. To knock the Bulls over in Queensland was pretty special. It’s one of the games I still look back on now with great satisfaction.

Steve Waugh got injured in the third Test at Trent Bridge and it was between me and Justin Langer for the spot. I had a pretty good tour as a reserve and in the end they picked me to bat at No.6, and I got presented my baggy green by Richie Benaud, with my family and friends from Australia watching from the stands. In the first dig it took me a bit of time to get off the mark; I was pretty patient for the first 20 minutes and finally got a nice full one from Alex Tudor to drive down the ground. But just as I was starting to feel good, I shouldered arms to Darren Gough, who managed to swing one back late and clip off stump.

It was tough to leave Perth; I grew up there and all my family and friends are there, but I wanted to better myself as a player of spin. It was only once I made the move that captaincy was put to me; I’d only do it when Steve Waugh wasn’t around, but I was reluctant to do it because I hadn’t played with the team before. Steve Rixon the coach assured me there wouldn’t be any problems and it turned out that way. We managed to win the one-dayers and the Shield competition as well. Plus, to play with Steve and Mark Waugh and other Australian greats was a big learning curve.

I had a really tough first month at Hampshire where I didn’t know where my next run was going to come from, but then I managed to figure out how to bat on that wicket. I got a hundred against Durham at The Rose Bowl and had to bat for like five hours to get it and that sort of kick-started my season from there. It wasn’t an easy track back then so I took a lot from it. From a development point of view, if you want to play Test cricket then slogging it out over here for six months benefits you immensely.

Darren Lehmann got injured in the previous Test and they wanted someone that could bowl a few overs of spin. I’d had a good last season with the ball for the Blues and earlier with Hampshire so I was picked to bat at No. 6 and bowl a few overs. Luckily the Zimbabweans managed to hit a few down deep square-leg’s throat. I remember a half-tracker got pulled into Ricky Ponting at short-leg. I don’t know how he managed to catch it. It must’ve got caught in his arm hair! It was a lot tougher bowling to the Indians later that summer…

We’d been out in the field for three days, chasing India’s first innings of 705! By the time I did get the chance to bat it was late in day three and I was pretty tired. It was also at my home ground at the time so it was a huge confidence boost for all parts of my cricket. In the second innings, we were trying to hold on and I was in with Steve Waugh, in his last Test. I was the last one to get to bat with him as he got out with an hour left, going strong on 80. But by then we had done enough to secure the draw.

In 2007, I lost my Cricket Australia contract after disappointing in the Ashes and was told they weren’t going to pick me again. After a season with Derbyshire I came back and stated my case. I had a big season with the Blues scoring 1,506 runs [at an average of 94.12] and got my top score of 306 against Queensland. We were chasing the game a bit in the first innings and working to avoid the follow-on. We made the final and I got 80 and 90-odd against Victoria which helped us take home the Shield title.

I got a recall to the Test side for the West Indies tour and I remember thinking it was my last chance. But I knew I had to just try and enjoy it for what it was. I treated it like a bonus and managed to make it count with a hundred batting out of position as an opener. I don’t think it’s a coincidence that my last 30-odd Tests in that period, from 2008, were my best. I was at the top of my game at that time and I notched four Test hundreds that year alone. I felt like I could do anything.

I had a pretty tough time of it against England, in England, to be honest. The tour in 2009 was a big one for us because we had a new team compared to 2005, and I had become one of the senior players. Everyone was a bit nervous at the start, so to lead from the front and start with a hundred – my first and only one against England – was great. But we had England in all sorts of trouble and couldn’t deliver the knock-out blow. In the end, it was the difference between us drawing that series and losing it. 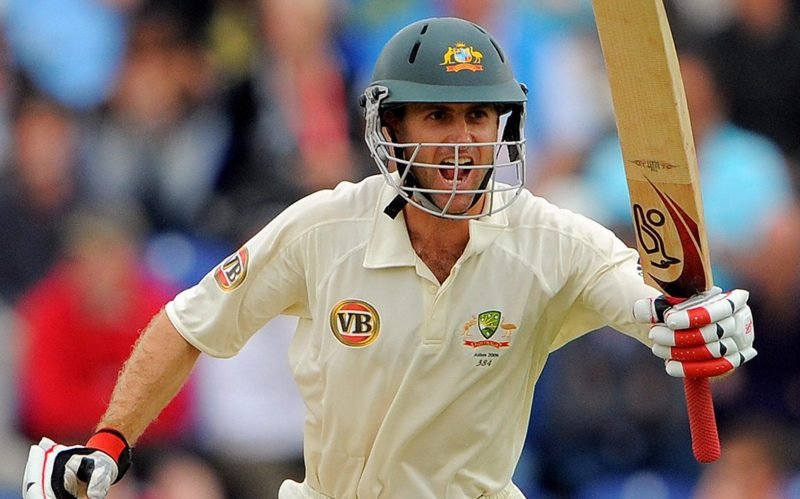 Champions League, having a laugh

It’s not really a form of the game I’m associated with, but I was lucky in that we had a really good squad to work with; senior players like Brett Lee and Stuart Clark as well as the younger ones like Phil Hughes, Steve Smith, David Warner and Moises Henriques performing well. We had a hiccup before the semis against Trinidad & Tobago when Kieron Pollard collared us, hitting 54 off 18 balls. The ball got a bit wet because of the dew which affected our bowlers, so we came back with a plan in the final; who to bowl and at what time to counter the effects. We ended up knocking them over – Pollard out for 26 – despite only posting 159.