For Matt Thacker, the memories of 1979 were all about the excitement of the Sunday League, and a fuzzy recollection of West Indies’ glorious run in the Cricket World Cup.

Memories are treacherous creatures. It’s early summer 1979, a weekend. Us three boys, 9, 11 and 13, are playing cricket in the garden and our little sister, possibly willfully, probably obliviously, encroaches onto the ‘pitch’. Dom hurls the ball in, possibly willfully, probably obliviously, and hits her square between the eyes and she goes down in a heap. I can still feel the icy chill engulfing me, whole body in shutdown – we’d done a bad thing, we’d killed her, we were going to be punished.

Talking to my folks recently, they had no idea which of us had thrown the ball. Did they just forget, did we close ranks, was the bruising actually so minor that it barely registered?

It’s hard to know what’s real, what’s meaningful? Our unreliable memories adapt to fit the world we inhabit. In 2013, artist AR Hopwood started advertising for “false” memories that he would turn into artistic representations. Someone who wrote in believed his girlfriend’s sister had died at the dentist and his “memory” of this meant he kept all his own dental visits a secret.

On the same theme, cognitive psychologist Elizabeth Loftus convinced a quarter of her subjects they were once lost in a shopping centre as a child and in a similar experiment, carried out by associate professor of Psychology Kimberley Wade, 50 per cent of participants “remembered” taking a hot air balloon ride as a child when they were shown doctored photographic “evidence”.

This phenomenon can have serious consequences. Eighteen people in the US have been sentenced to death based on witness testimony before DNA evidence proved them innocent. But mostly false memories are inconsequential (“I’m sure you had the remote last”) and evidence of a healthy brain filling in information gaps.

Sorry, back to 1979. With a warning to treat the veracity of the rest of this piece with caution. It’s obviously easier when you have the internet to fall back on, but who says that’s accurate?

I know Liverpool won the league (again), that Arsenal beat Man Utd in a brilliant FA Cup final finish, that Trevor Francis won Notts Forest and Brian Clough the European Cup, that Maggie became PM, and that Sebastian Coe ran a mile in world-record time, something he probably wishes he could do right now. And then Lord Mountbatten was blown up by the IRA. But these are all TV, quiz show, sports fan memories. Hammered home through repeated viewing, telling, hearing. World Series Cricket? West Indies wearing pink? Batting helmets? Supertests? There’s nothing of these events I can categorically say I remember.

But John Player League on a Sunday. Now that I do remember. Snippets, freeze frames, names, anticipation. For us boys, it was heaven. Ball games or do-it-yourself Superstars in the garden, regularly interrupted with watching what was happening at Old Trafford, Canterbury, Northampton. And this nine-year-old’s heroes? Stuart Turner, John Shepherd, Anton Ferreira, Trevor Jesty, Jim Love, Andy Stovold, Peter Denning, Bernard Reidy, Paddy Clift, Norman Gifford, Ted Hemsley, Graham Barlow. O my Hemsley and my Barlow not that long ago. Why it was these journeymen and not the more obvious stars I took to I have no idea. I’m sure it says a bit about Englishness and a lot about me, but I don’t know what. It’s not like the JPL was short of big-name attractions – England’s stars would regularly pull on their county sweater the day after a Test match and then there were the likes of Imran Khan, Javed Miandad, Clive Lloyd, Gordon Greenidge, Clive Rice, Malcolm Marshall, Zaheer Abbas, Richard Hadlee, Mike Procter, Glenn Turner, Ken McEwan, Viv Richards, Joel Garner – this was the golden age of embedded overseas players, two a side and in for the long haul, with the obvious exceptions of Yorkshire and Glamorgan, with the latter, my memory unreliably informs me, packing their side with as many Joneses as they could muster.

The BBC coverage (black and white in my mind’s eye – not sure if that was the telly or the technology) was introduced by the pipe-smoking Peter West, or Peter Walker, with Jim Laker doing the commentary. There were probably loads of others but I only remember Jim. Stern but warm, he took me through the summer, taught me the rights and wrongs of proper cricket with his gentle admonishments as teams walked off having posted 160 in their 40 overs and knowing they’d probably got enough runs in the bank.

Then it’d be poring over the paper on the Monday – always an extra big sports section on Monday – and scouring each scorecard, assimilating those all-important middle initials that sorted fandom’s men from boys, checking on my favourites, watching the table take shape.

And then, for a glorious fortnight (yes, a fortnight) in June, the World Cup. I’d been too young in ’75 so this was my first. I remember precisely none of the matches leading up to the final. I have no recollection of flags flying as we beat the old enemy on day one, or of dancing in the street when we skittled Canada for 45. But the final, I remember that. It was big, boisterous, brash, blaring and unlike anything I’d ever seen in cricket.

I loved how when England fielded, Gower took one side and Randall the other – it was as if nothing could ever get through. Randall, lovely ragdoll Randall, ran Greenidge out, then Haynes went, and little Kallicharran and big Clive Lloyd too. But then Collis King played an innings that would not have been out of place 30 years later but in 1979 was breathtaking for its violence and power. 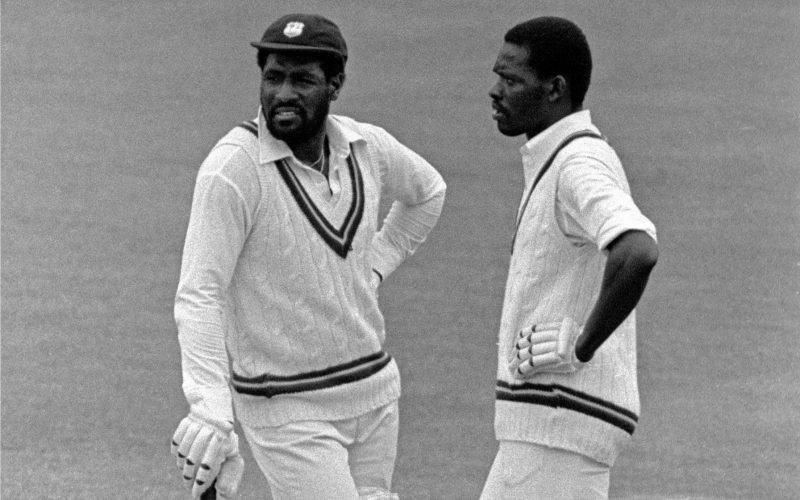 And to finish the innings, Richards walked across his stumps and slapped Hendrick up and into the stands. Hangdog Hendrick, who I loved watching bowl over after over of maidens, just short of a length, jagging away, missing the outside edge by a foot, into the keeper’s gloves. Hendrick, who rarely conceded two an over. Hendrick, who was never hit for six. After that symbolic moment, I knew we’d lost, that a mountainous 280-odd in 60 overs was simply not reachable.

Of England’s reply, I remember mostly the futility. Of my real hero, the dashing Gooch blazing away gamely, bat periscoping, moustache bristling. (I had a white polyplastic DF too…) And then the suddenness of the ending, of stumps all over the place, of thinking how unfair it was that Garner’s arm came from over the top of the sightscreen, even though I had no idea what that meant.

Apparently later that summer, India toured. And we won, although Gavaskar nearly chased down 400-and-something at the Oval. Not a single recollection of that entire series. Funny thing, memory.