Freddie Wilde, CricViz analyst and co-author of the Wisden Book of the Year Cricket 2.0, chooses his T20 team of the 2000s.

The Australian left-hander only batted in 25 innings in the decade – the minimum required to qualify for this team – but such were his performances that he simply cannot be ignored at the top of the order. In those 25 matches – all for Australia or Chennai Super Kings – the belligerent opener scored 1,069 runs at an average of 53 and a strike rate of 144. No batsman recorded a higher average batting impact than Hayden’s +7.0 runs per match from a minimum of 25 innings. Averaging 41 balls per dismissal, Hayden would bat deep and anchor the innings. 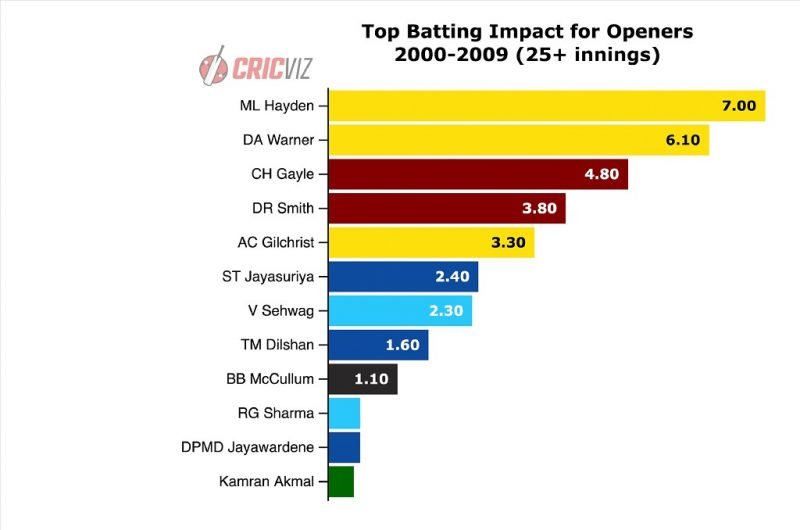 There were a number of superb candidates to partner Hayden at the top of the order: namely David Warner, Chris Gayle, Sanath Jayasuriya, Adam Gilchrist, Dwayne Smith and Virender Sehwag. In the case of the first four, their left-handedness alongside the southpaw Hayden counted against them. In Smith’s case, the fact that a lot of his runs came in weaker leagues in the Caribbean and England hurt his chances. That left Sehwag, who across 52 innings plundered more than 1,000 runs at a strike rate of 158. No opening batsman to have scored that many runs scored them faster. Sehwag was a revolutionary player and is an excellent foil for Hayden in this team. 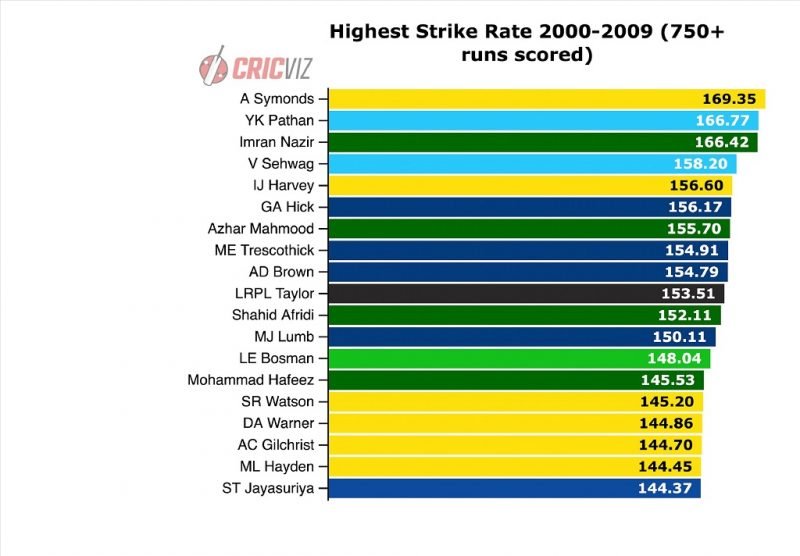 There were two outstanding wicketkeeper batsmen in this decade: Gilchrist and Kumar Sangakkara. Both players recorded identical batting impacts of +3.3 runs per match, but both players fulfilled very different roles. Gilchrist opened the batting in all his innings and was an exceptional aggressor, while Sangakkara batted in the middle order and was slightly more circumspect. The Sri Lankan’s game was more orientated around strike rotation than boundary-hitting. On balance an opening pair of Hayden and Sehwag, with Sangakkara playing the stabiliser at three, makes more sense than either losing Hayden or the right-hand, left-hand combination at the top of the order and having to find another option at number three. Ultimately elite middle-order players such as Sangakkara are harder to find than destructive openers such as Gilchrist.

Pietersen’s outstanding Test career and indeed its controversial end often distract from the fact that he was a superb T20 player. His class is evident in the fact that it took him almost no time to become accustomed to the format: in the 2000s he played 40 innings and scored 1,000 runs at a strike rate of a shade under 140. Pietersen’s batting impact of +3.8 runs per match was the third-highest of any middle-order batsman to have played at least 25 innings, with only those at five and six in this team ahead of him.

Symonds was arguably the first great T20 cricketer. An absolutely monstrous hitter, an outrageously good fielder, a useful bowler and a player with a razor-sharp cricket brain, Symonds is the first name on this team sheet. Batting in the middle order is the hardest job in T20 but Symonds took to it like it was a role he had performed his whole life. Across the decade, he scored 1,216 runs at a mind-warping strike rate of 169, comparable to Andre Russell in the following decade, when power-hitting was far more commonplace. Symonds’ batting impact of +5.7 runs per match was the third-best of any batsmen to have played a minimum of 25 innings, behind Hayden and Warner, both of whom enjoyed the benefits of opening the batting. 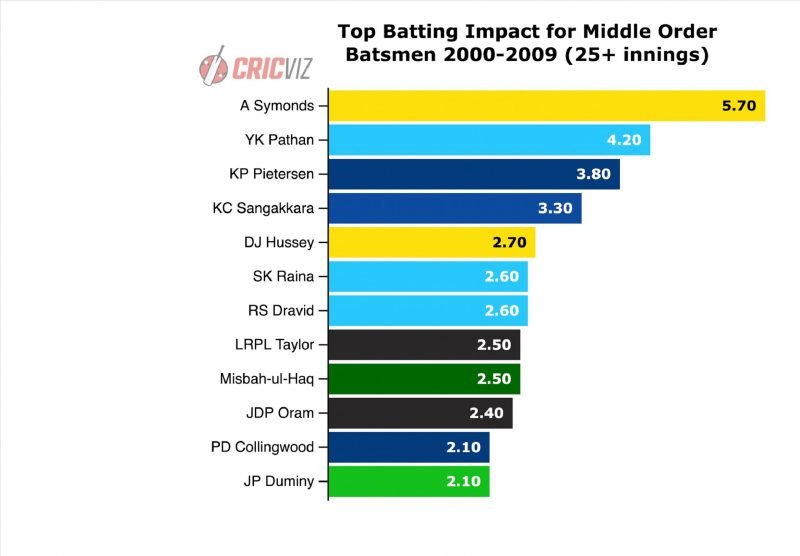 Yusuf is perhaps a surprising entry at number six but there can be no doubting his claim to a place in the team. He was often overshadowed by Yuvraj Singh, another middle-order power-hitter, but at his best Yusuf was even more destructive, less reliant on timing and more on brute strength. In 48 innings in the decade Yusuf plundered 994 runs at a strike rate of 167, bettered only by Symonds in the bracket of batsmen with over 750 runs in the decade.

Sehwag, Symonds and Yusuf lend this team part-time bowling options, but they can’t be relied on for four overs. With bowling strength so integral to success in T20 we have prioritised bowling for the number seven slot. From a minimum of 25 innings, only three spin bowlers in the world recorded a higher total bowling impact in the decade than Shahid Afridi, whose batting also garnered an impact of +1.5 runs per match, making him an ideal option at number seven. Afridi was the top-ranked wrist-spinner according to bowling impact.

The spot for the finger spinner in this team alternates between mystery offie Ajantha Mendis and left-arm orthodox spinner Daniel Vettori, depending on match-ups. Against right-hander heavy teams Vettori is the better option and lends additional batting depth, while against left-hander heavy teams Mendis is the man to pick. Across the decade Mendis returned a bowling impact of +4.5 runs per match, fractionally behind Vettori’s +4.9. Mendis’ carrom ball was a revolutionary delivery that transformed the art of finger-spin bowling, inspiring the likes of Sunil Narine and Ravi Ashwin. Vettori found success through more conventional methods, but both men were exceptionally effective. 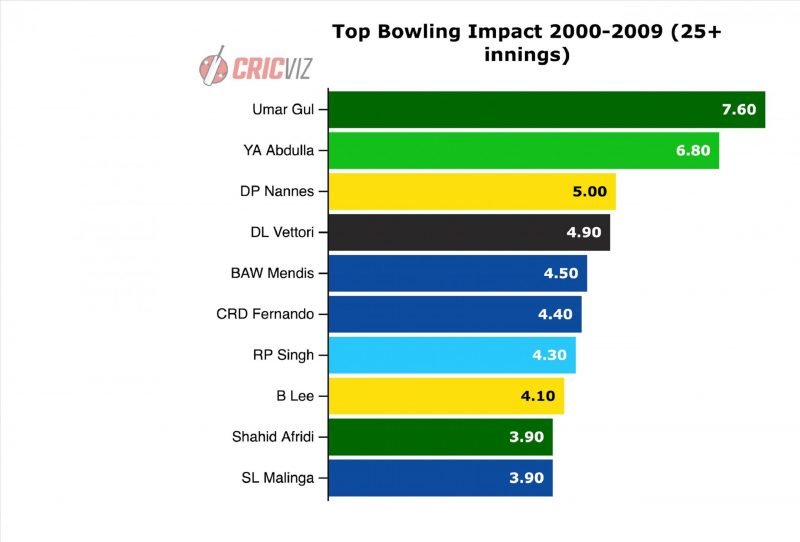 The left-armer Dirk Nannes brings real pace and hostility to this attack and was one of the most impactful bowlers of the decade, bowling for Victoria, Delhi Daredevils, Netherlands and Middlesex. Nannes’ high pace – he was capable of speeds in excess of 150kph – meant he was effective in all three phases of the innings: he swung the new ball effectively, nailed his yorkers at the death and caused considerable trouble through the middle overs as well. In this team he could assume the enforcer role and be used as a middle-overs wicket-taker.

India’s left-arm swing king RP Singh was capable of operating in all phases but was at his most effective in the powerplay, where his left-arm angle, across the right-hander, and ability to swing the ball both ways, meant he challenged both edges of the bat. Early wickets are so valuable in T20 and Singh was one of the most threatening powerplay bowlers around.

No bowler to have played at least 25 matches in the decade returned a higher bowling impact per match than the Pakistani right-armer’s +7.6. Gul combined good pace, attacking lengths and reverse swing in a brilliant combination that made him a menace at the death. Across the decade Gul took 78 wickets in 46 matches at an absurd strike rate of 12.8 balls per wicket and an economy rate of 6.44 runs per over that belied the difficulty of the phases he operated in.