Seymour Nurse made the highest score by a batsman in his final Test innings, 258 for West Indies against New Zealand in 1968/69. A big man who liked to hit the ball hard, Nurse lit up a cloudy Christchurch day with his trademark thumping back-foot drives. “It was some achievement on New Zealand pitches, which tend to favour the bowlers more than in the West Indies or Australia,” said Garry Sobers, his captain and fellow Bajan. “He should have played on much longer than he did.”

However, disillusioned by the West Indians’ poor performances in Australia just before, Nurse had already announced his impending retirement. His own form, if not the team’s, recovered spectacularly: 137 in the final Test at Sydney was followed by 95 and 168 at Auckland, before the Christchurch double gave him an unmatched average, for a player’s last six Test innings, of 115. Sobers had persuaded him to carry on to New Zealand, but failed to convince him to go to England later in 1969 (West Indies lost 2–0). Nurse was worried he would look indecisive if he returned, but also wanted, at 35, to go out on his own terms, after what he felt were earlier injustices in selection. many years later, he declined to take part in a reunion of the 1960/61 tied-Test squads, which some suspected revealed an antipathy to Frank Worrell, the otherwise popular leader on that trip.

Born in 1933 in the exotic-sounding Jack-My-Nanny Gap (later renamed more prosaically as Wavell Avenue), Nurse was a late starter in first-class cricket. Hamstrung by the need to earn a living, he was also faced with a Barbados team containing Sobers and the Three Ws. His game advanced when he joined one of the Ws, Everton Weekes, at Bridgetown’s Empire club, and he finally made his debut for Barbados in 1958, aged 24. Nurse made up for lost time with 128 not out in his second match, against Jamaica at Kingston, and 131 in the fourth, against British Guiana at Bridgetown. And in his next, in 1959/60, he put his name firmly in the selectors’ sights, hammering 213 – and adding 306 with Sobers – in a ten-wicket win over the England tourists. It signalled, according to E. W. Swanton, “the arrival of a batsman with obvious pretensions to the top flight”.

Nurse made his debut in the third Test, and scored 70 at Kingston, where he and Sobers shared another century partnership. But he was left out of the next match when Clyde Walcott was recalled, and dropped again soon after another 70 in his second Test, in Australia in 1960/61. Restricted by injury in England in 1963, he had won only five caps by the time the Australians toured the Caribbean two years later, but finally cemented his place, extending his maiden century, at home in Bridgetown, to 201. The watching Richie Benaud enjoyed Nurse “several times playing that magnificent cover-drive that he hits between point and cover, and playing it so well that the Australians applauded every time”. 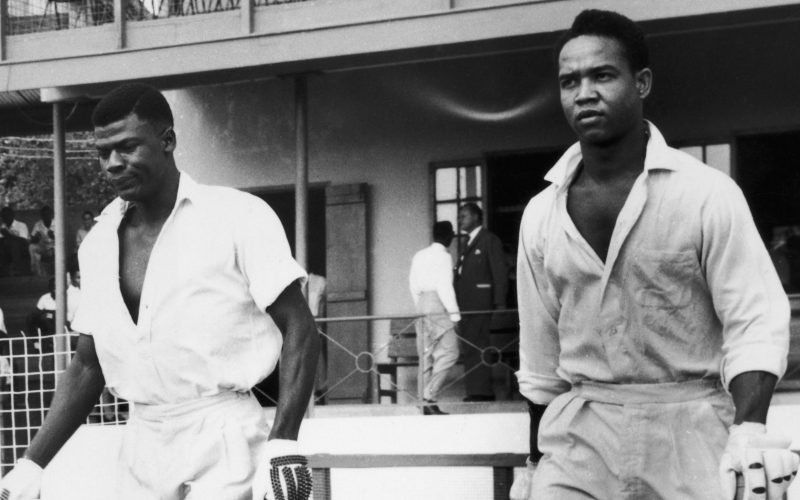 Seymour Nurse (left) and Garry Sobers walk out to bat for Barbados at Kensington Oval, Barbados, 1965

In England in 1966, Nurse added 137 at Headingley, where he and Sobers rescued West Indies with a fifth-wicket stand of 265. He had also made an important 93 on the first day of the previous match, at Trent Bridge, and finished that famous series with 501 runs; only Sobers (722) made more. A keen footballer, Nurse attended several World Cup matches, including the final between England and West Germany. He did enough to be named as one of the Wisden Cricketers of the Year. The accompanying essay observed: “He established himself in the eyes of the English followers as a strokemaker fit to line up with credit beside the likes of George Headley, Frank Worrell and Everton Weekes.”

Another productive time followed at home in 1967/68, even though he opened in four of the Tests: in the Fourth, back at No. 3, he hit 136, this time sharing a stand of 273 with Rohan Kanhai. Nurse was more restrained than usual, “content to leave the stage to his dapper and brilliant partner”, according to John Woodcock in The Times. However, Sobers’s capricious declaration handed England the series 1–0. The cracks were beginning to show in what had been a successful team; little more than a year later, Nurse had retired.

He played a few more matches for Barbados, bowing out with 76 (and a duck) against the 1971/72 New Zealand tourists. He went into coaching, was a Test selector for a time, and managed the West Indian Under-19 side. Desmond Haynes, one of his charges, recalled: “We used to walk like Seymour, try to bat like him, and try to talk like him.”

Sobers had no hesitation in naming Nurse at No. 4 in his best West Indian side for a 1988 book. At the time, Nurse was 53, and still playing Over-40s cricket. “I reckon he is still good enough to play for Barbados,” said Sobers, “so good is his technique.”