West Indies’ tour of England in 1950 proved to be a breakthrough. After winning the series 3-1, four of their players were named as Wisden Cricketers of the Year, including the legendary Everton Weekes.

Perhaps no batsman since Bradman has made such an impression on his first English tour as a ruthless compiler of big scores as did Everton De Courcy Weekes of the West Indies in the 1950 season. There were many sceptical of his ability to reproduce on English county grounds the form by which he made so many high scores at home and broke records in India and in Lancashire League cricket.

Weekes, in a predominantly wet summer, soon proved them wrong by revealing a propensity for reaching his hundred and settling down for another hundred by methods heartbreakingly safe from the bowlers’ point of view yet aggressive enough to carry his score along deceptively fast and afford the richest entertainment to the spectators.

By mid-July he had reached three figures five times, and not once did he stop short of a double-century. In detail his scores were 232 v Surrey, 304 not out v Cambridge University, 279 v Nottinghamshire, 246 not out v Hampshire, and 200 not out v Leicestershire. It came almost as a shock to his admirers when he was out at the modest total of 129 in the Nottingham Test. 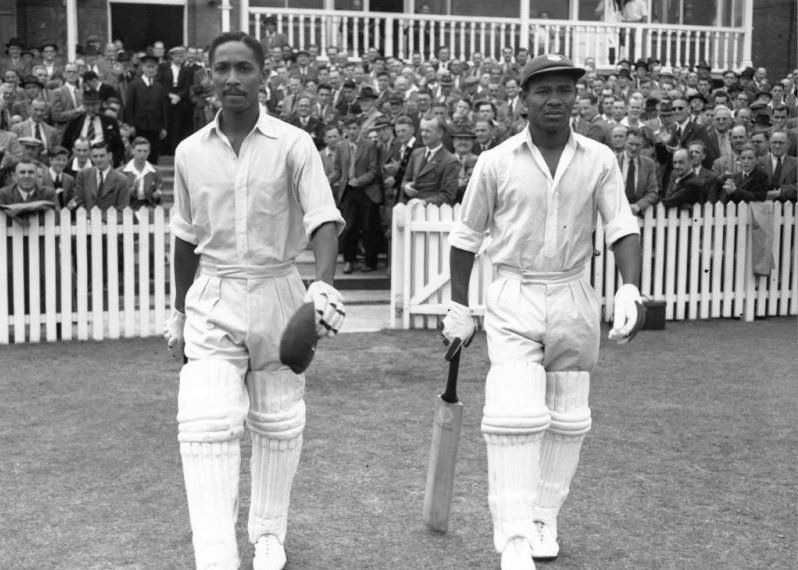 Frank Worrell (left), and Everton Weekes walk out to bat at Trent Bridge

By the end of the summer he had equalled George Headley’s 1933 record for the West Indies of seven centuries on an English tour by hitting 147 off the Glamorgan bowlers. With 2,310 runs for an average of 79.65, Weekes failed by ten runs to equal Headley’s aggregate for the 1933 tour, but he played five fewer innings.

Weekes evoked comparison with Headley, whom he resembled in his compact build. Both showed the same instinct to dominate the bowling, and seldom indeed did Weekes allow any attack to tie him down to defence for long, although he was not so resourceful nor equipped with quite such a wide range of strokes as Headley. Yet the resemblance was strong, and it was fitting that Headley, now in the autumn of his career, should have deputised for Weekes as the professional of Bacup in the Lancashire League while his young compatriot trounced the bowling in first-class games.

Weekes possessed in full measure those gifts which are the hallmark of all really great batsmen – exceptional quickness of eye and foot – so that he always had more than average time to make his strokes. Correct and sound in defence, he was extremely punishing in attack, and showed special strength in strokes off the back foot. Despite his short stature, strong forearms and wrists enabled Weekes to cut, pull and drive tremendously hard, and seldom did he lift the ball. Many bowlers must have been astonished at the speed with which the ball hurtled straight back past him from a typical back-foot drive, and he also drove past cover most effectively off the back foot.

He dealt summarily with any short leg-side balls with a fierce and well-controlled mid-wicket pull, and rarely hit the ball to square leg or finer. Perhaps the most attractive of Weekes’s strokes, and his own favourite, was the square cut, which he made with remarkable power and, on a fast and true pitch, often with great daring. In the field, Weekes possessed the virtues of exceptional quickness of foot and anticipation, plus very safe hands. His natural bent and preference was cover point, but he proved a top-class slip fielder during the English tour when the spin of Ramadhin and Valentine so perplexed the opposition batsmen.

Born at Bridgetown, Barbados, on February 26, 1925, Weekes is a cousin of Kenneth Weekes, the left-handed batsman of the 1939 tour. He took naturally to cricket like many other West Indies youngsters, and first played in an organised game at the age of 12 for the St Leonard’s School side. The obvious natural ability of Weekes, who was never coached, first aroused interest during the war years when he served with the Barbados battalion of the Caribbean Regiment. He caught the eye of E.L.G. Hoad, the former West Indies Test player, and, as an opening batsman, made his first-class debut for Barbados at the age of 18.

A modest young man of few words, who seemed far happier talking about his team-mates than discussing his own career, Weekes attributed much of his rapid development to the interest and encouragement of the Barbados captain, T.N. Peirce. His Test career began, comparatively quietly, during the MCC visit of 1947/48, when he played in all four matches. His form in the first three games, when his highest score was 36, did little to indicate the remarkable feats which lay ahead, and he was omitted from the original choices for the final Test, but regained his place as Headley was unable to appear. 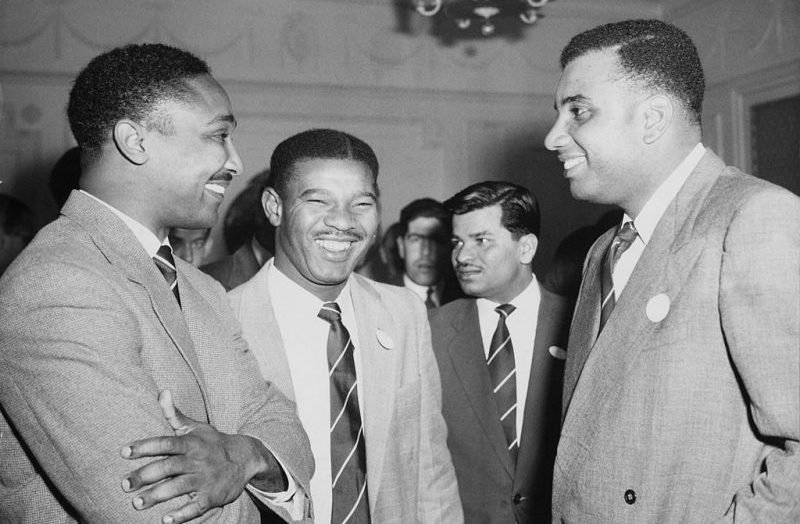 He vindicated himself with a dominating innings of 141, driving magnificently, and this proved the first of five consecutive Test centuries, a world record, for Weekes reached three figures in his first four Test innings in India during the following winter. He equalled yet another Headley feat by becoming the second West Indies batsman to make two centuries in a Test, 162 and 101 at Calcutta in the third game, and his 162 on a grassy pitch in the first innings he considers the best of his career. In the five Tests in India he scored 779 runs at an average of 111.28.

In England, his Test scores were less prolific, and he finished below Worrell and Rae in the averages, with 56.33 for 338 runs. Yet he figured in another Test record, for his fourth-wicket partnership of 283 with Worrell at Nottingham was the biggest stand made for West Indies in any Test. Weekes shared in two other fabulous stands with Worrell, 350 for the third wicket at Fenner’s against Cambridge University, and an unbroken third-wicket partnership of 340 against Leicestershire.

The Cambridge stand set up a West Indies record for any wicket in England, and Weekes’s 304 not out was the highest by a West Indies player in this country. At Leicester, Weekes reached his century in 65 minutes, the fastest of the season. If anything is certain in cricket, it is that this likeable player, so dominating at the crease and so quiet off the field, will continue to break batting records.

Wisden’s prediction turned out to be on the money; Weekes continued to be a mainstay of the West Indies side until 1958. He scored 4,455 runs at 58.61 with 15 centuries.