George Headley delighted crowds with his outstanding batting on West Indies’ 1933 Test tour. He was named a Wisden Cricketer of the Year the following spring.

George Alphonso Headley, born at Panama on May 30, 1909, is beyond all question the best batsman the West Indies have ever produced. Paying his first visit to England with the West Indies team last summer, he landed on these shores with a name already established. That the reputation which preceded him was in every way justified he quickly proceeded to demonstrate, and returned home with his fame considerably increased.

Learning his cricket at school in Jamaica, Headley, in common with the other boys, had largely to fend for himself. There was nobody who could give the lads any coaching or mould their style, so that of Headley it can truly be said he is a self-made batsman. An important year for him was 1927 when for the St Catherine Cricket Club, Jamaica, he first played in big cricket. In 1928 further distinction came his way, when at Melbourne Park, Kingston, against the Hon. L.H. Tennyson’s team, and at the age of 19, he scored 211 with only one chance, he and M. Morales adding 215 for the second wicket.

Later on, in another game against the Englishmen, he hit up 71. He did not, however, succeed in being chosen for the West Indies team which visited England in that year, but it was quite obvious that a new batting star had arisen, for in March 1929 he obtained 143 against a strong combination taken to the West Indies by Mr (now Sir) Julien Cahn.

In January 1930, Headley made his first appearance in the highest company, and against the MCC team scored 21 and 176, thus enjoying the distinction of making a century in his first match for his own country. He was not successful in the next big match, but in February, at Georgetown, British Guyana, he put together scores of 114 and 112, so joining an extremely select band of cricketers who have made two separate hundreds in a Test match. Good scores for Jamaica followed and then in the succeeding representative encounter Headley, dismissed for 10 in the first innings, hit up 223 in the second. His batting average during that tour was over 87 for eight innings and his aggregate 703.

During the winter of 1930/31, Headley was one of the team of West Indies cricketers who toured Australia. Again he proved a great success, for, although Grant, his captain, was just above him in the batting averages for Test matches, Headley easily came first in all first-class matches, scoring 1,066 runs in 25 innings and, with 131 as his highest score, averaging over 44. 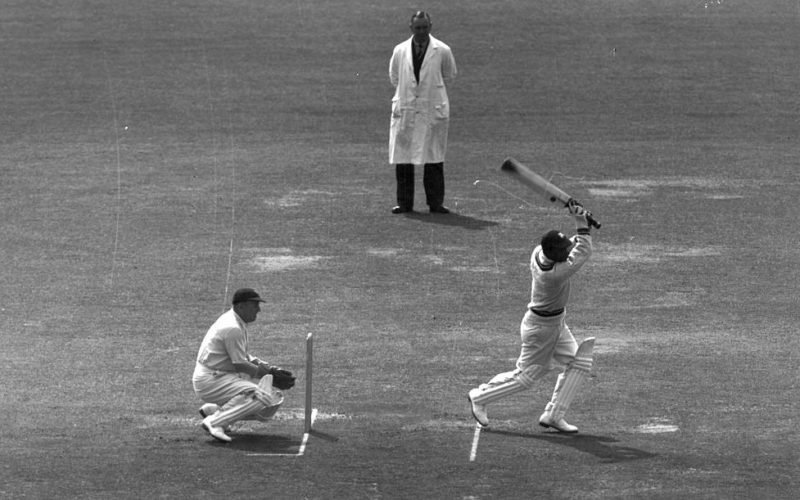 In the course of the tour he made four hundreds, two of them in Test matches and the other two against Victoria. All the critics in the Commonwealth were agreed that he stood out by himself as a batsman. Returning home, Headley in the March of 1932 accomplished a series of great performances against Lord Tennyson’s team in Jamaica, by scoring in four innings 344 not out, 84, 155 not out and 140. The innings of 344 is, it is hardly necessary to state, the highest ever made by a West Indies cricketer.

It will thus be seen that in the course of a very short career, this wonderful young batsman has achieved a measure of success usually spread over the lifetime of other famous cricketers. Last summer in England he headed the batting averages for his team both in Test matches and in first-class games. During the season he scored seven hundreds, with a highest of 224 not out against Somerset, and in 38 innings averaged over 66.

Among the landmarks of what for him was almost a triumphant march could be numbered the fact that on the occasion of his first appearance at Lord’s he scored 129 against MCC. A blow on the chest from a rising ball kept him out of the next three matches, but resuming he made 129 at Cardiff, this being followed by his big innings at Taunton. In his first Test match in this country, at Lord’s he made only 13 in the first innings, but scored 50 at his second attempt. Another event in his career which must have given him the utmost satisfaction was his superb innings of 169 not out in the Second Test match, at Manchester. Altogether, in the three Tests, Headley scored 277 runs with an average of over 55. He failed at The Oval, but he had already done enough for glory.

Built on small lines Headley yet had power in hitting, his timing of the ball being, for the most part, perfect. Happily for him, he had a fine hot summer with hard wickets for his first experience of batting under English conditions, so that it was not in the least surprising he did so well. It was the considered opinion of most good judges that few men in present-day cricket watched the ball so far on to the bat. This, of course, made him a very difficult man to dismiss.

He drove, cut and hit to leg with equal certainty and power, but the outstanding feature of his batting – the one by which he will be longest remembered – was his facility for going back to his right foot to drive to the on, and the manner in which he placed the ball almost exactly where he wanted. Altogether, with his smart fielding and at times, useful slow bowling, a very remarkable cricketer.