Lala Amarnath was a seminal figure in the history of Indian cricket – even if his career was seldom far from controversy.

“Lala” Amarnath scored India’s first Test century and went on to become Indian cricket’s patriarchal figure: as selector, manager, coach and broadcaster, as well as in a literal sense – his three sons became first-class cricketers and two played in Tests.

Amarnath, a Punjabi, was also the first to kick against the stifling domination of Indian cricket by the local princes and their imperial backers. It severely damaged his career. Amarnath’s figures in his 24 Tests are nothing special, but they do no justice to either his spasmodic brilliance or his enduring influence.

From a poor background in Lahore, when it was still part of India, he rose to prominence by scoring 109 (“a brilliant display” – Wisden) for Southern Punjab against MCC in 1933/34, and a few weeks later became a star with a century on his Test debut, India’s first Test at home, at the genteel old Gymkhana ground in Bombay.

With India facing an innings defeat, he took on the England attack and played, so he said later, “as if possessed by a mysterious power”. He hit 83 in 78 minutes, hooking Nichols and Clark with confidence and going down the pitch to hit Hedley Verity. Slowing just a fraction, he reached his century in 117 minutes. According to Mihir Bose: “Amarnath was engulfed with spectators, garlanded and congratulated while the band played ‘God Save the King’… As the day’s play ended, women tore off their jewellery to present it to him, Maharajahs made gifts of money, and India hailed a hero.” England’s eventual easy win was almost forgotten in the hysteria.

Though he did little in the remaining two Tests of that series, Amarnath was by far the best player – with bat and ball – in the early stages of the unhappy Indian tour of 1936, captained by the Maharaj Kumar of Vizianagram (“Vizzy”). Furthermore, Amarnath knew he was the best player and, having waited, padded up, during an unusually big partnership in the match against Minor Counties at Lord’s, he was infuriated to be told that other batsmen would be promoted ahead of him. He swore at the captain and tour treasurer, and was sensationally sent home. 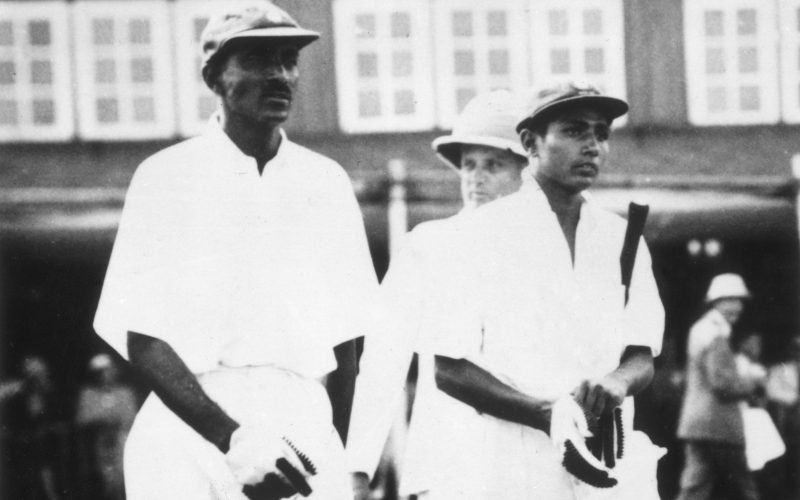 Lala Amarnath (right) walks out to bat with CK Nayudu against England in Bombay, circa 1933

The team’s subsequent failures, a commission of inquiry, and history as written by people with a more egalitarian world-view than Vizzy have all combined to exonerate him. But it meant a 12-year gap between his third Test and his fourth.

He remained a force in Indian cricket, however, scoring 241 for Hindus v The Rest in 1938/39. But when he visited England with the 1946 team, by then rehabilitated, his bowling was more potent than his batting, most dramatically in the first post-war Test, at Lord’s, when he reduced England’s first innings to 70-four by dismissing Hutton, Washbrook, Compton and Hammond. “After a shuffling run of only three paces, he bowled off the wrong foot,” said Wisden with slightly shocked admiration, “but he kept an almost impeccable length, moved his in-swingers probably more than any bowler in England, and mixed these with a cut leg-break of some venom.”

“He was an impetuous man, quick to love and quick to fight”

The following year he was appointed India’s captain for their first tour of Australia when Vijay Merchant withdrew. But with Bradman at his most merciless, India were understandably overwhelmed. Amarnath did little himself in the five Tests, averaging 14 with the bat, and taking 13 wickets, although he was magnificent against state sides. His 228 against Victoria contained, Neil Harvey said, the best cover driving he ever saw.

He remained captain against West Indies in 1948/49 and in Bombay narrowly failed to lead India to their first Test victory. Then cricket politics again turned against him. There were arguments about money and second-class treatment (the visitors were treated royally; Indian players were dumped in second-class hotels). Amarnath fell foul of the powerful board secretary, Anthony De Mello, who was furious with the man he had dragged “out of the gutter and made captain of India” and had him suspended for “continuous misbehaviour and breach of discipline”. 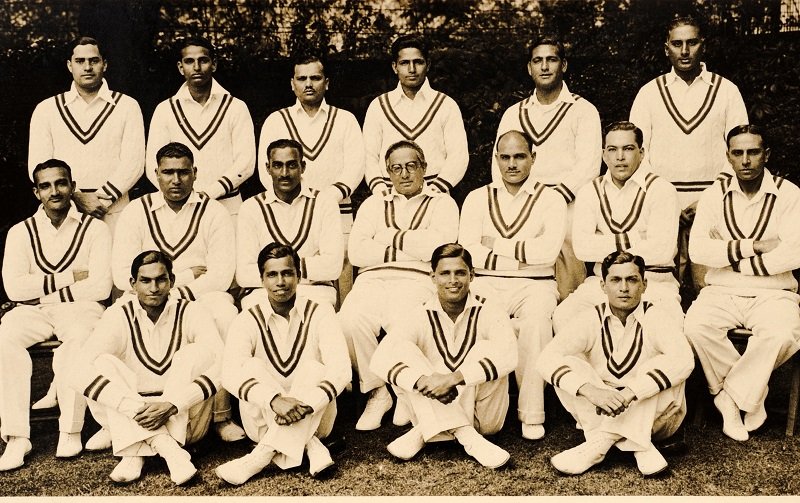 The India team, led by Maharajah of Vizianagaram, pictured in London during their 1936 tour of England. Lala Amarnath is standing fourth from left

Amarnath sought refuge in the Lancashire League. But he was buoyed by support from Bradman, who called him “a splendid ambassador”, and by De Mello’s subsequent fall from power. He was restored, though reduced to the ranks, in 1951/52 and took part when India at last won a Test, against England in Madras; passed over for the humiliating 1952 tour of England; and then given back the captaincy against Pakistan in 1952/53, apparently at the insistence of – of all people – Vizzy.

Although India won their first series, Amarnath’s contributions as a player were minor, and yet more internal machinations meant he left the job in anger. However, the wheel keeps spinning in Indian cricket and Amarnath’s reputation grew with the years. He became chairman of selectors, most famously insisting on the inclusion of off-spinner Jasu Patel at Kanpur in 1959/60, which led to a historic win over Australia.

Lala also supervised the development of his sons: Surinder, too, made a century on debut; Mohinder (“Jimmy”) played 69 Tests. He was a well-informed and humorous commentator, and in old age he acquired widespread affection as the nation’s leading source of cricket anecdotes. But he never lost his habit of speaking his mind. “He was an impetuous man,” said his contemporary, Mushtaq Ali, “quick to love and quick to fight.” The Indian prime minister, AB Vajpayee, called him an icon.