Neil Harvey, the last survivor of Bradman’s 1948 Invincibles, is 91 this month. He was a Wisden Cricketer of the Year after his second Ashes tour in 1953.

Sport can provide few spectacles as exhilarating as that of a gifted left-hand batsman tearing to shreds bowling which has subdued only slightly less skilled players. Upon the retirement of Bradman, the mantle of Australian batting champion passed to Robert Neil Harvey of Victoria, whose ability to change a game’s outlook by blistering attack rivals that of his former Test captain.

When, in 1953, Harvey returned home from his second visit to England, few cricketers had accomplished so much by the age of 24. Beginning at 19, Harvey had played for Australia in 29 Tests, twice been on tour to England and once to South Africa, set up a number of batting records, and given infinite pleasure to hundreds of thousands of cricket-lovers in various parts of the world. All this he accomplished without changing one iota from the quiet, unassuming, non-smoking, non-drinking lad who saw his first ball bowled in Test cricket when, at 19 years of age, he was chosen as Australia’s 12th man for the third Test with India.

Harvey, the second youngest of six boys, was born at Fitzroy, Melbourne, on October 8, 1928. In a household such as his, any lad not gripped by the fascination of cricket would have been unnatural. Cricket and cricket talk formed as integral a part of the daily round as eating and sleeping. His father, who held the family batting record with 198 for Broken Hill, a mining town in New South Wales, still scored freely in club cricket, and, almost as soon as he could walk, Neil joined the family contests, played with a soft ball in a cobbled stone lane near the house. 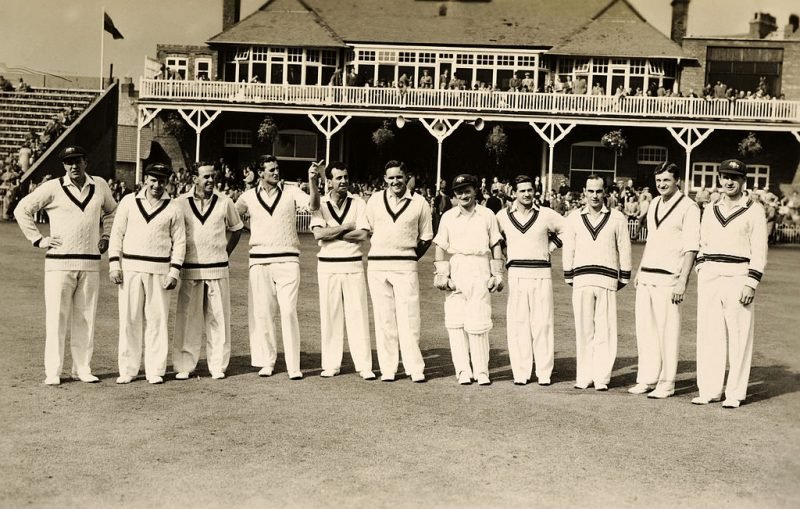 The Australian cricket team in 1956. Neil Harvey is fourth from right

At nine, Harvey played his first game, as a wicket-keeper-batsman, in the North Fitzroy Central School team, whose average age was 14. Among several centuries he hit for the school was one of 112 out of 140 in a school’s final against Mont Albert. When twelve, he joined the local Fitzroy club, playing first for the fifth team. Within two years he rose to the first eleven. By that time he had moved to Collingwood Technical School, where he added to his growing reputation as a batsman and a wicketkeeper.

On the advice of the Victoria coach, Arthur Liddicut, however, Harvey gave up wicketkeeping to concentrate on batting, and at 18 he was picked for the State team, against New South Wales. His first innings ended in rapid failure, without the satisfaction of breaking his duck. A happier omen was that WA Johnston, one of Australia’s superb bowling trinity of post-war years, was Victoria’s 12th man. Johnston held the same post when Harvey made his Test debut. They have been roommates and close friends ever since. In his second match for Victoria, Harvey played against WR Hammond’s MCC team. Three wickets went cheaply before he joined the captain, AL Hassett. With no trace of nerves, Harvey dominated a partnership of 120. His opponents expressed no doubt that a Test cricketer of the future had arisen. 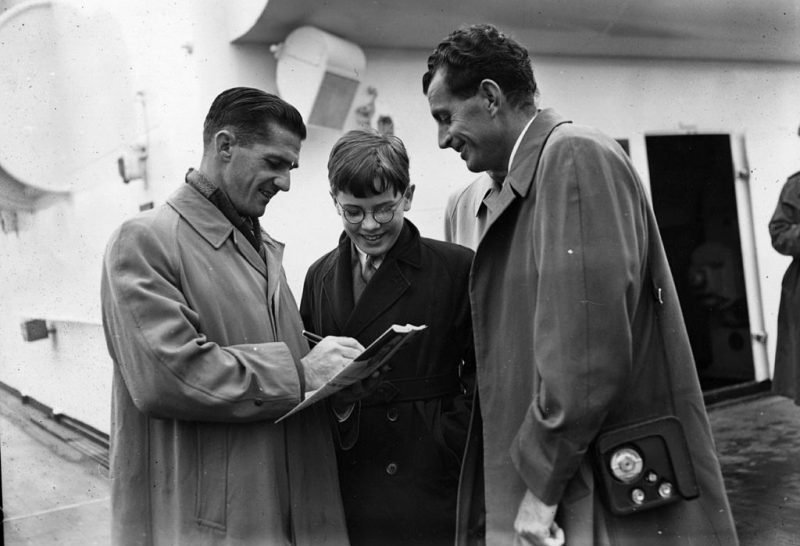 Next season three of the six Harvey brothers, all of whom played for Fitzroy, appeared together in two States games. Mervyn had already been honoured with Test selection, against the 1946/47 English team, but the younger Neil began to attract more attention, and three months after his 19th birthday he made his entry into international cricket, in the last two matches against India. His dazzling 153 on his home ground at Melbourne Stadium in the fifth Test was Harvey’s first century in three-day cricket. His place for the tour to England became automatic.

At first, the turning pitches in England troubled him, but, as soon as he adjusted his game, he played many brilliant innings and won a place in the side for the fourth Test, at Leeds. The Australian position was precarious when Harvey, still 19 and the youngest player in the party, joined Miller at the wicket. Three wickets, including Bradman’s, had gone for 68 in face of an England total of 496.

Defence was expected and would have been justified. Australia’s two young cricket cavaliers were in no mood for dead-bat play. Instead, they scattered England’s attack in hurricane assault which brought Australia 121 runs in an hour and a half. Harvey, whose second successive Test hundred contained seventeen fours, then shared another century stand, with Loxton. Unmistakably, Harvey had arrived as a Test cricketer and to the end of the 1953 tour of England, he did not miss a Test.

He plays all his strokes, and they are many, with the utmost force, and even some of his defensive hits cause nearby hands to sting

On his second visit to England, Harvey showed that, without losing any of his youthful spirit of adventure, he had blended it with experience and polish. His 10 hundreds, twice the number of anyone else in the side, raised his first-class total to 31. The composition of these reveals Harvey’s flair for rising to the more important occasion. Twelve were from South African bowling, 14 in England, one against India, and only four in Sheffield Shield cricket.

Although essentially a batsman glorying in an attacking game, Harvey is capable of long stretches of defence when the situation demands. The third Test against South Africa at Durban in 1949-50 provided such an occasion. Australia, having been dismissed in the first innings for 75 and having lost three for 59 on a crumbling pitch in the second, looked to be on the brink of defeat. The task of making 336 to win seemed out of the question. For five hours and a half, Harvey disciplined himself to the battle and by a literally flawless innings of 151 not out he carried Australia to victory.

Normally this small, compact young man is the fastest scorer on his side. He plays all his strokes, and they are many, with the utmost force, and even some of his defensive hits cause nearby hands to sting. Harvey is always looking for runs and always hoping for something to pull. He also revels in the drive and square-cut. He is the most punishing left-hand batsman to have visited England since B Sutcliffe and MP Donnelly of New Zealand in 1949. Some of Harvey’s innings on slow pitches give the lie to those batsmen who blame groundsmen’s preparations for most of the dull batting which is all too common. If Harvey has a weakness, a good-class swing bowler, on an English green pitch, is the most likely to exploit it. At times, he puts his right foot down the pitch and slashes across the flight of the ball, but, while he retains his youth and certainty of eye, the habit might not be so costly as if he were older.

When not abroad on cricket tours Harvey plays baseball in the close seasons for Fitzroy. Twice he has been in an Australian named baseball team – one which is named for the distinction thus accorded, but which plays no matches. As a baseball infield, Harvey developed his half round-arm throw, the speed and accuracy of which have cost many batsmen their wickets. Baseball training was also responsible for his habit of catching the ball above his head. For him to miss a catch is so rare as to excite comment.

The theory of this method of catching is that the catcher need never take his eyes off the ball and, should it bounce out of his hands the first time, he will stand a good chance of a second attempt. Seeing that Harvey also covers ground quickly and is magnificently swift and certain in picking up and returning, he merits the description of the finest outfielder in the world. Off the field, Harvey is a sports goods traveller. He was married on his return to Australia.