Hedley Verity was quick to make his mark in Yorkshire cricket. After just two seasons in the game, he was named a Wisden Cricketer of the Year in 1932.

Hedley Verity, the Yorkshire left-handed slow bowler, who, if yet lacking the phenomenal skill of Wilfred Rhodes, is rightly regarded as the natural successor to that famous player, ought by reason of his birth-place to have cricket in his blood. He was born on May 18, 1905, at Headingley within a mile of the ground where so many great matches have taken place.

Verity has jumped to the front in his own class of bowling very quickly indeed, his career in first-class cricket having lasted so far less than two seasons.

He played first towards the end of May in 1930, at Huddersfield in the friendly match against Sussex and while, owing to another engagement, he could not secure a regular place in the eleven, he met with such success that he finished at the top of the Yorkshire bowling figures, taking 52 wickets for less than 11.5 runs apiece.

In that year he accomplished some notable performances, obtaining nine wickets for 60 runs in the second innings against Glamorgan at Swansea, while against Hampshire at Bournemouth he dismissed 13 batsmen for 83 runs, and in the return with Sussex at Brighton had nine wickets for 104 runs.

Such good work clearly demonstrated that Yorkshire, just as when Rhodes followed Peel, had at once found a fine left-handed bowler and last season Verity went right ahead. Again he was really top of the bowling figures with 138 wickets at an average of less than 12.5 runs per wicket. Admittedly circumstances were in his favour because of the number of rain-affected wickets on which he had to bowl, but he took full advantage of the opportunities that came his way. 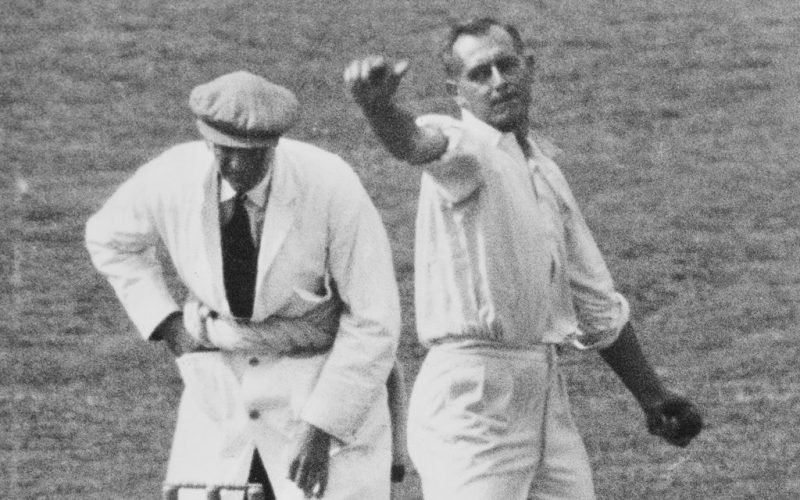 Hedley Verity in action against Surrey, circa 1937

His outstanding performance during the season was at Leeds when, after taking three wickets for 61 runs in Warwickshire’s first innings, he obtained all ten in the second for 36 runs. By a happy coincidence this success came to him on his birthday.

Other notable feats followed – six for 32 against Somerset at Dewsbury, six for 11 against Surrey at Bradford, six for 21 and eight for 33 against Glamorgan at Swansea, and six for 52 and seven for 93 against Sussex at Brighton in his last county match. He played for the Players against the Gentlemen at Lord’s and the Oval and later in the season enjoyed the distinction of being in the England team against New Zealand at the Oval and at Old Trafford. 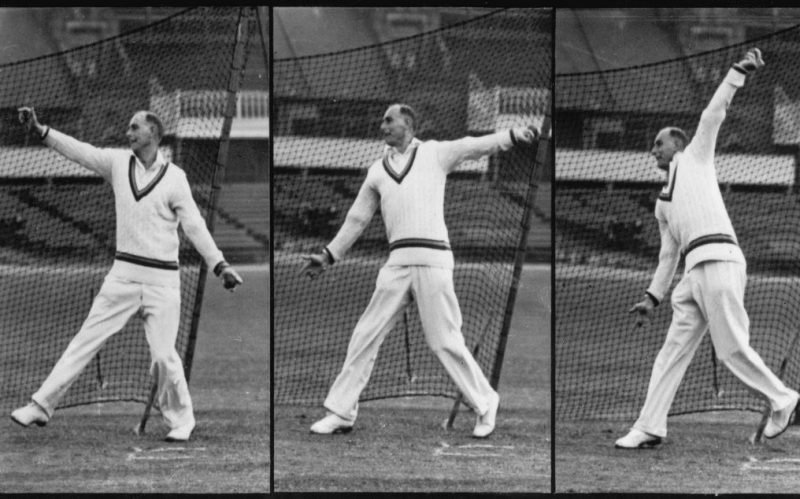 There is no doubt that in once again carrying off the Championship, Yorkshire owed a great deal to the fine work accomplished by their left-hand bowler. Verity does not yet suggest the ability to flight the ball which was such a marked characteristic of Rhodes’ bowling, but he has fine finger spin and accuracy of length, while now and again he sends down a faster ball which goes with his arm.

It is greatly in his favour that, unspoilt by success, he realises that he still has a good deal to learn, particularly in the subtle variation of his pace and flight which can only come by continuous practice. Happily he has avoided the fetish of the swerve. 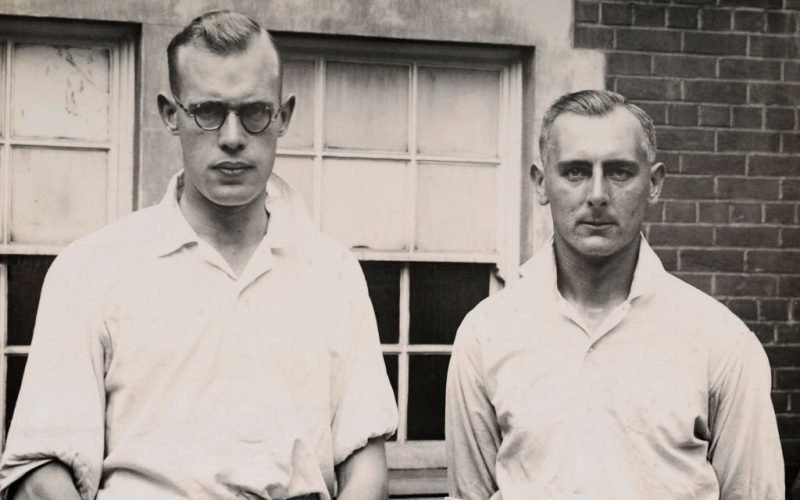 Verity with his Yorkshire and England teammate Bill Bowes at Headingley, circa April 1932

In his boyhood he played for Yeadon and Guiseley Secondary Schools, and afterwards assisted Rawdon as an amateur in Yorkshire Council matches. His first professional engagement was in 1927 with Accrington in the Lancashire League, while in the following three years he played for Middleton in the Central League.

It was while he was with Middleton that he first appeared for Yorkshire. Previous to going to the two Lancashire clubs, he had, in 1926, been asked to appear at the nets at Leeds, where he came under the notice of George Hirst, and played on and off for the Yorkshire Second Eleven.

Related Story: How are Pakistan’s stars faring in the County Championship?

Verity is the first to acknowledge the debt he owes to Wilfred Rhodes for much valuable advice given at a time when it was most likely to be of the greatest service in helping him indeed to become one of the best left-hand slow bowlers of the day.

Hedley Verity went on to become one of Yorkshire and England’s greatest slow bowlers – he took 144 wickets at 24.37 in just 40 Tests. In 1934 he bowled England to their only Ashes victory at Lord’s in the 20th century. On 12 July, 1932 he took 10 for 10 against Nottinghamshire. To this day, they remain the best bowling figures in all first-class cricket