David Gower, speaking to The Cricket Podcast, has recalled the time he had a drinking night with Ian Botham on the eve of an ODI in South Africa, and had to be sent back to his hotel after an “appalling” commentary stint, even as Botham carried on as though nothing was wrong.

Gower spent a majority of his playing career alongside Botham and has since teamed with him in commentary boxes as well. The long association has resulted in a fair few interesting stories, one of which Gower narrated in the podcast, saying Botham, who has his own wine range, is “entirely suited to his latest career of peddling alcohol in large quantities.”

Gower was amazed at Botham’s ability to “appear with absolutely no visible signs of pain or anything else” after long night outs. “There was a tour of South Africa, some years ago now, where we got to the ODIs,” said Gower. “There was one in Johannesburg, and the following day, one in Pretoria, Centurion. I remember it horribly.

“Saturday night in Johannesburg, and I sort of rang Beefy up and, ‘Doing anything? Grab a glass of something, something to eat … early start tomorrow, so just quiet night?’ Met him in the bar, and there were all sorts of people, like Mike Procter, and it was one of those nights where people just kept wandering in, ‘Oh I’ll have a drink’.

“And then the bar closed. You hadn’t eaten more than half a packet of peanuts. And we sort of went upstairs, ‘Oh let’s have another drink to finish of with’. Somehow the night disappeared. Beefy then drove us from Sandton in Johannesburg up to Centurion, 40 minutes without batting an eyelid. I felt dreadful. 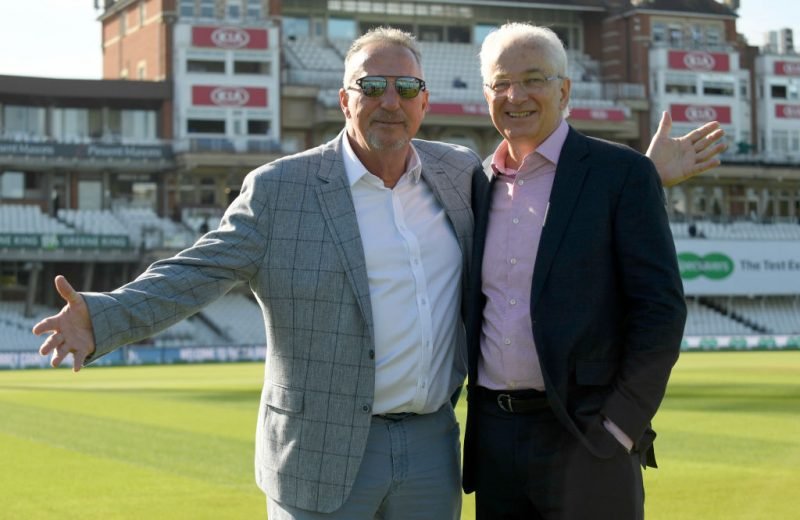 Gower and Botham have had a long association, going back to their playing careers

“I wandered in, and was told I was going to do a pitch report. You stick your earpiece in, get your battery pack on … Centurion has about 75 steps, each of which felt like a metre high. Eventually got down to the field, staggered across the pitch, and in my ear someone said, ‘Go for it, mate’. So I was … ‘Welcome to, err, where are we? Centurion, yeah. Let’s have a look at this pitch then.’ I managed to get down to my haunches, and said, ‘You know, it looks pretty good to me. Back to you’.

“Then I sort of staggered up the steps again, up to the level where the commentary box is. My first commentary stint was an appalling effort, and eventually, someone said, ‘I think David needs to go home’. So I was sent back to the hotel. But Beefy and Procty, no one would have known anything was wrong. They did the day’s work, carried on, usual stuff. Came back that night, [asked me], ‘How are you?’. [I said], ‘Pretty bloody awful, thank you’.”