“Our champion against your champion” has been a familiar dare since the Philistine kings challenged Saul. Throughout the 1930s and for much of what cricket was possible in the Forties, the rivalry between England and Australia invariably polarised into a contest between Walter Hammond and Donald Bradman. From the moment Hammond stepped onto a cricket field, said Len Hutton, “he looked the master”; but as was usually the case with any competition involving The Don, there was only one winner.

In any other era, Hammond would have been king of the castle. During his early career he was “peerless”, according to Raymond Robertson-Glasgow. However, the success of a young Australian interloper in the 1930 tour party to England was the first indication that Hammond would be seeing more silver than gold in battles with Bradman.

While the Englishman returned a respectable enough 306-run aggregate at 34, Bradman – five years younger and in unfamiliar conditions – made 974 at almost 140. Hammond’s 113 at Leeds looked rather trifling in response to Bradman’s 334. The irritation was further compounded as Bradman’s record series aggregate – still unsurpassed – consigned Hammond’s 905 in the 1928/29 Ashes to second place. No sooner had Hammond become the best, suggests David Frith, than he was usurped.

The apparent blunting of Bradman during the 1932/33 Bodyline series offered Hammond the chance to retake the initiative. He scored well enough, making 440 runs at 55 and chipping in with nine wickets, but Bradman still managed 396 runs at a superior average in what was one of his quieter series. He took a wicket too, bowling an England batsman well set on 85 with a filthy full toss. It was Hammond of course; around every corner, there was The Don to scupper him.

It was hardly surprising then, that when he beat Bradman’s 334 in New Zealand a couple of months later, he was demonstratively pleased with himself. A few years later in the Adelaide Test of 1937 Hammond got his own back for that wicket too, snaring his nemesis with a nifty caught and bowled. The Don, though, was on 212 at the time – revenge, it seems, had its price. 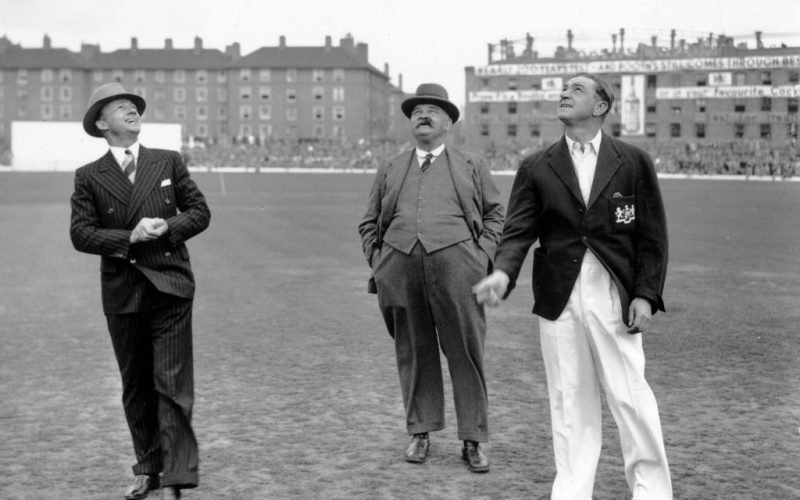 Bradman and Hammond at the toss before the 1938 Oval Test

A reasonably low-level rivalry gained a sharper edge during the 1938 series in England. Simon Briggs suggests that Hammond gave up his professional status – and the match fees accompanying it – in order to meet Bradman on equal terms as his country’s captain. It was a tough call, writes Briggs, “for a man as financially driven as Hammond”.

By the fifth Test, the urn had been lost but England were seeking a face-saving win to square the series. They took three days over 903-7 declared, Hammond only calling a close to the plunder when it became clear that Bradman’s ankle injury would prevent him from batting. The Don never forgot the humiliation of losing a Test by an innings and 579 runs – bad news for England and Hammond when cricket resumed with the optimistically named ‘Goodwill Tour’ of 1946/47. 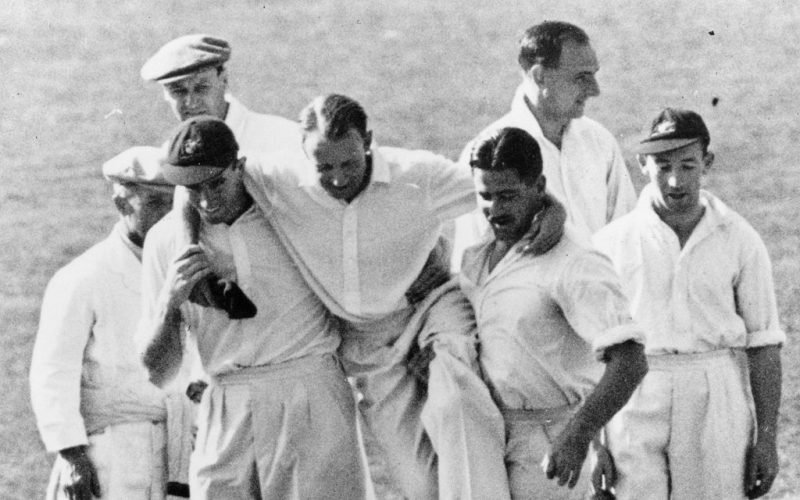 During the war Hammond held a largely administrative role in the RAF and, despite his lack of combat, saw the tour as welcome respite. Hammond promised his team “the happiest six months of your life”. The best laid plans and all that…

For Bradman, though, memories of Bodyline and the Oval shellacking still stung. Malcolm Knox suggests Bradman’s war had consisted of “selling stocks, playing golf and getting himself into committees” and that a six-year break was merely “a blip in his long campaign for payback”. In the first innings of the first Test, he edged to slip at 28 but stayed put. Even watching Aussies thought it was out, but the umpires gave Bradman the benefit. He went on to make 187, leading his team to victory by an innings and 332 runs. Goodwill was in short supply when Hammond told his rival it was “a fine f***ing way to start a Test series”. Thereafter their relationship deteriorated with conversation confined to the toss. Keith Miller described the whole series as “not so much a battle between England and Australia as a battle between Bradman and Hammond”.

Australia completed a comfortable series win, all but ending Hammond’s career. Homesick, out of shape and his enthusiasm for cricket long since evaporated, he became even more aloof than usual, often travelling separately from his team in what Denis Compton called “the worst example of mismanagement” he ever saw. On one of the few occasions Hammond had a travelling companion, his entire conversation with Len Hutton during a 700-mile car journey amounted to: “Look for a garage – we need some petrol.”

As always, Bradman had the last laugh. With enough magic left to lead the Invincibles in 1948, a famous duck at The Oval was the only glitch in a hugely successful tour. Aged 40, he amassed 2,428 runs including 11 centuries and topped the triumph with an excursion to Balmoral for King George VI to size him up for a knighthood. It was ‘Sir Donald’ shortly afterwards, in contrast to plain Walter Hammond. With Hammond, according to David Foot, “increasingly drawn to the outward trappings of middle-class country living”, his bête noire had trumped him yet again.

Hammond’s irascibility was not helped by a disastrous one-off comeback in 1951. Almost unable to hit the ball off the square, he scraped seven singles in 50 minutes. Despite what Foot describes as an almost fatal and permanently mood-changing encounter with syphilis in his mid-twenties, Hammond is described by Simon Briggs as “the Hugh Hefner of interwar cricket”; his perfect combination consisting of “a hatful of runs and an eyeful of totty”. Both were more plentiful than money. When Hammond died in South Africa in 1965, his wife was so financially stretched she sold his cricketing memorabilia. Hammond’s daughter reflected that there were no tangible artefacts remaining to remind his grandson that Wally was one of the greatest to have ever strapped on a pair of pads.

Chappell picked out two examples of great cricketers whose careers, in his opinion, were adversely affected by Bradman’s perceived ability to hold a grudge.https://t.co/1GLEBlhDmZ

If off-field success is to be measured by wealth, stability and influence then Bradman has the upper hand once again. A fruitful business career was pursued in parallel with a happy 65-year marriage and even in retirement he retained his grip on cricket; “his tentacles”, suggests Sharm de Alwis, “crippling it, issue by issue”. With a reputation for parsimony, his intransigence is thought to have helped drive international cricket into the welcoming arms of Kerry Packer. He was not universally loved, especially by old teammates Jack Fingleton and Tiger O’Reilly, but his legend endures. While Hammond ended his days faraway and forlorn, Bradman lived 30 years longer and was honoured, adorned and mostly adored.

Hammond’s record is staggering but next to Bradman he was almost always a day late and a pound short. When Wisden chose its greatest five cricketers of the 20th Century, Hammond polled 18 votes out of a hundred but everyone who voted selected Bradman.

If judgments are made in terms of aesthetics then Hammond’s batting was generally considered more stylish than Bradman’s “remorseless accumulation”, says Mark Baldwin. Len Hutton – who knew a thing or two about batting – said he preferred watching an hour of Walter Hammond “to eight or 10 hours of Don Bradman”, but The Don wouldn’t have cared. Alan Gibson says that Hammond “gave to cricket, and cricket gave back to him”, except the things “he wanted most” – the elusive tag of the world’s greatest batsman being chief among them.