Jon Hotten looks back on the scorched summer of 1977 and the return of Geoffrey Boycott, a mysterious, distant figure who had a point to prove and a landmark in his sights.

This is a story about 1977, but it begins the summer before, on August 13, 1976 at the Oval. It was England v West Indies, fifth Test, second morning: my first day of Test cricket. It was also the summer of a famous drought. The ground seemed vast and brown, blistered and burned by endless sun.

I’d watched the first day’s play on TV, and West Indies’ new star batsman Viv Richards made exactly 200 not out. He went on to get 291. Viv swaggered off slowly, apparently unbothered by his proximity to a triple hundred. Towards the end of the West Indies innings, the group of blokes behind us began to talk about England’s opening batsmen and what was going to happen to them. They were sharing a pair of binoculars and arguing over who’d get them. “I want the first ball of Amiss,” one said.

I sort of knew what they meant. Clive Lloyd had built a new kind of war machine made of brutal fast bowlers and England were being smashed into submission. Edrich and Brearley had opened in the first Test, Wood and Brearley in the second, Edrich and Close in the third, Woolmer and Steele in the fourth and now it was to be Amiss and Woolmer in the fifth. They survived for the night, but Holding and Roberts were bowling so quickly the ball, from 90 yards away, was almost invisible.

One name was absent from that list, the name of my dad’s favourite player: Geoffrey Boycott. I knew that he was in some kind of exile but I didn’t know why. He was a remote figure, written about in the papers, talked about on television. One of the few sportsmen, like Muhammad Ali or Brian Clough, who could reach beyond the back pages. Everyone knew Boycott. People loved him, people hated him, but it was quite hard to actually see him play because the only cricket on television was the Test matches or the John Player Sunday League. He seemed distant and mysterious.

All I had was Geoff Boycott’s Book For Young Cricketers, in which he outlined his techniques and practice drills, and my dad in my ear, telling me to try and emulate the great man’s immaculate defence.

What I didn’t understand were the roots of Boycott’s exile, the complex mix of external events and internal forces that kept him away for three years. He was 34 years old when he stopped and approaching 37 when he came back.

It was an Ashes summer. Tony Greig had left the England captaincy to join Kerry Packer’s World Series Cricket, with Mike  Brearley taking his place. Boycott had been the first player to turn Kerry Packer down. On May 14, he met Alec Bedser, the head of selectors, at Watford Gap services. Boycott was worried about being seen by photographers so his return was negotiated in Bedser’s white Austin Princess. Bedser left him with the words, “The ball’s in your court”.

The squad for the first Test had already been picked. That game finished in a draw. Australia played three first-class matches before the second, the last of those against Yorkshire at Scarborough, where Boycott went for nought in the first innings and then made 103 in the second. England won at Old Trafford, but the failure of Dennis Amiss cleared the way. Boycott was back.

When the squad for Trent Bridge was announced, Boycott was joined by another, much newer star of the English game, Derek Randall, who had made 174 in the Centenary Test at the MCG during the winter. Randall had a manic, nervous energy at the crease. He was constantly in motion, pulling at his gear, twitching, gurning, talking to himself.

He was probably the best fielder in the world too, running in almost as far as the bowler from his position at cover. And there was a debut for Somerset’s Ian Botham, who bowled an astonishing spell on the first day: 4-13 at one point.

But it was Boycott I was waiting to see, and he made sure no one missed him. He batted on all five days of the match, and the redemptive arc of his summer began. At 11, I could have had no idea what it would have meant to him.

Early on the second morning, he ran Randall out and buried his face in his batting gloves. He was dropped on 20 by Rick McCosker. He could have folded but his determination was absolute. By the end of the day he had 88.

“There were people there willing me to get out, the hatred ran very deep,” he said in 1987. “Then to run the local hero out. It would have been the easiest thing in the world to give a slip catch and get off the stage… That was by far my best innings.”

“There were people there willing me to get out, the hatred ran very deep”

He made 107, his 98th first-class hundred, and 80 not out in the second innings, and then went to Edgbaston with Yorkshire the following week and got a hundred there. Ninety-nine centuries, and his next knock at Headingley against Australia in a Test match.

As a kid to whom the world had always been kind, I had no doubt he would do it. I couldn’t wait for it to happen. Now, I marvel at the unlikeliness of it all: of life bending itself into the shape of happy-ever-after fiction – and how rarely that happens.

It was like Boycott and the whole of Yorkshire willed it true. He barely slept the night before the game. At three in the morning he ordered tea from the night porter at the hotel. Brearley won the toss and batted. The crowd roared and shivered. Brearley got out third ball. Boycott made 34 in the first session, and another 35 between lunch and tea. He was like a man walking along a high wire, never looking down. My dad was driving home from work early, hoping to see him do it. Geoffrey scored 10 in the first hour after tea. Australia thought they had him caught down the leg-side. My dad got home and we went next door, because our neighbour had come home early to watch it too and he had a bigger TV.

The time was ticking away towards the six o’clock news. Boycott inched through the Nineties. By 5.49pm, he was on 96 and facing Greg Chappell. Chappell bowled a floaty, inswinging half-volley and Boycott pumped it down the ground. He tried to raise his hands in the air but they dropped behind his back, the bat dangling from them. People raced onto the ground. Someone stole his cap. He was surrounded but alone. 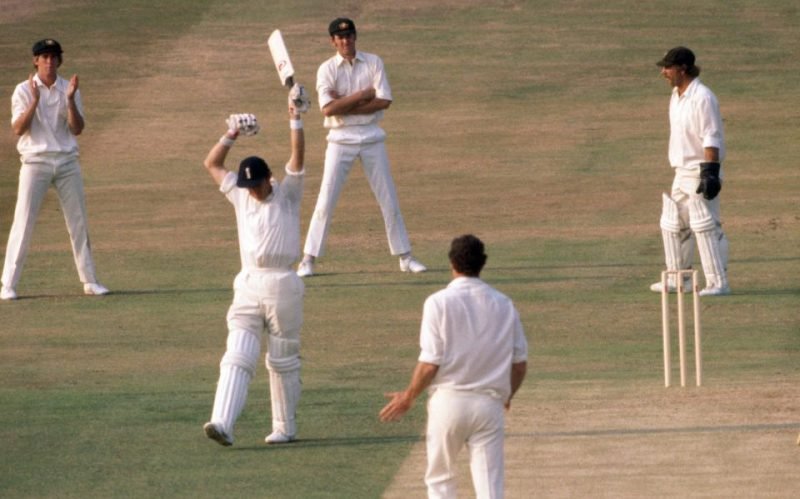 Boycott celebrates after getting to his 100th first-class hundred

Standing around the TV, we all cheered. The innings was on the news and in all the papers. It was a water cooler moment long before anyone knew what a water cooler was. The next day he went on to 191 and England won by an innings. Since his comeback, Geoffrey Boycott had batted for 22-and-a-half hours, and I’d watched all of them.

As a kid, you think that this is sport – a thing that exists to fulfill these kinds of storylines. Boycott’s feat will never be repeated now. Even the thought of it seems dreamlike, too good to be true.

When you’re 11, you can believe in stuff like that.