With the frame and bounce to frighten anyone, Chris Tremlett was unplayable on his day. In 2015 the former England quick looked back on his career with Henry Cowen.

At two or three years old, I was putting my dad’s pads and gloves on and playing cricket. I used to play in the corridors and in the garden at home. I’d be at the old Northlands Road ground, half watching my dad but really looking forward to playing on the outfield at tea. Cricket was always something that I wanted to do, I wanted to follow in my father and grandfather’s footsteps. At the age of 18, I discovered girls and alcohol and I did wonder whether I wanted to sacrifice these things to just play cricket. Having weighed up my options, and particularly after my growth spurt at 17 when I realised how good I could be, I decided to concentrate on cricket.

I always saw the game in a simple way; I just tried to bowl my best ball every ball and bang a length. In my first game, that’s all I tried to do and I ended up getting 4-16 against the New Zealanders, taking a wicket – Mark Richardson – with my first ball. He was caught at short-leg by John Stephenson. It was a nice bouncy pitch to start my career on. I surprised myself with how well I did, I thought that if I worked hard, I could do this.

Having Shane Warne at the club was a massive advantage. I was always a quiet character who didn’t show much emotion, but deep down I really cared and listened. Warne was quite an aggressive captain, which I enjoyed. Having Shane Warne give you a rocket up the backside was in some ways quite exciting, but at the same time very daunting. It made me realise what playing cricket at the top level would be about. He took me out of my shy comfort zone and tried to turn me into this aggressive monster, which I never really was, but it made me more aggressive and gave me more stature. I thank him for that. I went into that season fully fit, got lots of wickets early on and I began to be talked about as a potential England player.

During that 2005 season, which was obviously a huge one for English cricket, the one-day series came up against Bangladesh and Australia. Just before that got underway Hampshire had a practice game against England, in which I took a couple of wickets. Unfortunately, England absolutely hammered us so we had a 12-over beer match after the proper fixture in order to give them some practice. I smashed a quick 30 with the bat and Duncan Fletcher seemed to be impressed with my skills, both batting and bowling. I got called into the ODI squad off the back of that and then, on my international debut, I took two wickets in two balls against Bangladesh – I almost took a hat-trick but the bail didn’t budge despite the ball rolling onto the stumps.

This was particularly special as it was my first trophy. We chased down 358 against Surrey at the Oval in the quarter-final, when nobody had given us a chance. We had a very good team including Shane Watson, Dimi [Mascarenhas] and Sean Ervine. It was a fantastic ride, Lord’s is always a great day out and it was memorable. Dad’s still working at Hampshire. I’d played for Hants from the age of 11, so to go from there to a Lord’s final was amazing. To win with your friends is always pretty special.

I was involved with England a lot and I always felt I was the next man in but I had to be patient, it was a tough team to get into. I didn’t make the full squad, but Matthew Hoggard picked up a calf injury and I came in. I’d tried something new that year, on the advice of Stuart Clark, and I was bowling with a shorter run. I had a bit more snap and I was bowling quicker than Stuart Broad – who I was competing against – and looking a bit more threatening. In the nets I was getting the ball to fly up, and no one else was really doing that. I’m sure I got chosen because of that, because the Indians didn’t like the bounce. I had a good match, dismissed Dravid and Laxman, but rain ruined the game. I then took six at Trent Bridge and 13 in the series but didn’t get picked for the Sri Lanka tour. I was pissed off but could understand why I hadn’t been picked. I knew my opportunity wouldn’t be too far around the corner.

I don’t know if there is a cricketer who has had as many different injuries as I have; it’s beyond belief, really. It has tested my patience throughout my career. A big strength of mine has been finding a way to mentally deal with injuries and setbacks. That’s sort of just my laidback nature, although it was killing me at times, especially when I would get really close to playing for England and I would get another injury. It’s not nice to have that tag of being ‘injury-prone’ and I worked as hard as I could in the gym to give myself the best chance. People say I should have played more times for England but I gave it 100 per cent, even after the 2010/11 series. I only played one more Test after that and while l came in and did the job I was told to do in that match, it wasn’t really about the stats but the achievement of coming back from injury.

The move to Surrey

In 2009, I was at Hampshire and felt a bit stale. I needed to change something and to shake off the perception that I didn’t care. I wanted to do something which proved to the selectors that I was driven to play for England. I’m not sure I always showed that I wanted to do it enough. Surrey came along, it worked and I began to take wickets for fun. I also wasn’t on painkillers for the first time in my career. It was great to be able to trust my body and to bowl with freedom. I knew I would be in with a shout of making England’s 2010/11 squad for Australia having netted with KP and David Saker. As soon as the phone rang I knew I was in.

There’s no doubt that this tour is what I will be remembered for. It was the happiest time of my career. I didn’t think I would play but Stuart Broad got injured at Adelaide, so I came in at Perth and it couldn’t have been a better place with my height. I bowled as well as I could have done, took eight wickets and got a five-for. We lost the match but it’s good to have the memory of taking five. Then I contributed at Melbourne and Sydney, I set the tone by getting Watson and Ponting out at the MCG on Boxing Day and I ended up taking the final wicket of Michael Beer at Sydney. I don’t really ever watch these moments back, but when they come on the TV I always think that they’re pretty amazing. It’s a bit weird thinking that that’s me celebrating on the screen! 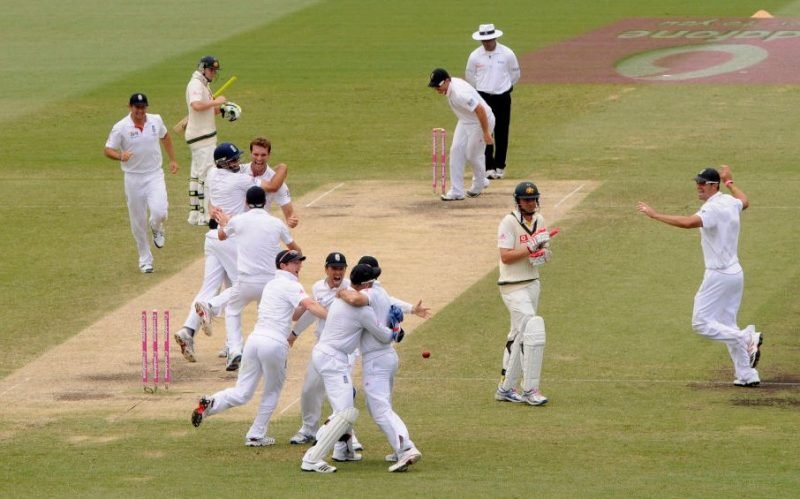 Chris Tremlett and his teammates celebrate after the final Aussie wicket at the SCG. England took the series 3-1

Off the back of the Ashes win down under, I won Man of the Series against Sri Lanka at home and I felt I was bowling as well as I could. It was the first time in a long time that I didn’t have an injury, which was the biggest difference. I just remember it feeling really easy. Unfortunately in the first match of the India series, after the Sri Lanka series, I felt something go in my back and I ended up needing an operation after it flared up again during the first Test in the UAE. As I came back from that I then needed a knee operation and I was never the same again. I trained harder than I ever had, I felt fit and strong, but my body just wouldn’t allow me to bowl at the pace that I could before.