First published in Issue 5 of Pinch Hitter, Kit Harris looks back at an interesting and well-known mix – the best and worst gestures on a cricket field.

Back in the day, when a match wasn’t guaranteed to have television cameras, let alone DRS, a batsman scratched his guard and took his chance. In the Jubilee Test of 1980, England keeper Bob Taylor was dejected to be given out caught behind – he knew he hadn’t hit it – and to find that the umpire and fielders were of like mind. All except one: Viswanath, in his second match as India captain. Something about Taylor’s demeanour gnawed at him, so after consulting with his teammates and Taylor, he withdrew the appeal. Nobody really understood why, and Viswanath never captained India again. 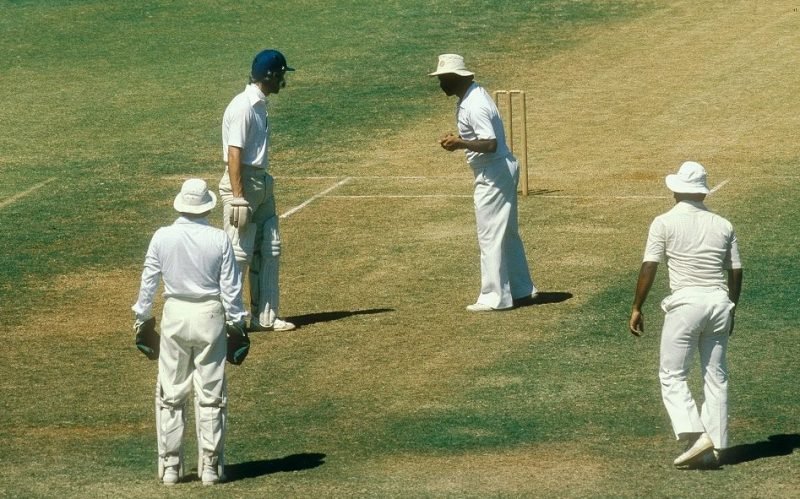 Viswanath withdrew his appeal after consulting with Taylor

There can be no gesture more sporting than one made with the match on a knife-edge. In an ODI series decider, Pakistan scored 150 and India were 66-3. Kris Srikkanth, playing a captain’s innings, played across the line against Waqar Younis and was adjudged lbw. Incensed, he gestured wildly and yelled that he’d hit it. His opposite number, Imran Khan, was now 37 years old and his diplomatic traits were blossoming. He’d heard bat on ball and, being moved by Srikkanth’s plight, invited him to continue his innings. This he gratefully did, snicking the next ball to the keeper.

Sir Viv marched to the beat of his own drum. In this ODI, Pakistan had fallen to 94-7, but Javed Miandad was still there and had put on a dozen with Tausif Ahmed. Trying to farm the strike, Miandad pushed a ball from Richards towards long-on, but it struck Tausif and deflected to the bowler. Both batsmen were stranded and Tausif turned back, but his self-sacrifice was surpassed by the pride of Richards, who picked up the ball, turned away and ambled back to his mark. His team wasn’t going to take wickets like that.

The first guard of honour: Nasser Hussain (The Oval, 2000)

“I was pleased because it showed that they respected me”

A tally of 164 wickets in 34 matches at an average of 18.79: few bowlers have dominated England like Curtly Ambrose. The pain he inflicted, particularly at Bridgetown in 1990 and at Trinidad in 1994, left permanent scars for his victims and indelible memories for the witnesses. In his final Test, the Englishmen might have breathed a silent sigh of relief at parting ways, but Hussain marshalled his men to applaud Ambrose all the way to the middle. The guard of honour was born. “I was pleased because it showed that they respected me,” reflected Ambrose, as if the previous dozen years hadn’t provided evidence enough.

Long before ‘elite honesty’, there were gnarled, snarling Aussies. The mental disintegrators. The men who only walked when their car broke down. Alone among them stood Adam Gilchrist, a man of such piety that he berated opponents for following his team’s example. When it mattered most, in the World Cup semi-final, he swept at Aravinda de Silva; ball flirted with pad, thigh, arm and glove. The Sri Lankans were sure about the glove part, but umpire Rudi Koertzen wasn’t. Gilchrist walked, his honesty applauded by the world, or most of it. The Australians still think he was nuts.

Occasionally captains decide – under varying degrees of duress – to recall a batsman who’d been legally run out believing the ball was dead (Vettori in 2009, Dhoni in 2011). None did so more sheepishly than Mike Denness in this Trinidad Test. At close of play, Alan Knott was pulling up the stumps, Derek Underwood collecting his sweater, but Tony Greig took the opportunity to run out Alvin Kallicharran as he left the non-striker’s wicket, because the umpire hadn’t called time yet. “Kallicharran smashed his bat on the pavilion steps and started crying!” joked Greig in 2012 – at the MCC Spirit of Cricket lecture.

Umpiring occasionally plumbs the lows, but rarely descends to blows. The decisions were poor in the first Test, where Michael Holding famously kicked a stump out of the ground. In the second, umpire Fred Goodall made another error, and Colin Croft turned the air blue. Goodall asked the captain, Clive Lloyd, to intervene, but the reply was curt: “If you have a problem with him, tell him yourself.” Croft now had free rein, and after bowling a massive no-ball he flicked off the bails, then barged into Goodall during his run-up. Croft still maintains it was an accident; a repentant Lloyd later became an ICC match referee.

Stand back and say nothing: Justin Langer (Colombo, 2004)

Colombo in March. Sri Lanka bat all day. Even on film, you can almost hear the heat. As the Aussies toiled, trying to conjure a wicket, Adam Gilchrist noticed a fallen bail and asked the umpire what had happened. Shane Warne chipped in: “Nobody was here, and I just saw the bail on the ground.” Perhaps Hashan Tillakaratne had hit his wicket? After several minutes, a replay showed Justin Langer walking to the wicket, dislodging a bail, and walking away. Langer said he was “disappointed” in those who suspected sharp practice, and later became the pioneer of that ‘elite honesty’. You can make your own minds up.

A long limp back to the pavilion: Paul Collingwood (The Oval, 2008)

Most captains can, albeit reluctantly, be persuaded to reprieve a batsman who was run out after colliding with a fielder (Cowdrey in 1964, Cronje in 1996, Waugh in 1999), but Paul Collingwood forewent that discretion at the climax of a thriller in London. With New Zealand needing 26 from 39 balls, Grant Elliott collided with Ryan Sidebottom and hit the deck, leaving him helpless to escape an ignominious dismissal. As a chorus of booing erupted, Sidebottom helped the Kiwi to his feet and the umpires asked England’s ODI captain if he might like to reconsider his appeal. “No,” came the reply

Sehwag swung, cleared the boundary and celebrated, but though the no-ball counted, the six didn’t.

It was all over bar the sideshow. Sri Lanka, having posted a meagre 170, could only watch as Virender Sehwag plundered his way towards his 13th ODI century. With five needed to win, he was one short, and broke into a broad smile as the ball went for four byes. That added a little spice. Randiv bowled two dot balls. “What happens if Randiv bowls a no-ball now? Sehwag would be stranded on 99!” laughed the commentator. The same idea struck Randiv, who decided to overstep deliberately. Sehwag swung, cleared the boundary and celebrated, but though the no-ball counted, the six didn’t.

The Citizen Kane of gamesmanship. The Bohemian Rhapsody of bad behaviour. The Pelé of cricketing villainy. It’s so obvious, but you can’t leave it out. All we can say about the highlights is ‘watch till the end’. If there’s anything even more wondrous than the audacity of the move itself – and remember, like all the examples in our list, it was completely within the Laws – it’s Richie Benaud’s sublime outrage at the conclusion of the Channel 9 coverage. He still manages his customary “goodnight” to those at home, but it’s no more than the aftertaste of a bitter tirade.