Henry Cowen pops in his headphones and listens to the best (and worst) cricket songs.

A heartfelt song praising the great Sir Vivian Richards. It featured on Stevan Riley’s excellent film Fire In Babylon and Lord Short Shirt is our protagonist, extolling the virtues of Sir Viv with such love that it makes you pine for the days of a kick-ass West Indies Test side. He even gets ‘Chandrasekhar’ into the lyrics – hats off to that.

For fans of cricket this is, and always will be, Channel 4’s cricket theme. The lyrics aren’t important – unless your name’s Erica – because, for years, just before the camera fixed on a windswept Mark Nicholas, we were treated to the instrumental version of this baby. It’s still so crickety and remains strongly redolent of Tres and co. The two blasts of the trumpet at the end are as evocative as many images: a reminder of the power of terrestrial TV.

Cut an Aussie of a certain age and he’ll bleed this song. Used initially as a 60-second advert for World Series Cricket, this song has become an Australian cricket staple. It even topped the charts for two weeks. The second version – ahead of the 1983/84 World Series – lacks the charm of the original, not least because it uses some terms which must have been questionable even then. Shannon Noll did a version in 2004 (admittedly for charity) that makes you wish you’d never heard of cricket. Or Australia. Or music.

The theme tune to Test Match Special and it’s another that’s come to be owned by the sport. It’s rare to hear it in a non-cricket context, like 10 CC’s ubiquitous Dreadlock Holiday (cricket law states someone must be using it for marketing purposes at any one time) and Sherbet’s Howzat, which must be a song that brings T20 batsmen out in some kind of post-Pavlovian sweat.

Oh I was walking round my local store/ Searching for the 10 pence off Lenor/ When suddenly I bumped into this guy/ On seeing who it was I gave a cry/ ‘F***ing ‘ell, it’s Fred Titmus!’

Unabashed brilliance. Created just because Half Man Half Biscuit thought it would be hilarious to have people shouting back to them a name as obscure as Fred Titmus’ – and they’re not wrong. That the former England and Middlesex off-spinner is remembered in this way is glorious.

As Alex Bowden recalled in these pages, this song “was so lamentable that the royalties came to just £53.86 – which then had to be split 17 ways”. Cricket’s never held a flame to football for the awful brilliance of official team songs but this one gives it a go. Recorded off the back of England’s Ashes success this one’s worth it for the photo of the team. Pictured in the recording studio, mid sing-along, they’re all having a jolly good time. Except Bob Willis. 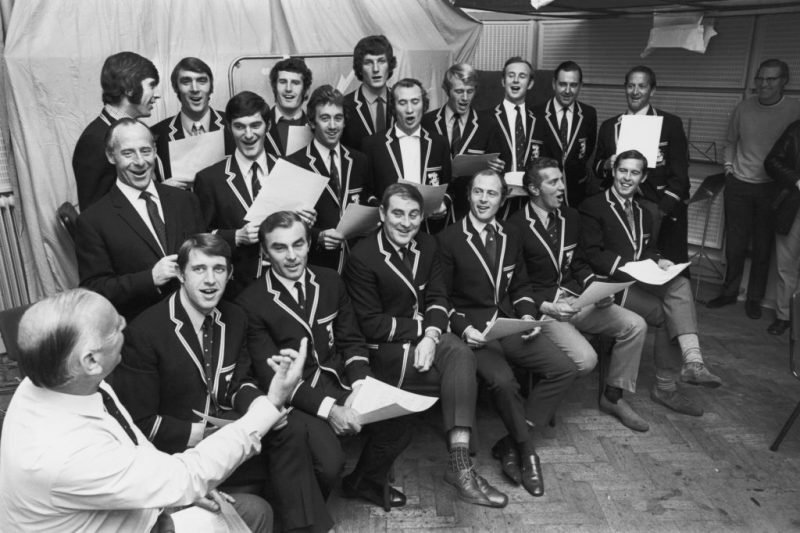 The England side in full flow

Grade-A tat, this one. It’s Brett Lee and his attempt at cracking Bollywood. The lyrics apparently took him 30 minutes, which begs the question how he filled the 28 minutes he must have had free after phoning this in. He’s not the only cricketer to dip his toe into singing. AB de Villiers is human, after all, because his pop songs are better ignored and then there’s Shane Watson, who teamed up for a duet with Danielle de Villiers – wife of AB – the results of which are uncomfortably earnest. Also Dwayne Bravo’s a champion, which he’s too modest to mention. No Diamond Lights, none of ‘em.

Four minutes before the shipping forecast and just as Billy, the Barmy trumpeter, was playing a poignant last post for Australian cricket. It’s 2011 and England have just won the Ashes in Australia – for the first time since 1986/87. Mike Selvey, the Guardian’s main man, files some particularly special copy. Special partly because it’s really very nice, partly because it commemorates a beautiful moment and partly because Mike Skinner, he of The Streets fame, decided to sample it in a spoken-word track. Worth a look.

He hit ‘em hard/ He hit ‘em straight/ He was more than just a batsman, he was something like a tide/ More than just one man, he could take on any side

This song couldn’t have been written in England. And if it had been, they wouldn’t have been able to find anyone to sing it. It’s nice that The Don was amazing at cricket, it really is, and it’s nice that Paul Kelly was moved to write a song about it, but was Bradman really like a tide? Or does tide just rhyme with side?

A truly beautiful song. Arguably the strength of this lies in the fact that while it’s about cricket, it’s also about so much more than cricket. It is just a game, after all, and one day we’ll all have to stop playing – something that Harper encapsulates beautifully. The lyrics are perfection – although it’s a very unlucky 12th man who gets put at silly mid-off – and it’s genuinely moving.