Damien Martyn, the West Australian middle-order style guru reminisces the matches that made him in an exclusive chat with Phil Walker.

It was against Victoria, with Merv Hughes and Dean Jones and all that. Merv was playing for Australia at the time. He gave it out a lot; sledging was just part of it. All the young kids got a bit of chat, but it was one of those environments. At the end of the day we were playing men and you just had to stick your chest out and take it otherwise you’re gonna get walked over. It was just the way we were all brought up.

Open Account Offer – Up to ₹4000 in Bet Credits for new customers at bet365. Min deposit ₹400. Bet Credits available for use upon settlement of bets to value of 12 times qualifying deposit. Min odds, bet and payment method exclusions apply. Returns exclude Bet Credits stake. Time limits and T&Cs apply. The bonus code WISDEN can be used during registration, but does not change the offer amount in any way.

We were playing against a Queensland side at Brisbane that had an attack featuring Craig McDermott, Dirk Tazelaar, Michael Kasprowicz and Andy Bichel. My two hundreds in this game really put me on the map. The year before I had made a couple of hundreds but this made me stand out. All of the kids who come through the U19 system have their careers planned out, so a lot of us were already in Shield cricket. It was about making your mark from then on.

It’s a whole different level. There was a lot of hype surrounding the series. There was a push to try and get someone young into the Australian team. As a result, there was extra pressure, especially when Dean Jones was left out for me. He had some issues going on and there was a lot of backroom stuff going on at that time. I’d grown up watching the West Indies and they were just different. I got 67 at the MCG, which is where Warnie got his 7-fer. That was my first taste of making runs at that level and batting for a while.

My first Test at my home ground was a strange match – Curtly Ambrose took 7-1 and Allan Border got a pair! I was happy just to make 31 in the second innings – it felt like 200 at that stage.  It was actually fun because I was a youngster. I’m not sure how the older guys felt about facing Ambrose, Bishop and Patterson.

Snuffed out by the Proteas

I was never going to play the next Test as I only came in to replace Steve Waugh. I made a fifty in our first innings and then batted seven in the second. Everyone collapsed and I was there, the young kid, just trying to hang in. McDermott came in and started swinging and we got closer. Then he got caught at cover and soon it was all over. I had six world-class batsmen above me and yet there was still a lot of pressure on me to save the match. We should never have lost it.

We were all fighting each other and waiting for an injury to pop up to grab a spot. Myself, Stuart Law, Jamie Siddons, Matthew Elliot and others just had to keep working in Shield cricket as the Australia team didn’t change much. WA got to a few Shield finals in that period, winning a couple, losing a couple. It was either us or Queensland at the time. Law was captain for them and Hayden was coming through. We had Langer, myself, Gilchrist – Tom Moody was captain. It was really enjoyable, first-class cricket. In the 1996/97 season we lost to Queensland at home but we got payback two years later when we played them in Brisbane and won. I got 85 in our only innings and took the wicket of Hayden in the second dig.

This is when I got in full-time. The first hundred’s always an important one. I actually didn’t feel much pressure because I’d been around the side for a while and travelled with them. I’d made runs in the lead-up games and then just got the spot. It was business as usual, really. I’d been given an opportunity to bat for the series. The Ashes has always been a big thing; I was on the tour in ’93 but it was great to be a playing member. Then I got a second hundred in the fourth Test at Headingley.

I made three centuries in quick succession against South Africa, but the one at Johannesburg stands out. They were all at some great grounds – Adelaide is so beautiful and Sydney was special for me because I never made that many there in State cricket, but The Wanderers is right up there because it’s an iconic stadium and a tough wicket. Important runs, especially after what happened against them in ’94.

We hadn’t played great cricket early on but got through thanks to some exceptional individual performances. We batted first and there was a big storm around and rain went on to hold up the game in their innings. Hayden set the tone early by walking at Zaheer Khan and puffing his chest out. It was hard early on when I came to the wicket and Ricky [Ponting] was going along slowly. I got to fifty first. The next thing I know, he took off and I was almost just batting with him. We set a target of 359, and they never got near it. It was special. 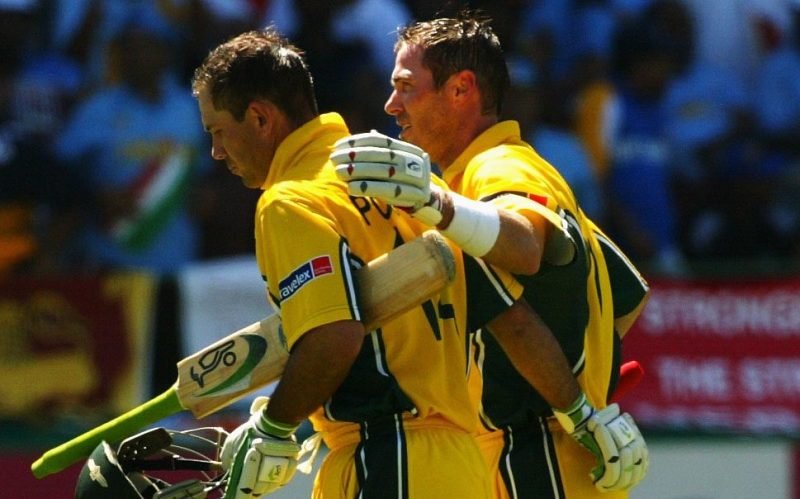 I think this series was probably my best in my career. To me, the subcontinent were the hardest conditions to bat in. I watched the 2001 series in India where we lost and thought, “Shit, I’m lucky I’m not playing!” You had to get used to the crowd and the conditions so it was nice to make serious runs against Harbhajan Singh and Anil Kumble, in India – I felt like I had ticked a box. We had to bat our arses off for long periods. At Nagpur there was a lot of pressure on us; we were 1-0 up with two to play and we knew we had to win here to win the series as Mumbai was going to be a real turner. I got runs in both innings – would’ve loved three more in the second! – but I felt like I was repaying the faith of Steve Waugh and the selectors for sticking with me at the beginning.