Celebrated cricket writer Stephen Chalke looks back on a summer of Garry Sobers, Sussex and working in a hospital.

The West Indians were not supposed to tour again till 1971. But their visit in 1963 had been such a triumph that South Africa got pushed into sharing a summer with New Zealand, and back came the West Indians, only three years on from their last tour.

I was 15 years old in 1963, and the Lord’s Test that year caught my imagination as no other Test has ever done. There was a magnificence about the tall, muscular Wes Hall, coming in over after over on his long run, bowling into the evening till his last drop of energy was almost spent. There was a thrilling madness about the way the balding Brian Close came down the wicket to him and, thrashing away, almost won the game. And the drama of the last over, when Colin Cowdrey came out with his arm in plaster, it was like a ‘ Roy of the Rovers’ story from the Tiger comic.

Three years on, in the summer of 1966, I was between school and university, living out my confused Christianity by working in a hospital for the ‘severely subnormal’ near St Albans. I was away from home and lonely, with a room in the nurses’ quarters, and I looked forward to my Saturdays when I went down to London – to the theatre or to Lord’s.

I wanted to see my favourite players. When it was Sussex, that meant Ted Dexter, Jim Parks and the Nawab of Pataudi, all attractive stroke-makers. Sussex had won the toss and were batting – hooray! I settled down in the Grand Stand, and I watched in dismay as, within the space of an over, a medium-pace bowler called Hooker dismissed all three of them for ducks. I ended up at the Haymarket Theatre, watching Shaw’s You Never Can Tell. I retain no picture of Hooker, but I can still hear Ralph Richardson’s amused voice: “You never can tell, sir. You never can tell.”

Dexter played only three games that summer. Peter May had long retired, and Fred Trueman was past his best. English cricket was crying out for a new generation of entertainers, and it found one in the rotund figure of Colin Milburn, a swashbuckling batsman with an infectious grin. He was picked for the first Test at Old Trafford and, after being run out for nought in the first innings, he hit a joyous 94 that eased the pain of losing in three days. The only other batsman to make runs was Cowdrey, another who would not pass today’s bleep test. That was part of the charm of English cricket in those days; the players came in all shapes and sizes.

The West Indians were different. Unlike most English cricketers they seemed to play without inhibition, none more so than Garry Sobers. As summer went on, and he piled glory upon glory, he became my hero. Alas, I arrived too late to get into the Saturday of the Lord’s Test, when Tom Graveney – recalled once more – hit 96. So I persuaded my father to buy us a pair of advance tickets for The Oval.

I worked from Monday to Friday in Ward Six, a heavily locked villa which housed 40 children, most of whom were unable to speak, some bedridden. A bright, little lad called David had been given a cricket set by his parents, and I tried to set up games with him on the high-fenced back lawn. But it was not a great success; I was forever coaxing the rubber ball out of the mouths of other children.

It was a relief when the day was over; I could get back to my room and tune my transistor radio to the last hour of the Test. On the Monday at Lord’s, West Indies were five wickets down in their second innings and only nine runs ahead. Then Sobers and his cousin David Holford put on 274.

I had a week off in early August for my brother’s wedding. I was the best man, and all day I wanted to know the score from Headingley. We were losing again, after another Sobers century, but D’Oliveira was batting well. He was another of my heroes that summer, his life-story a triumph over the hateful apartheid. It was uplifting the way everybody in England warmed to him.

At The Oval, I sat with Dad in the East Stand, and it was not at all the day I had anticipated. Graveney and John Murray scored hundreds. Wes Hall and Charlie Griffith, so potent all summer, looked weary, and England’s last pair, John Snow and Ken Higgs, amid great cheers, broke all sorts of records with a stand of 128. So great had been the West Indian dominance all summer that Higgs was the only man left from the team for the first Test. By close West Indies had lost four second-innings wickets, and they were still 124 behind. 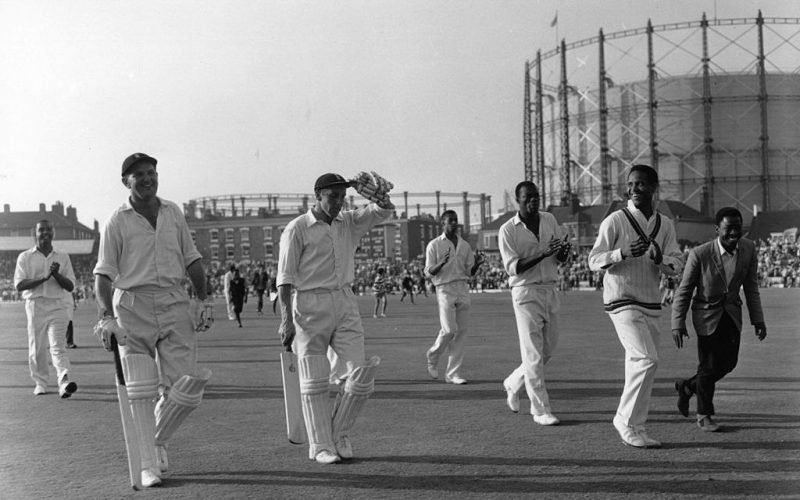 Sobers leads the applause as Tom Graveney and John Murray leave the field at The Oval, on their way to a 217-run partnership

Sobers had yet to bat, and I was desperate to see him. His average for the series was 120, and I was certain that once more he would save the game with a glorious century. And I so much wanted to be there when he did it. I went back to the hospital, worked on Sunday and returned to The Oval, together with a friend from school. Just before the 11.30 start we sat down on the terrace in front of the gasometers.

By 11.50 West Indies had lost three wickets, including Sobers first ball, hooking Snow and caught at short-leg by England’s new captain, the brilliantly mad Brian Close. West Indian supporters were still arriving, full of excitement; they all went quiet when they saw the scoreboard. Sobers, nought? It was not possible.

The game was over soon after lunch. We joined the crowd in front of the pavilion, then took the tube to Oxford Street, where we watched Olivier’s Hamlet in the Academy Cinema. It’s a very good film, but I would rather have seen Sobers score a century.

He is the supreme cricketer of my lifetime, and that was his greatest summer.