Johnny Wardle was one of the most controversial figures in English cricket in the 1950s, and his career ended in a blaze of headlines. But, as his Wisden obituary recalled, he was a brilliant bowler.

For some 10 years Johnny Wardle was one of England’s leading bowlers; he played in 28 Tests and would have played in many more had he not been a contemporary of Lock. Both were slow left-armers and in England the orthodox methods of Lock were usually preferred: abroad Wardle’s ability to bowl left-arm wrist-spin and googlies made him the more dangerous of the two. He was in fact the first top-class English slow left-arm bowler to employ this style, if one excepts an occasional left-arm wrist-spin from Roy Kilner: otherwise it had been confined to change bowlers like Leyland and Compton.

Wardle was equally at home in both styles. Working as a fitter in a coalmine during the war, he had made a big reputation in league cricket, but in 1946, though he played a match or two for Yorkshire, Arthur Booth was preferred as Verity’s successor in the county side. Wardle enjoyed a profitable season in the Second XI.

In 1947 Booth was stricken with arthritis and in the early part of the season Yorkshire found themselves for the first time in nearly 70 years without a slow left-armer. It was not until mid-June that they turned to Wardle. In his first innings, he took 5-41 against Somerset, and this was followed a few weeks later by 7-66 against Middlesex and then 6-28 against, Surrey. At the end of the season he had taken 86 wickets at 25.46 and secured a place in GO Allen’s highly experimental MCC side to the West Indies. Not surprisingly, with so little experience behind him, he was a failure on the tour, but he was quite undaunted, and how much he profited was shown when in 1948 he headed the Yorkshire averages with 129 wickets at 17.62.

Thenceforward he never looked back. Each year he took his 100 wickets and in Tests his record was 102 wickets at 20.39 and 653 runs with an average of 19.78. In England his chief bowling performance in these matches was 7-56 against Pakistan at The Oval in 1954, but in 1953 at Old Trafford Australia in their second innings were 35-8 when the match ended and of these Wardle had taken 4-7.

Against South Africa in 1955 he headed the Test match bowling averages with 15 wickets at 18.20. In Australia in 1954/55 he was a qualified success, most of the damage being done by the fast bowlers. But in 1956/57 in South Africa he enjoyed a triumph, heading the averages in first-class matches with 90 wickets at 12.25 (in all matches he took 105 wickets) and, though kept out of one Test by injury, taking in the other four 26 wickets at 13.80: in the second Test he took 12-89 in a memorable piece of bowling.

He was also a fine, fearless left-handed hitter in the lower part of the order, never deterred by any bowler’s reputation from hitting him hard, high and often, and frequently suggesting by his success that some of the earlier batsmen might have done better had they adopted more aggressive tactics.

His first-class career came to an unhappy end in 1958. On July 27 he received the expected invitation to go with MCC to Australia, but three days later the Yorkshire committee announced that they would not be employing him after the end of the year. Thereupon Wardle requested that he should stand down from the team for the Bank Holiday match with Lancashire because of comments he intended to make about his colleagues in a newspaper article to be published while the match was in progress. 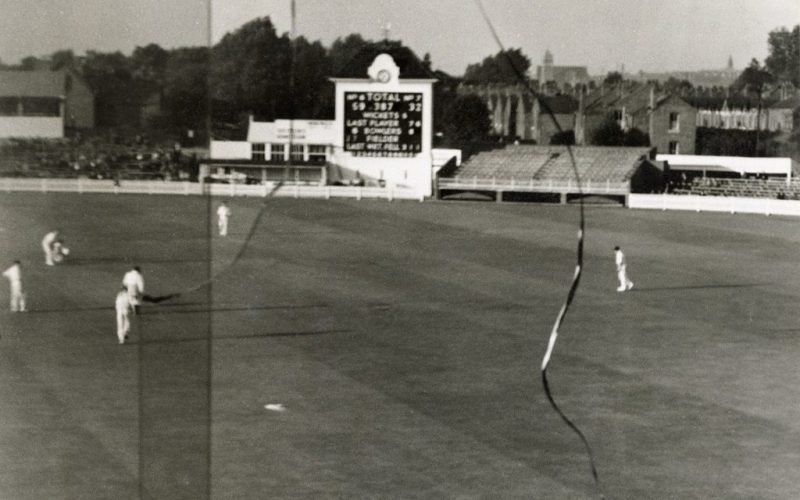 The view through the broken window of the television broadcast box at Edgbaston after Johnny Wardle’s hit smashed the window, circa 1957

His request was granted and the article appeared in the Daily Mail. At this point MCC felt they were bound to consider the question and said that they intended to do so at a committee meeting on August 19. Meanwhile the Yorkshire committee, meeting on August 11 after reading the articles, terminated Wardle’s engagement immediately. They explained that their original decision, which was unanimous, had been taken because on several occasions in the past he had been warned that “his general behaviour on the field and in the dressing-rooms left much to he desired” and he had paid no attention whatever. Now, by writing the articles without obtaining permission, he had in addition broken his contract.

On August 19 the MCC committee, having interviewed him, withdrew the invitation for the Australian tour. It was no coincidence that Peter May’s side suffered a heavy defeat. Wardle was still a beautiful bowler and he was an incalculable loss.

His further career may be briefly sketched. He bowled with great success in the Lancashire League (for Nelson and then for Rishton) and from 1963 to 1969 represented Cambridgeshire, taking in all 316 wickets at 14.14 and doing much to win them the Minor Counties Championship in 1963. For the majority of batsmen at that level he was far too good. In 1970 Yorkshire elected him an Honorary Life Member and recently they had appointed him bowling consultant to the county. He was also elected an Honorary Member of MCC In all first-class cricket he made 7,318 runs with an average of 16.11 and took 1,842 wickets at 18.95.