From a schoolboy wonder, Donald Carr rose to become a fine captain for Derbyshire, and even captained England in one Test. He was named a Wisden Cricketer of the Year in 1960.

Schoolboy prodigies, in any walk of life, only occasionally live up to their promise in later years. This is particularly true of cricket, but one who has is Donald Bryce Carr, the Derbyshire captain, for whom 1959 was a memorable year. Scoring 2,292 runs, he set up a new record for any Derbyshire batsman, beating the 2,268 by LF Townsend in 1933. He also became the first player to exceed 2,000 runs in a season for the county alone.

The first the public heard of Carr, apart from those specially interested in School cricket, was in 1945 when he and two other youngsters, the Hon. LR White and JG Dewes, were chosen for England in a Victory Test match against Australia at Lord’s. From that moment the career of Carr was followed with keen interest and his progress, via Oxford University, Derbyshire and England, has been steady, although not spectacular.

Today he is acknowledged as one of the best captains in England, a delightful batsman to watch, a brilliant close fieldsman, an interesting unorthodox slow left-arm bowler and, above all, a man who obviously enjoys the game and who is determined to play it in the best possible spirit.

Carr was born into a sporting atmosphere. His father, JL Carr, a regular officer in the Royal Berkshire Regiment, played cricket for the Army and Berkshire, soccer for Oxford and hockey for the Army. His two older brothers, Douglas and David, were also extremely keen.

While his father was in Germany with the Army of Occupation after the 1914-18 war, Donald Carr was born at Wiesbaden on December 26, 1926. He stayed in Germany only a few weeks, but after a short return to England the family left for India. The Carrs, minus their father, who remained in India, came back to England in 1931 and lived in the Hampshire New Forest. By this time Donald Carr, helped considerably by his brothers, was showing skill and tremendous interest in cricket.

The brothers watched Hampshire as often as possible and Donald remembers an amusing incident at one of their matches at Bournemouth. Kenneth Farnes, the Essex and England fast bowler, who was killed during the war, was one of the personalities of his day and the young Carrs were keen to obtain his autograph.

So were scores of other boys, and Donald, being very small and younger than most, found himself pushed more and more to the back of a long queue. After signing many books, Farnes noticed what was happening and invited a very agitated Donald Carr into the pavilion. There, after obtaining for him all the autographs of the players, Farnes took him to the bar for an orange squash. Then he made a hurried collection and Carr also received a box of chocolates and 10½d., much to the envy of his brothers.

At the age of eight Donald Carr went to the Forres Boarding School in Swanage where he received his first serious coaching from the Rev. RM Chadwick, a former Dorset player, who taught him a great deal.

In 1936, Carr’s father retired from the Army as a Lieutenant-Colonel and took a position as bursar at Repton School. That started the family connection with Repton and Derbyshire. Donald followed his brothers to Repton in 1940. David, the middle brother, made the School eleven and Donald first played for them in 1942 when 15. Two years later he became captain. He recalls that throughout his three years in the side Repton never lost to another school until the last match he played for them, when they went down to Rugby.

Donald Carr was already above average as a boy cricketer when he went to Repton and under the guidance of the master in charge of cricket, LB Blaxland, and the former Derbyshire professional, Garnet Lee, he developed into one of the best young all-rounders of his day. Then he bowled orthodox slow left-hand and, as now, was an attractive all-round right-handed batsman.

His qualities as a leader, no doubt inherited from his father, were recognised and in 1944, he captained The Rest against the Lord’s Schools and also the Public Schools’ side against a Lord’s XI.

Carr left Repton at Christmas 1944 and joined the Army on New Year’s Day 1945. He was immediately sent to Northern Ireland, where he played a little local cricket, mostly under wet conditions, before going to Wrotham for a pre-OCTU course in the summer of 1945.

White and Dewes had already been chosen for the England side at Lord’s and Carr received his invitation when George Pope of Derbyshire withdrew. Of that game Carr remembers how overawed he was playing in such company as Hammond, Hutton, Washbrook, Edrich, Hassett and Miller. He first went to bat in murky light, having just seen Hutton, after scoring 104, lose his middle stump to Miller. Carr was soon bowled by Miller and not unnaturally had rather an unhappy experience, with 5 runs and no wickets in the match. Still, he looks back on it as a great occasion.

Carr remembers how overawed he was playing in such company as Hammond, Hutton, Washbrook, Edrich, Hassett and Miller

After going to Sandhurst, Carr gained his Commission in the Royal Bershire Regiment in February 1946 and that summer played for Combined Services and Derbyshire. Going to Burma with his regiment, he was lost to first-class cricket in 1947, but on leaving the Army he went straight to Oxford in April 1948.

He did not find it easy after the break in Burma, where only a little cricket took place on matting and he did not get into the side against Cambridge in his first year. In 1949, he really started to blossom forth and for the University and Derbyshire he scored 1,210 runs and hit three centuries, with an innings of 170 for Oxford against Leicestershire still the highest of his career.

With AH Kardar as Oxford’s slow left-hander, Carr decided to change from orthodox bowling to chinamen and googlies, but with it he lost the accuracy which had been one of his strongest points. Still, in 1950, when he captained Oxford, he took six for 39 against Lancashire. Carr recalls that the University magazine, writing about this achievement, said: “The fact that Carr was able to take six for 39 does not speak highly of the Lancashire batting.” Carr stayed at Oxford one more year and his 34 and 50 helped to bring victory over Cambridge by 21 runs in 1951, when he also headed the Derbyshire Championship averages.

Carr took a position with a Midlands brewery concern, but before starting work he was given leave in order to tour as vice-captain of the MCC team in India, Pakistan and Ceylon. He played in two Tests against India. In the first, at Delhi, he and Watkins saved the game when England were in an almost hopeless position, staying together for just over five hours and adding 158. This Carr declares was the most difficult and tiring innings of his career, being all against his natural instincts. 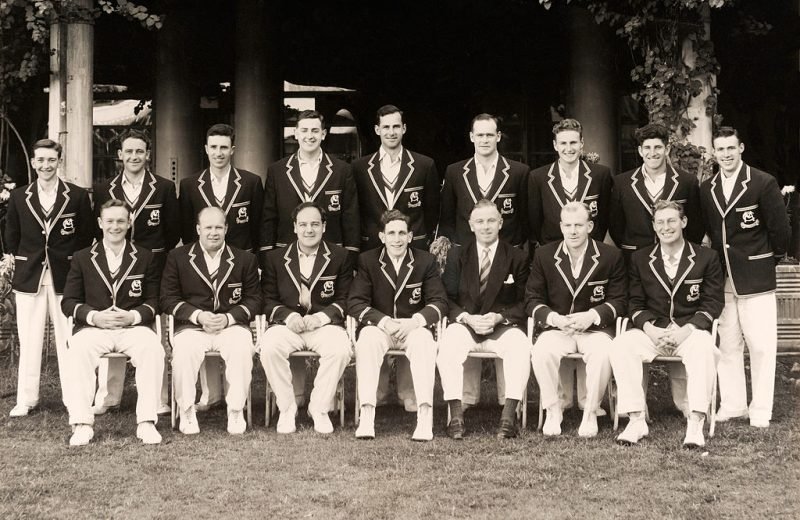 When ND Howard went down with pleurisy Carr became England’s captain in the fifth Test at Madras. With the sense of humour which characterises him, Carr says he created a unique record by being the only England captain who has ever lost a Test match to India.

From 1952 onwards, he became a regular Derbyshire player. In 1953, he took the position of assistant secretary to the club and in 1955 succeeded GL Willatt as captain. Until 1959, the year 1955 was his most successful, with 1,659 runs and 45 wickets, including his best bowling performance, seven for 53 against Lancashire at Chesterfield. In 1955/56, Carr captained the first MCC A team in Pakistan and apart from one unfortunate incident he regards this as a most enjoyable and happy tour.

The good pitches of 1959 enabled Carr to produce his strokes with increased confidence and he played many delightful innings. Most of his runs come from pulling, on-driving and cutting, and if there is any weakness it is in off-driving, where he is inclined to push rather than go right through with the stroke. Even so, in recent years, he has developed a fine forcing off-drive off the back foot.

As a bowler he considers he is not now as good as he was while at school, but he is able to turn the ball appreciably on any type of pitch and is often useful at breaking a stubborn stand. He admits to learning a lot about the finer tactics of the game from Gladwin, the senior professional at Derbyshire until he retired at the end of 1958.

An interesting memory is of being at the other end when Ridgway of Kent took four wickets in four balls at Folkestone in 1951. Carr made 103 not out in the first innings and was 94 not out when Willatt declared in the second innings. The sequel came last year when, for the first time, Carr made a hundred in each innings – and it was against Kent at Canterbury.

A splendid amateur soccer forward, Carr gained his Blue at Oxford and appeared for Pegasus in two Amateur Cup finals at Wembley. He is also a good squash player and a useful golfer.

His one regret is that he never saw Bradman play. He had an opportunity in 1934 when he went to Southampton to watch the Australians against Hampshire. Unfortunately he arrived at the ground a quarter of an hour late and to his dismay Australia were then 10 for three with Bradman out for one of his rare ducks.

On January 1, 1960, Carr became secretary of Derbyshire, succeeding WT Taylor, who had occupied that position for over fifty years.