The death of Don Bradman in 2001 brought some brilliant examinations of his career and cultural impact in the 2002 Wisden Cricketers’ Almanack, including this look at his close connections with Britain

Batting statistics, as readers of Wisden know only too well, put Sir Donald Bradman in a league of his own. Yet, his records, his scoring speed, even his double and triple Test hundreds do not alone explain his special relationship with the British public. Runs were a necessary, but not a sufficient condition of Bradman’s heroic status in Britain. His batting explains the awe and admiration in which he was held. But it does not explain the remarkable affection of the British public for a man who, as the Daily Mail observed in 1930, “was a menace to English cricket”.

His four tours of England between 1930 and 1948 gave the public enough time to get to know him – and for many to see him – but not enough to tire of him or take him for granted. In 1948, he was said to be the best-known public figure after King George VI and Churchill. Presenting him with a replica of the Warwick Vase, donated by public subscription to its “Bradman Fund”, The People claimed Bradman had been “honoured in a way that no other overseas sportsman has enjoyed”. This adulation spread beyond the heartlands of English cricket, spanning social classes and generations, cutting across the regions and nations of Great Britain. He played his last competitive matches in Scotland and was asked for his autograph 25 times on a short walk in Aberdeen.

Why did the British public come to like Bradman so much? Being an Australian of English descent was, of course, an advantage. Bradman’s career, however, also happened to coincide with the inter-war boom in radio broadcasting and the rise of the cinema newsreel. The press, especially mass circulation “Sundays”, such as The People and the News of the World, whose joint circulation reached 30 million by the time Bradman retired, gave extensive coverage to Test cricket, especially the Australian tours. His first autobiography, My Cricketing Life, was serialised in the News of the World in 1938. Never had so much been known by so many about so few, as Churchill might have said when he bumped into Bradman at Victoria station in 1934 and had the Daily Mail photograph the two of them shaking hands. 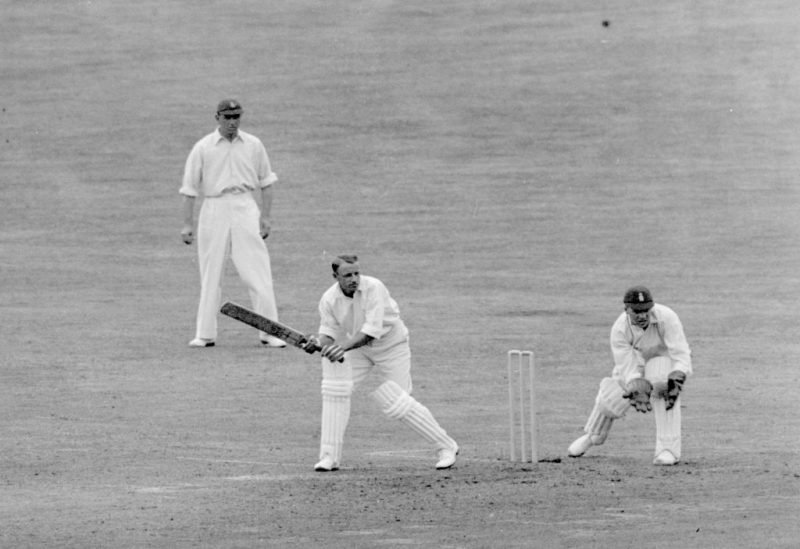 For all its subsequent warmth, the British relationship with Bradman got off to a cool start. His assault on England and the English counties in 1930 left the public awestruck and a little resentful. This was not just a matter of his treatment of the local bowlers. His natural reticence and puritan instincts irritated his own team and the English public after his record Test innings of 334. Twenty years later, he was still wondering if he was expected to parade through the streets of Leeds. The press had mistaken his youthful shyness for petulance. It took time for him to realise that he needed, and lacked, the common touch.

When Bradman next appeared in England in 1934, it was in the wake of the Bodyline tour of Australia in 1932-33. By then the English public – and MCC – were having second thoughts about the tactics of physical intimidation employed by Douglas Jardine to stop Bradman. England had not emerged well out of their bowling war. Shared values of sportsmanship were more important than winning at all costs; there was an unspoken guilt of which Bradman was the chief beneficiary. He had, moreover, stood up well to the battering – he still had the highest average for the series – and emerged from it with some dignity. JM Kilburn caught the new public enthusiasm for Bradman, which was especially strong in Yorkshire: “The crowd raced to the pavilion and made a lane halfway to the wicket.” As he went in, “there was a silence of suspense; a murmur of ‘He’s here,’ swelling to a roar of welcome”. He went on to score 304.

That summer of 1934 was the turning point in Bradman’s relationship with the British. Fair play was part of the national self-image, and it would have been perverse and petty to deny Bradman his laurels. Then fate intervened. At the end of the series, he was suddenly rushed into hospital with peritonitis. For a day or two his life was in danger. The public suddenly saw this remarkable run-making machine in a new light as a young man with a new bride, whose dash from Sydney to Perth to get the first boat caught the popular imagination.

The Daily Mail, one of Britain’s biggest-selling newspapers, kept up the bulletins from his bedside, reporting the Don wisecracking with the nurses: “What’s the score? Is it over 100?” To general relief, he not only recovered quickly, but had also shown the first signs of a sense of humour. He spent a pleasant time in England convalescing with his wife. “Don and Jessie”, as they were now affectionately known, fell in love with the English countryside. “Nothing in the world ever appealed to me more than England as nature made her,” he wrote later of that time; and nothing could have pleased Stanley Baldwin and the majority of Englishmen more.

Bradman began to apply the same meticulous thoroughness to answering the thousands of letters he received that he took to his batting. He was captain for the next tour of England in 1938, and this gave him a new and much wider public platform. Cricket captains were expected to be sporting ambassadors, attending endless public functions and making polite speeches. Bradman, the plain country boy turned stockbroker, had to learn the etiquette of representing his country in the “mother country”. In fact, Bradman mastered the art of being a gentleman so well that some of his Australian team-mates never forgave him. His new gentility, however, went down very well in Britain. 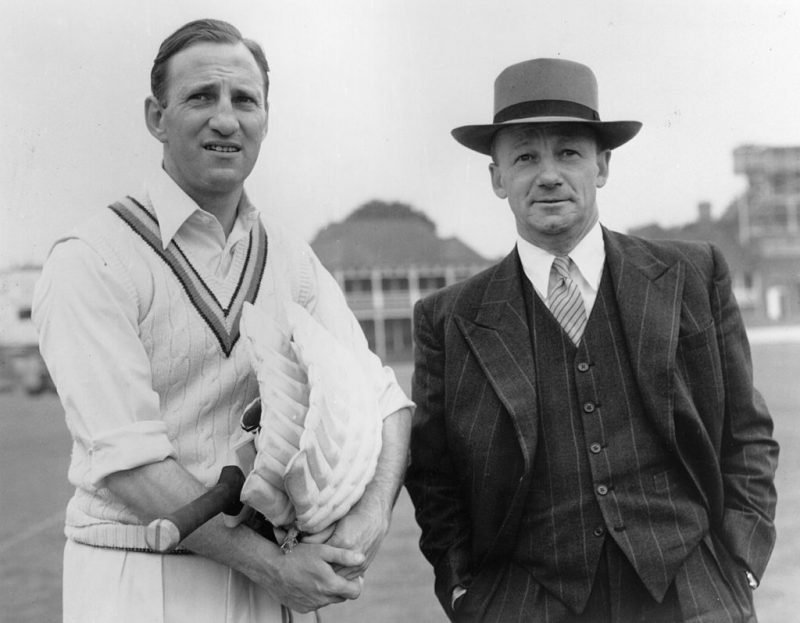 History, too, was running his way. Anglo-Australian relations had sunk to a low ebb in the early 1930s, but by 1938 both countries were anxious to reinforce the imperial bond in the face of mounting international tension. Britain feared Germany; Australia feared Germany’s new ally, Japan. Bradman was a firm believer in the British Empire; he was a Protestant, a Freemason, an imperialist and a conservative who strongly opposed what he saw as the anti-British tendency of Irish Catholics in Australian cricket. Indeed, Bradman’s bitter dispute with Bill O’Reilly, Jack Fingleton and others did him no harm in England. Britain saw the best side of Bradman. His integrity, his respect for the monarchy, his generosity when Hutton broke his record in the final Test at The Oval in 1938 were music to the British ear. As a captain, he endorsed the values of sportsmanship – “the very essence of this great game” as he later wrote in The Art of Cricket – which had a profound resonance with a broad swathe of the British public.

World War II strengthened a bond that was already strong. Hence, when Bradman arrived for his final series in 1948, Britain rolled out the red carpet. RC Robertson-Glasgow set the tone. “We want him to do well,” he chirped, “we feel we have a share in him.” And he did do well. The Australians were unbeaten. Bradman’s was a triumphal progress to Balmoral, “cherishing the friendly, homely manner” of the royal family. Getting a duck in his final innings against England and missing his century Test average by a decimal point oddly enhanced his status. When he received his knighthood, he was suitably modest, claiming he saw it as “the medium through which England’s appreciation of what Australian cricket had meant to the British Empire” could be expressed.

The knighthood also holds the key to another aspect of his appeal. Like the bulk of the British, he believed in both meritocracy and deference. He respected hierarchy so long as talent was properly recognised. Like Jack Hobbs and Herbert Sutcliffe, Frank Woolley and Denis Compton, Bradman’s own life reflected a wider pattern of upward mobility. “I could not help thinking that this knighthood was a sporting example to the world of true democracy,” he wrote in A Farewell to Cricket, adding that “the same opportunity exists for every Australian boy”. To the middle classes, Donald Bradman, batsman and stockbroker, stood for suburban virtue rewarded. To the working man, his blend of virtuosity and grit struck a chord, especially in the North, where his professionalism was more appreciated than in the South. Physically he was slight, with the deceptive frailty of that other great sporting hero of the time, Stanley Matthews. Bradman was treated like an honorary Northerner and was “greeted like an emperor by the crowd” at Headingley in 1948. On retirement, he was made an honorary member of both Lancashire and Yorkshire.

“If statistics were the last word in cricket, it would be easy to prove that Donald George Bradman was the greatest cricketer who ever lived,” The Times wrote in a farewell leader, adding tartly, “happily they are not.” And there were still a few reservations around the Long Room at Lord’s about “the little robot under the green peaked cap”. Where was the fun, the bravura or the classicism in Bradman? Yet, even his few critics had to admit that “no one has contributed more to the game”.

The Times closed on an elegiac note, imagining a future “Australian batsman… piling up a century” – a Steve Waugh perhaps – while “old stagers who watch him will be able, however finely he plays, to murmur: ‘Ah, but you should have seen Bradman.’”

Richard Holt is research professor at the International Centre for Sports History and Culture at De Montfort University, Leicester, and author of Sport and the British