Ken Farnes was an unusual cricketer – a fast-bowling amateur – but in the late 1930s no batsman relished facing him for Essex or England.

Kenneth Farnes, the Essex fast bowler, is essentially a natural cricketer. Born at Leytonstone on July 8, 1911, he began playing cricket when very young and derived much love for the game from his father, a prominent club player.

At Royal Liberty School, Romford, where he captained the eleven, Farnes received great help from the Headmaster, Mr S.B. Hartley, who still takes a keen interest in his career. Afterwards Farnes played for Gidea Park and in a match with the Essex Club and Ground in 1930 bowled against Mr P. Perrin, the former Essex batsman and present member of the Test selection committee.

Mr Perrin was so impressed by his bowling that he at once brought him to the notice of the county authorities and Farnes a few weeks later made his debut for Essex against Gloucestershire at Chelmsford. A match analysis of no wicket for 76 was nothing extraordinary, but in his next game he dismissed five Kent batsmen for 36 in one innings.

The following year Farnes went up to Cambridge and was in the eleven of 1931 and the next two years. He assisted Essex during the later part of each season and, after taking up a scholastic appointment at Worksop College, continued to play for the county during the school holidays. Incidentally, his regular appearance in the side generally coincided with a run of success by Essex.

In 1934 his eleven wickets for 131 did most towards Essex obtaining their first win over Yorkshire since 1911, and chosen that year for the first Test match with Australia he achieved a feat in which he takes special pride – five wickets in each innings. 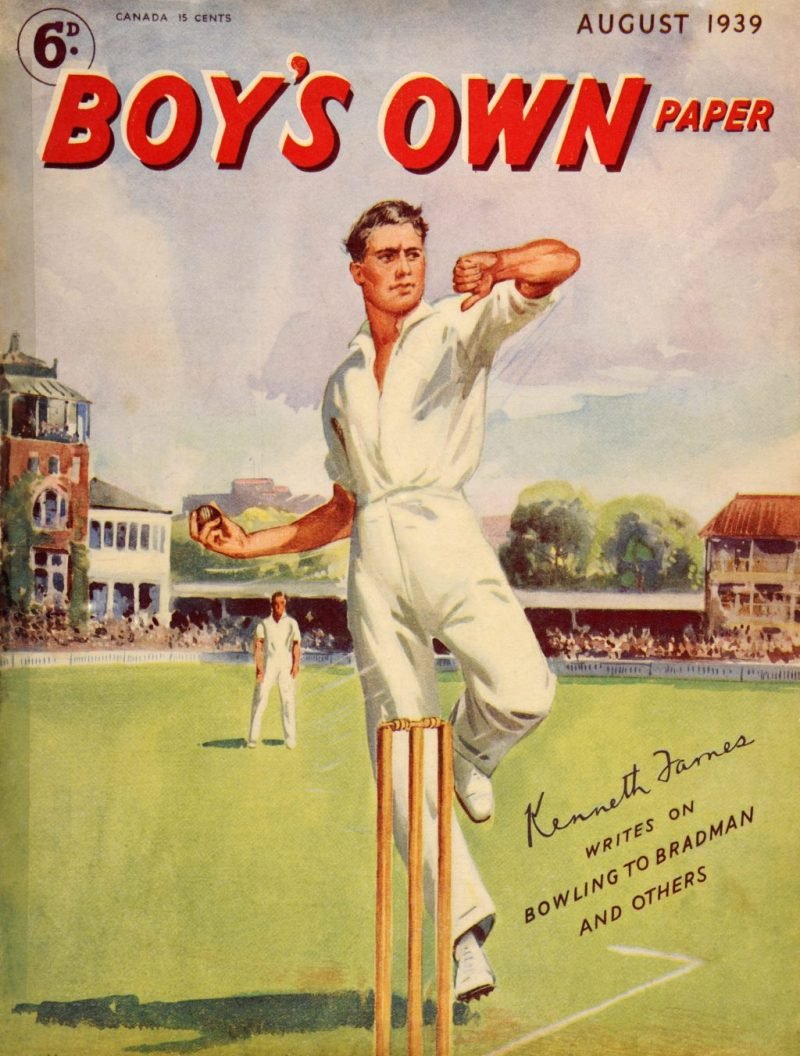 A vintage illustration on the cover of “Boy’s Own Paper”, a magazine featuring Ken Farnes bowling at Lord’s, circa August 1939

In the 1936 Gentlemen v Players match he caused a sensation by what was regarded as the fastest bowling seen at Lord’s since the time of C.J. Kortright. In one deadly spell in the second innings Farnes clean bowled Gimblett, Hammond and Hardstaff; in each case a stump went catapulting head high before dropping at the feet of the wicketkeeper 12 yards back.

When he toured Australia with the MCC team the next winter, he played in only two Tests but took six wickets for 96 in an innings of 604 in the fifth Test and was the most consistent bowler of the tour. Last summer he came right to the peak of his form. By securing 15 wickets for 113 against Glamorgan at Clacton he accomplished the best performance of his career. His eight wickets for 43 in the first innings of the Gentlemen v Players match was described as the finest bowling in the series since Arthur Fielder in 1906 took all ten wickets in the Gentlemen’s first innings.

For a man of his speed, Farnes takes what is nowadays considered a short run – one of eleven paces – but he quickly gets into his stride and, when delivering the ball, is moving at a great pace. Perfectly proportioned, he is just under 6ft 5in, and weighs 15st 6lbs and, as he sends the ball down from well over eight feet, it is obvious that on a hard wicket his deliveries are liable to rise sharply.

To add extra nip to his bowling he flicks his wrist down at the last moment but, this apart, he has nothing in the way of characteristics. He holds the ball with one finger on either side of the seam in a loose grip and, by natural body action, imparts swerve and occasionally makes the ball dip late or break back from the off.

This proved to be one of the most poignant of all Wisden Cricketer of the Year profiles. Ken Farnes died on active service in 1941 when the plane he was flying crash landed.