Colin Cowdrey excelled as a cricketer in his teens and his continual brilliance for Kent and the Gentlemen thereafter prompted comparisons with the great Walter Hammond. He was a Wisden Cricketer of the Year in 1956.

From the moment he was born in Bangalore in southern India on Christmas Eve, 1932, Michael Colin Cowdrey was destined for cricket. In naming him, his father gave him his initial start, MCC. Some sons disappoint their fathers by not adhering to their appointed course, but happily for the Cowdrey family, Colin always possessed cricket ability and a few days after celebrating his 22nd birthday with MCC in Australia, he hit his first Test hundred for England.

Unfortunately his father, EA Cowdrey, did not live to see his son reach the summit. Colin lunched with his parents on board the Orient liner Orsova before bidding them farewell; three weeks later, when MCC arrived at Fremantle, came the sad news of his father’s death. In his day, Mr. Cowdrey senior was a capable batsman, but tea-planting claimed most of his time. He played some cricket and when Arthur Gilligan’s MCC Team toured India in 1926/27 he made top score, 48, for the Europeans against them at Madras. Opposed to him were those two fine bowlers, MW Tate and WE Astill, who later as coaches at Tonbridge School helped to fashion young Colin’s career.

From the age of four Colin used to play with his father and one of the native servants at their home at Bangalore, but soon he was on his way to England, where from five and a half until thirteen he lived at Homefield Preparatory School at Sutton in Surrey. There, Cowdrey says he really learned cricket from the headmaster, Mr C Walford, whom he describes as a cricket fanatic. In the summer, Sunday was the only rest-day. Mr Walford coached the boys four days a week and the other two were devoted to matches.

When only seven, Cowdrey made 93 against another school. This won him a Jack Hobbs bat and an inspiring letter from the Surrey idol. Colin says that letter fired his ambition. He put it in a frame and it hangs in his bedroom to this day. Even in those tender years, Cowdrey hit plenty of hundreds and although he used to bowl leg-breaks at the nets, he kept wicket until he was eleven. Then his headmaster told him the time was ripe for him to bowl in matches and already he could send down a googly.

Small wonder that when Cowdrey went to Tonbridge School in 1946 at the age of thirteen, he jumped straight into the first team, though not as a batsman. He began in May at number eleven, gaining his place as a bowler, but soon his batting talent was recognised and when the team went to Lord’s in July to meet Clifton he had advanced to number three in the order.

He was the youngest player to appear in a Public Schools match at Lord’s, but already the steel-nerve which characterised his batting in Australia was evident. He scored 75 and 44 and at the crisis claimed the last five Clifton wickets, thus snatching a thrilling victory for Tonbridge by two runs. For five years, the last two as captain, Cowdrey dominated Tonbridge cricket; he scored 2,894 runs and took 216 wickets. He finished his school career as the Public School captain at Lord’s, marking his departure with scores of 126 and 55 in the annual match with Combined Services.

It was on August 19, 1950, that Cowdrey began his first-class career for Kent at Derby. His side were overwhelmed but he scored 15 and 26 and Wisden commented: Cowdrey, the Tonbridge School captain, made a promising debut for Kent. Cowdrey remained at Tonbridge until the following April and then he spent a full season with Kent, gaining his County cap during the Hampshire match at the Canterbury Festival. Earlier that summer he hit his first first-class hundred, 143 for Free Foresters against Oxford University in the Parks, and he wound up a memorable summer by hitting the only century of the Scarborough Festival – 106 for Gentlemen against Players. In October, he entered Brasenose College, Oxford.

By then his reputation was growing and when the cricket season came round again PDS Blake, the Oxford captain, needed only three matches to make up his mind to award Cowdrey his Blue. That was on May 16, 1952. His only hundred that year was for Kent against India at Canterbury, but in 1953 he left all his other performances behind, scoring 1,917 runs including four centuries.

He chose Lord’s for some of his best displays, for he hit 116 against Cambridge and at the end of August he played two grand innings of 50 and 57 for Gentlemen of England against the Australians. In that match he came under the full fire of Lindwall and Miller. They gave him a thorough test, bumpers and everything; he met them with the calm of a matured batsman.

Everyone who saw those displays, including the Australians themselves, knew that England had produced a batsman far above the ordinary. They compared him with WR Hammond, whom he resembles so much in confidence, build and method. Cowdrey has the same height, the same massive shoulders, and the same quality in his straight and off drives.

It was with some disappointment that Cowdrey found himself passed over at that time for the MCC Tour of West Indies. The season of 1954 saw him captain of Oxford and he left no doubts as to his flair for leadership. It was a wet summer and for various reasons, including examinations, Cowdrey did not quite approach his best form. Both his aggregate and average fell. Happily for England the selectors had not lost faith in him. They gave him a place in Len Hutton’s team for Australia and soon the wisdom of this decision became manifest. 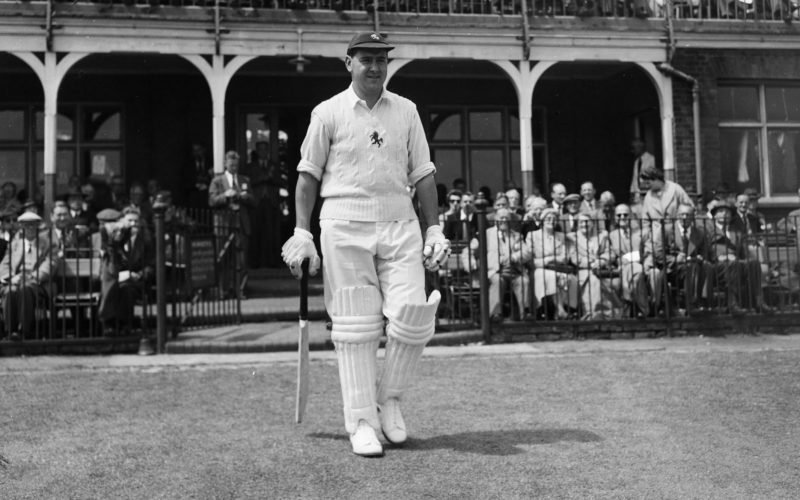 Cowdrey realised this was his great opportunity. If he did well, a life of cricket was at hand and throughout the tour he proved to be one of only two dependable batsmen in the side. The other was Peter May, with whom he shared a cabin on the ship and with whom he was usually seen in company both off the field and at the crease. The full details of that wonderful tour and the part Cowdrey played can be found elsewhere in this book. Hutton considered May and Cowdrey the two best batsmen in the world under twenty-five.

Australian sunshine and fast pitches brought out the best in Cowdrey. On his first appearance at Sydney he hit two centuries, 110 and 103, against New South Wales, being easily the youngest English cricketer to accomplish this feat. Such was Hutton’s problem over finding someone to open the innings with him in the Tests that Cowdrey, for the first time in his career, went in first in that second venture. His success sorely tempted Hutton to promote him permanently, but after one more trial the shrewd captain preferred Cowdrey to occupy his normal position.

Cowdrey returned to England in April 1955 ready for his two year’s National Service in the Royal Air Force. For years his feet had given him considerable trouble, but he never mentioned it to the authorities. Never did he expect they would become front-page news and lead to questions in Parliament. He suffers from stiffening of the joints in both big toes and when playing cricket always wears specially made boots.

When sixteen he underwent a manipulative operation and spent the whole of the Easter term in the Tonbridge School sanitorium with both legs completely encased in plaster. That brought about a distinct improvement, but he knew that at some time another operation would be essential to break down the joints. He hopes to put off that operation until he is twenty-five and although no permanent cure can be guaranteed, he thinks there is a sporting chance that his feet will last him through his cricket career until, perhaps, he is forty.

Most people would expect that a young athlete returning from a triumphant cricket tour of Australia could fulfil his initial Forces training without question. Hence the doctors who received him prior to his call up passed him one to the other. This is Cowdrey the cricketer; he’s all right, they said.

It was on the day he joined the RAF that the medicos raised the first query. At once they spotted the state of his feet. In Cowdrey’s own words, they were scared of allowing him to go before a drill sergeant. Permanent injury and a life pension might have resulted. So they put him in the sick bay far away from the drill sergeants and telephoned Whitehall with their problem. In a few weeks Cowdrey was a civilian again.

So he rejoined the Kent team. He hit his first Championship century, 139 against Northamptonshire at Tunbridge Wells, and later he repeated his Sydney feat at the expense of the Essex bowlers, 115 and 103, both not out, at Gillingham. A very badly damaged finger, injured when playing against South Africa in the Manchester Test, kept him idle for some weeks and gave England the chance to experiment.

During his first two years at Oxford, Cowdrey played Association and Rugby football, but because of his troublesome feet he was compelled to give up those winter pastimes. He still plays golf, squash, tennis and rackets. Indeed, he won his Blue for rackets and in 1953 was runner-up in the English Rackets Championship at Queen’s Club, falling only to Geoffrey Atkins, the World Champion.

As he had taken up a business appointment with an emporium in Kent whose managing director is another who lives for cricket, Cowdrey should find scope to continue for some years to please his admirers.

Colin Cowdrey went on to become one of England’s greatest ever cricketers and in 1968, became the first player to play 100 Test matches. His tally of 7,624 Test runs was the second highest at the time of his retirement, after Sir Garfield Sobers‘ 8,032. He scored a whopping 42,719 first-class runs with 107 hundreds