After a slow start to his career, Maurice Tate announced himself as a bowler of real class in the summer of 1923. It earned him a Wisden Cricketer of the Year award.

Nothing in last season’s cricket was more striking or of better omen for the future than Maurice Tate’s jump into fame as the best bowler of the year. He was very good in 1922, but was not then regarded as more than one among many probables for future Test matches. Last year, if it had been necessary to put an England eleven into the field against Australia or South Africa, he would have been one of the first men chosen.

Maurice W. Tate was born at Brighton on May 30, 1895. A son of F. W. Tate, who for years did such excellent work for Sussex, he has an inherited talent for the game, but except in the happy possession of a free natural delivery he is very unlike his father as a bowler. F.W. Tate was a slow bowler; Maurice is on the quick side of medium pace.

The now-famous cricketer made his first appearance for Sussex at the age of 17, but he did not come into prominence till after the war, and it may fairly be said that nothing in his doings till 1922 suggested the position to which he has so suddenly risen. Up to that time he was an all-round player rather than in any special sense a bowler.

In 1922 he found his true metier, and last summer he was by general consent the best bowler in England, taking in first-class matches 219 wickets for just under 14 runs apiece. He was brilliantly successful under all sorts of conditions, but his great triumph came in the match at Lord’s in August between England and The Rest.

On the second afternoon of that game he was for a spell irresistible, taking five wickets after luncheon without a run being hit from him. He may have bowled quite as well on other occasions, but he never looked quite so deadly. He has all the good qualities of bowlers of his type – accuracy of length and power to make the ball break back or go away a little with his arm – but his prime merit is extra pace off the pitch. Though much slower than Arthur Gillian through the air he often, I am assured, comes off the ground quite as fast. 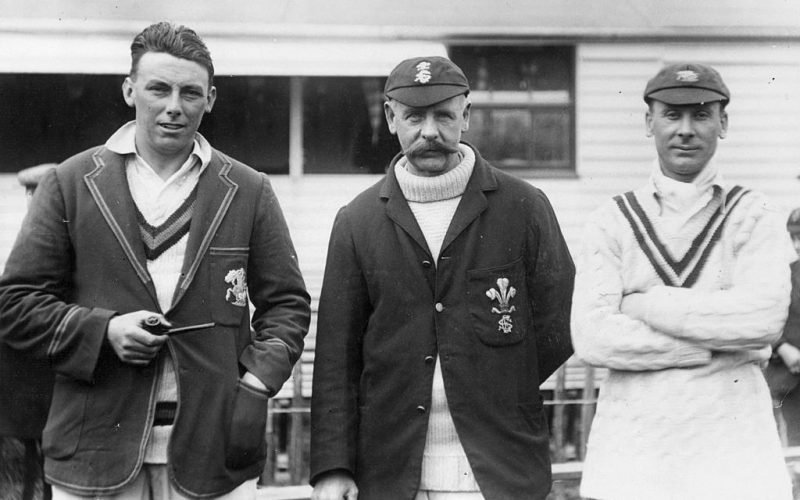 Maurice Tate, Tom Hayward and Jack Hobbs at Wisbech before a game against the MCC, circa April 1926

Whether in him will be found the Test bowler of whom we are so badly in need remains to be seen, but many of the best judges are very hopeful about him. It is a great point in his favour that, thanks to his beautiful delivery, he can get through a lot of work without undue fatigue. He had so much to do last summer that he might well have been tired out, but except for one day at the Oval in September he was effective to the end, and finished up quite fresh.

Tate is a good, free-hitting batsman, capable at any time of getting his fifty runs, but one hopes that for the next few years, at least, the lure of long scores will not attract him. With heavy tasks ahead for English cricket his business is to take wickets.