Allan Border was a symbol of Australian defiance in some lean years, and later the captain who led them to world domination. In 1982, he was a Wisden Cricketer of the Year.

During the memorable 1981 Test series there often stood, sure-footed on the slippery slope of Australian batsmanship, an earnest, chunky figure, a well-rounded cock-robin of a cricketer. One phase of his lonely defiance endured through 15 hours, beginning at Old Trafford and closing with his final ball of the series at The Oval, the full product of this extraordinary sequence being 313 runs: his seventh and eighth Test hundreds, both not out, and an 84. A broken finger on his left hand, and a chipped if trusted bat made his job no easier. Allan Robert Border was no longer to be regarded as merely useful and promising; he was demonstrably world-class.

Four years previously, with the passionate sense of responsibility found in all ambitious professionals, he had set about broadening his experience by venturing to England to play league and county Second Eleven cricket – every bit of match-play he could find. In 1977 he played in the meadows of the Graces, in Gloucestershire, and carried Downend to first place in their league. He actually played for the county, against Oxford University; and scored an unbeaten 159 for DH Robins’ XI against Cambridge University at Eastbourne.

A year later, learning to contain his natural aggression, accustoming himself to the cerebral claustrophobia induced by a helmet, he was a prolific professional for East Lancashire in the Lancashire League, amassing a record 1,191 runs and taking 54 wickets with unpretentious left-arm spin which in time was to claim a few distinguished Test wickets. Back in Australia, while Lancastrians were still marvelling at his 179 not out (thirteen sixes, fifteen fours) against Rawtenstall, he won his first Test cap. He was to go on to make more runs (1,070) in his first year as a Test cricketer than anyone before him.

One of four sons of John Border, who was in the wool business, and his wife Sheila, Allan was born on July 27, 1955, in Cremorne, a tranquil, fashionable northern harbourside suburb of Sydney. When the family moved a mile or two to Mosman, backyard cricket with brothers John and Brett became a precious and obsessive routine; so did surfing at Manly.

School was a place for furthering sporting experience, though he did manage to obtain his Leaving Certificate. North Sydney Boys’ High School had already produced Test players: Graeme Hole, Ian Craig, and Peter Philpott, coach to the 1981 Australian touring team, all sprang from its environs, and it was soon clear that the lad who did himself justice in the state schoolboys’ carnival and in the junior grade competitions had every prospect of emulating them. 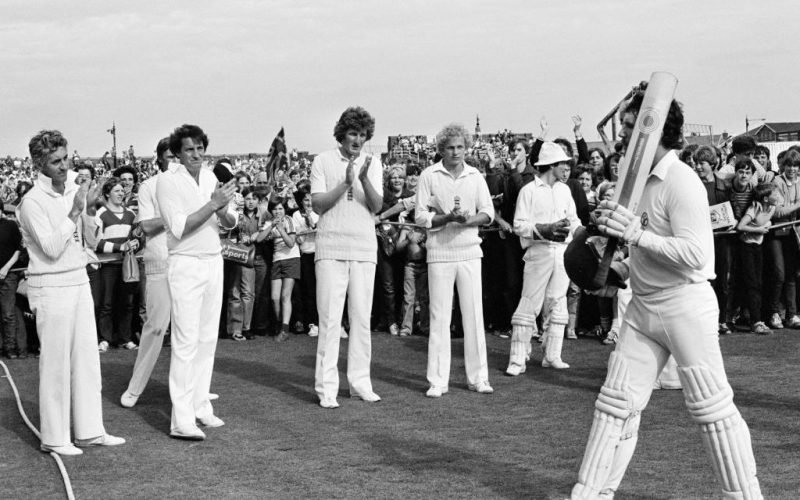 He became a working man, beavering away as a clerk in the film library of an oil company, dreaming all the while of success in the higher realms of cricket, while playing at weekends for Mosman, where a strengthening of temperament as well as technique was sustained by former Test players David Colley and Barry Knight.

Border was ushered into first-class cricket in January 1977, and a stream of useful middle-order innings – some labelled fighting, some attractive – over the next two years culminated in his first century, a patient effort against Western Australia at Perth. Three weeks later came his introduction to Test cricket, vacancies having occurred in the absence of Kerry Packer’s World Series players.

The 23-year-old Border’s debut seemed a happy portent, for the match at Melbourne against Brearley’s otherwise triumphant side was won, even though Border himself made only 29 and 0 (run out by Hendrick from backward short leg as he toppled forward after his sweep shot). His unbeaten 60 and 45 in the next Test, on his home ground in Sydney, proclaimed him to a wider audience. Comparisons with Neil Harvey, prince among Australian left-handers, were inevitable and far from absurd. After twin failures at Adelaide, however, Border was relegated to twelfth man.

Before the busy season was over he was back, making 105 in six and a quarter hours against Pakistan at Melbourne (when his dismissal triggered a collapse from 305-3 to 310 all out, Sarfraz 9-86), and 85 and 66 not out in the Perth Test. 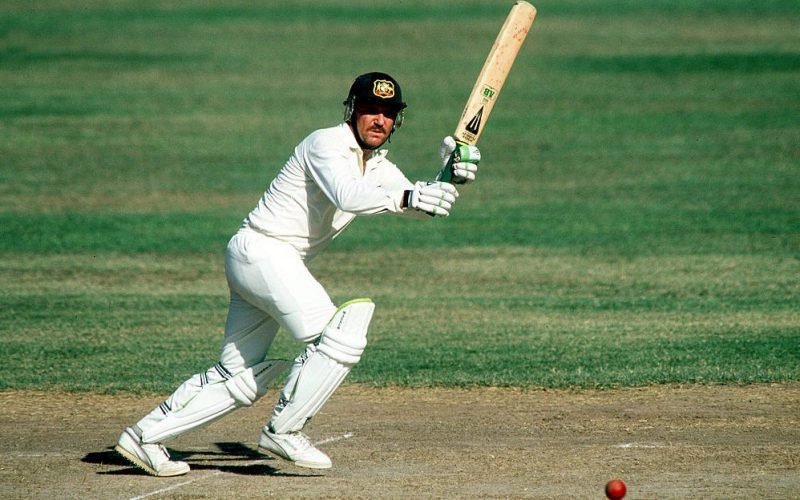 Allan Border was the second batsman to the 10,000 run-mark in Test cricket, after Sunil Gavaskar, and the first to 11,000

After an undistinguished World Cup visit to England, Border continued towards maturity through fifteen Test matches – in India, at home against England and West Indies, and in Pakistan – in a mere 28 weeks. Joe Darling, a left-handed champion at the turn of the century, played in 34 Tests over ten years. Border hit 162 at Madras in his first Test innings in India, displaying excellent footwork against the constant flow of spin; 115 against England at Perth, finishing with an inch-long scar on his temple after being struck by a short ball from Dilley; and, after having a vulnerability outside the off stump spotlighted by Garner and the rest of the West Indies pace attack, he crowned this hectic period with 150 not out and 153 at Lahore, trying to break the Test record for sixes as he sailed to a unique performance.

Two other incidents of profound importance followed. He married, and on his wedding day he accepted a lucrative offer to transfer to Queensland, against whom he had recently scored his first double-century.

He brought some distinguished stroke-play to the doomed Centenary Test at Lord’s, then had three unspectacular Tests at home against New Zealand, and three against India, the Melbourne Test bringing him his sixth Test century. He also had more stitches in his head when a Lillee bouncer lacerated it in a state match.

He came to England in 1981 as a pillar in Kim Hughes’s batting structure, a structure soon to be revealed as faulty. Border alone of the established players came through with reputation enhanced. He was afflicted as seriously by depression as any of the Australians following the Headingley and Edgbaston defeats, and ceased to enjoy his cricket. Amends were then made, restorative runs having come in the Worcestershire match between the two Test setbacks. His Old Trafford century was the slowest ever scored for Australia, a record he was not particularly proud to acquire from his captain; but it revealed the full depth of the man’s character.

The beady, pale-blue eyes above the stubbly chin watched the English bowlers with an unrelenting concentration. Posterior jutting, he waited motionless. His strokes were played with an impressive instinct of choice and a simple cleanness of movement. In three crowded years he had amassed 2,593 runs in 61 Test innings, average 51.86.

At the summer’s end Sir Len Hutton surmised him to be the best left-hand batsman in the world. That was the accolade that AB or Pugsley, as his friends know him, had quietly and determinedly set out to win on that distant day when, in short trousers, he first sensed his cricketing gifts on the lawn at Mosman.