The retirement of Len Hutton in 1956 brought to an end the careers of one of England’s greatest batsmen. Wisden chose one of the game’s greatest writers, Neville Cardus, to assess his career.

Len Hutton was the only batsman of his period to whom we could apply the term Old Master, referring in his case not to his number of years but to the style and vintage of his cricket. He followed in the succession of the classic professional batsmen who each went in first for his county and for England: Shrewsbury, Hayward, Hobbs and Sutcliffe – though Sutcliffe wore his classicism with a subtly Sutcliffian difference.

As Old Masters go, Hutton was young enough; the sadness is that physical disability put an end to his career in its prime. He had all the classic points of style when, not much more than 19, he came to Lord’s in 1936 and scored 55. I then wrote of him in this strain of Cassandrian prophecy: “Here is a young cricketer who is already old in the head and destined to enliven many a Lancashire and Yorkshire match of the future.”

If by means of some time-machine capable of television we could today see a picture of Hutton batting 20 years ago, and one taken of him during his maturity, we would notice no fundamental difference in technique. We would see that his cricket had grown in experience and finish, that is all. Like the music of Bach, Hutton’s batsmanship in its evolution from an early to a late period presented no marked divisions; it was never raw, unprincipled or embryonic. He batted grammatically from the start, choosing his strokes as carefully as a professor of logic his words.

Even when he first played for Yorkshire, beginning with 0, he seemed to begin an innings to a plan, building the shape and the duration of it to a blueprint in his mind, and to timetable. But once in the greenest of his salad days he fell into error. He opened a Yorkshire innings on Saturday at Bradford with Arthur Mitchell, dourest and most unsmiling of the clan. After a characteristically Yorkshire investigation of the state of the wicket, the state of the opposition bowling, the state of mind the umpires were in, the state of the weather and barometer, and probably the state of the Bank of England itself, Mitchell and Hutton began to score now and then.

Young Hutton was feeling in form, so after he had played himself in he decided to cut a rising ball outside the off-stump. Remember that he was fresh to the Yorkshire scene and policies. He actually lay back and cut hard and swiftly, with cavalier flourish. He cut under the ball by an inch, and it sped bang into the wicketkeeper’s gloves. And Mitchell, from the other end of the pitch, looked hard at Hutton and said, “That’s no ****** use!” This was probably Hutton’s true baptism, cleansing him of all vanity and lusts for insubstantial pageantry and temporal glory. 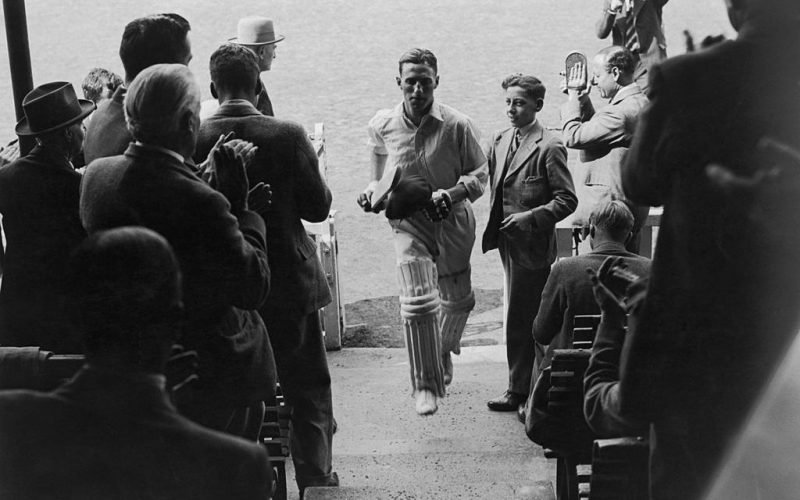 He observed the classical unities; that is to say, he did not venture beyond reliable and established limitations of batsmanship learned in the traditional school. Geometrical precision in the application of bat to ball, each movement of the feet considered until the right position was found almost instinctively, not bringing him merely to the ball and, as far as possible and if necessary over it, but also with body at the proper balance.

Never, or hardly ever, did Hutton play a thoughtless innings; his mind usually seemed to move a fraction of time in advance of his most rapid footwork and sudden tensions of limb, sinew and nerve. It is, of course, wrong to suppose that Hutton was at any time a batsman slow in his mental and physical reactions at the crease.

In the most austerely defensive Hutton innings we could feel a mental alertness; purpose in him suffered no weariness

The scoreboard may have told us that he was not getting runs feverishly, but the vigilance of Hutton was eternal; the concentration in him was so intense that it frequently exhausted his not robust physique much sooner than did the more obvious toil and burden of the day. In the most austerely defensive Hutton innings we could feel a mental alertness; purpose in him suffered no weariness.

And whether or not he was putting into practice his wide repertoire of strokes, he was the stylist always; rarely was he discovered in an awkward position at the crease, rarely was he bustled or hurried. Once at Kennington Oval, Lindwall knocked Hutton’s cap off in a Test match. Such an outrage could be equalled in a cricketer’s imagination only by supposing that Alfred Mynn’s tall hat was ever likewise rudely removed.

On a bowler’s wicket, when the ball’s spin was angular and waspish in turn, he could maintain his premeditated technical responses, often using a dead bat, the handle held so loosely that when the ball came into contact with the blade’s middle it was as though against a drugged cushion: the spin was anaesthetised into harmlessness.

But Hutton was, when grace descended upon him, a versatile and handsome stroke player. Old Trafford will remember that in 1948 he made a century of a brilliance which, in the circumstances – Bank Holiday and a Lancashire v Yorkshire match – was almost pagan.

He drove Lindwall with Spooneresque charm and panache at Brisbane in December 1950; at Lord’s in the Test match of 1953, he played one of the most regal and most highly pedigreed innings ever seen in an England and Australia Test match on the hallowed ground. And he has contributed to a festival at Scarborough.

His very greatness consists in how fully he can sum up the technique of his day as he finds it, and how representative he is of his day’s spirit

If Hutton had lived and played in the Lord Hawke epoch, when even Test cricketers in England had somehow to adapt themselves and their skill to matches limited to three days, he would have been a different batsman in his tempo and mental approach. But he could not possibly have been greater.

Any artist or master of craft is an organism in an environment; he is very much what circumstances and atmosphere make of him. His very greatness consists in how fully he can sum up the technique of his day as he finds it, and how representative he is of his day’s spirit. MacLaren, lordly and opulent at the crease, was a representative man and cricketer in a lordly opulent period; Hutton’s cricket has been as true as MacLaren’s to the Zeitgeist, to the feeling, temper and even to the economy of the age which shaped his character and his skill, both conceived as much as in integrity as in joy. 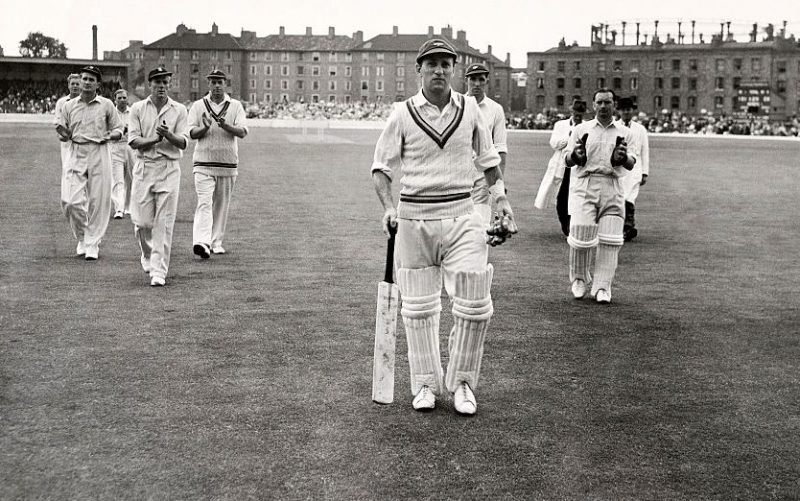 Len Hutton is applauded by his opponents Surrey as walks back after getting to his 100th first-class century at The Oval, circa 1951

As a captain he was shrewd but courteous; he knew the game’s finest points, and though never likely to give anything away, was too proud to take anything not his due. Sometimes he may have allowed thoughtfulness to turn to worry; but this is a natural habit if the part of the world which Hutton comes from.

Hutton certainly showed that a professional cricketer can wear the robes of leadership in the field of play with dignity. At first, no doubt, he appeared at the head of his troops not wearing anything like a Caesarian toga, but rather the uniform of a sergeant-major. But he moved up in rank and prestige until he became worthy of his command and defeated Australia twice in successive rubbers, wresting one from the enemy at the pinch and looting the other after a series of Tests which were, if I may be free with my allusions and metaphors, the Australians’ Austerlitz.

Related Story: Cyril Washbrook: One half of a dynamic opening pair – Almanack

One of Hutton’s most winning characteristics – and his personality is extremely attractive – is his smile, a smile with a twinkle in it. He had many occasions in his distinguished career on which to indulge this smile, many provocations to it, and he never missed the joke. A Yorkshireman has his own idea of humour, and Hutton, as great or famous as any Yorkshireman contemporary with him, relished his laugh all the more because very often it came last.