Lewis Hamilton might be the heavy favourite after breaking Michael Schumacher’s record for the most Formula One wins, but cricket fans will be hoping Stuart Broad can follow Ben Stokes in becoming a rare Sports Personality of the Year (SPOTY) winner from our favourite bat and ball game.

England’s second-leading wicket taker, who passed 500 Test wickets this summer, has presumably mostly been nominated for taking 38 wickets at 14.76 in 2020, but even if you remove his bowling from the equation entirely, he’s done plenty for sport this year. Here are just 10 reasons he deserves to win the treasured gong.

Finding an entirely new way to get out

He started the year strong, did Broad. January had barely begun and he’d already broken new ground, somehow getting his bat getting stuck fully behind his pad on his way to being yorked by Kagiso Rabada. “I haven’t seen it before” said a bemused Shaun Pollock on commentary as Kevin Pietersen chuckled in the background.

Giving one of the angriest TV interviews you’ll see

“To say I’m disappointed would be an understatement. You get disappointed if you drop your phone and break the screen,” Broad, who had almost certainly recently dropped his phone and broken the screen, told Sky Sports before the third day’s play of the first home Test he had missed since 2012. “I’ve been frustrated, angry, gutted. Because it’s quite a hard decision to understand, I’ve probably bowled the best I’ve ever bowled in the last couple of years, I felt like it was my shirt.” Only Broad can be this box office when he’s not actually playing.

Subtly comparing himself to David Beckham

An interview with the Daily Mail continued along similar lines, though England’s current No.10 did find time to implicitly equate himself with England’s former No.7. “It’s not like I can move from Man United to LA Galaxy,” Broad explained. “If you are not playing for England, you are not playing for England.” Just for next time, Becks moved from Real Madrid to the MLS, but we get what you’re saying.

Enjoying a batting renaissance… by modelling himself on Shane Warne

As batting role models go, Shane Warne, the man who holds the record for the most runs without a Test hundred, is an odd one. But that was who Broad credited after smashing a 45-ball 62 against West Indies. Maverick.

Coaching the next generation of fast bowlers

Even with England engaged in a fierce battle for the Wisden Trophy, Broad found time to give young West Indies quick Keon Harding an impromptu coaching session on the outfield at Old Trafford. Of course, you can bet Broad knew exactly where the TV cameras where and exaggerated his movements just enough to catch their attention, but doesn’t that make you love him even more?

Coaching the next generation of celebrappealers

Stuart Broad looking on like a proud father after watching that Jofra Archer celebrappeal earlier in the day. #ENGvWI pic.twitter.com/Z2bQb3RvMI

Broad’s signature celebration has inspired a new generation of devotees. Fellow England quick Jofra Archer is a worthy heir to his thrown, and even having been left out of the team for the first Test, Broad could be seen watching on like a proud father, and whenever a bowler rejoices in an lbw dismissal before the umpire has raised their finger you can be sure Broad won’t be far behind offering an encouraging word.

Proving he’s still the master of his craft

In a stiffly competitive field, this might just be Stuart Broad’s greatest ever celebrappeal #ENGvWI pic.twitter.com/nY0qK1FPYM

With the competition as stiff as it ever has been, Broad showed why he’s still in another league when it comes to eager celebrations. His full-throated roar and fist pump before umpire Richard Kettleborough had actually given out Roston Chase might just be the pinnacle of the genre. This being Broad though, he’ll probably top it at some point during 2021. 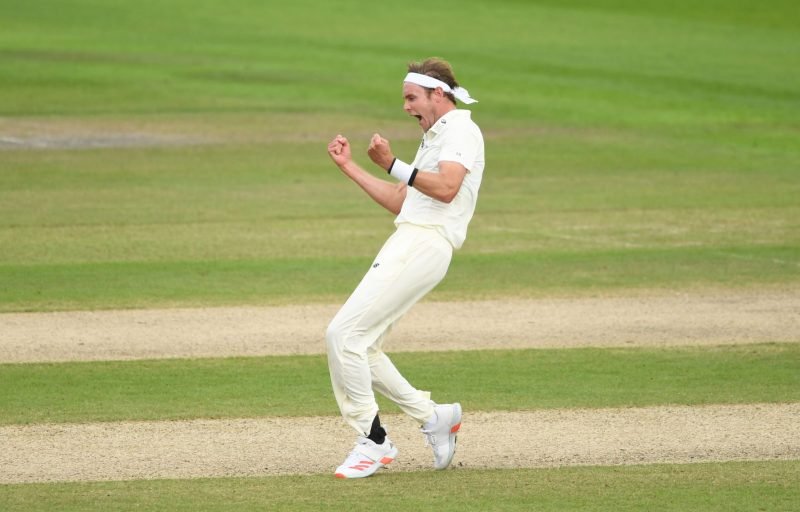 With lockdown putting an end to haircuts for a time, a newly floppy haired set of bowlers had to find a way of keeping the hair from their face. Plenty opted for a headband of some sort, but none did it quite like Broad, who sported a nifty tied number. No elastic needed for Broad. He’s proving the old-school methods are still the best, and looking a bit like a martial arts expert in the process.

To call it a drop barely does it justice. For starters, Broad didn’t actually get a hand to the chance that would have left James Anderson one wicket shy of 600 Test wickets. Instead, the ball hit him on the forearm. Anderson chuntered while Broad acted like he couldn’t see it, before eventually locating the ball and nailing the stumps with a direct hit, proving that his eyesight and coordination were fine after all. Anderson was “absolutely fuming” and England barely celebrated. Everyone else was in fits.

Getting fined by his dad

His dad’s a match referee, so it had to happen eventually, but Broad being put one demerit point away from a ban by his own father, and reacting in trademark style, was still great. Ever calculating, he timed putting himself in proximity to a ban perfectly too, with the oldest of his demerit points expiring after the next game he played. Textbook.