Harbhajan shared a link to the 26-minute video off his Twitter account today to his 10.4 million followers on the platform. According to the BBC, the video is “filled with medical misinformation about where the virus came from and how it is transmitted.”

The video makes a number of unsubstantiated and misleading claims such as suggesting that Covid-19 originated in a laboratory, that water contains “healing microbes” that combat the disease and that wearing masks and gloves can make people more sick. Facebook and YouTube have removed the video from their respective sites. 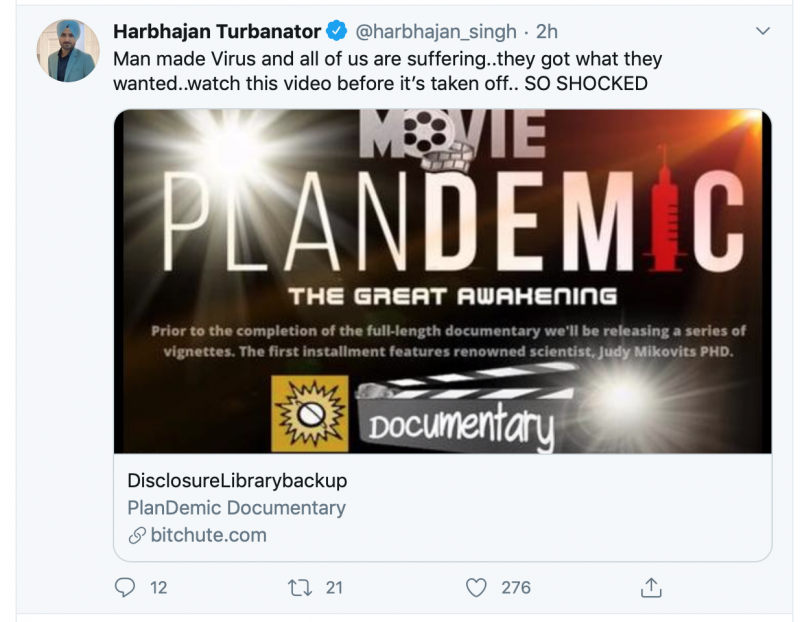 Harbhajan tweeted a link to the video, saying: “Man made Virus and all of us are suffering..they got what they wanted..watch this video before it’s taken off.. SO SHOCKED.”

A number of Twitter users condemned Harbhajan’s decision to share the video. One user, Nikhil Saraswat, wrote: “With respect, the ‘expert’ is a known fraud, and there’s no way she can speak with authority on all the things she is speaking about. It is the equivalent of asking a football goalie to give cricket coaching because they wear gloves and there’s a ball involved in both sports.”