Joel Garner, affectionately known as ‘Big Bird’, remembers putting the fear of God into batsmen during his legendary cricketing career.

I played against Lawrence Rowe in the late 1970s and I bowled at him for an hour and a half. I couldn’t get him out but he couldn’t hit it off the square and couldn’t score any. At the end of the day, Charlie Griffith walked into the dressing room and said: “Boy, you’ve just wasted a whole hour and a half. This game could have been over today and now you’ve got to come back tomorrow.” I said that I had tried and he said, “I know you tried but you tried too hard. What you should’ve done is bowl a straight ball!” The next morning I bowled an in-swinger, an out-swinger and then a straight ball: he was out caught bat-pad. Charlie just looked at me as if to say, “I told you so.”

I took so many wickets at Littleborough! It was just as I was starting and I was on a funny contract. We played Saturdays and Sundays and what happened was, if you got five wickets for fewer than 30 you got a collection and if you scored 50 you got a collection – we lived off the collections. Every Saturday you played you were like a mercenary – you’d turn up, do your bit and have some fun.

My debut was special and it was at home which made it extra special. I wasn’t too nervous – if you knew me and had seen me play cricket that would have been clear. There were injuries to Michael Holding and Wayne Daniel and Colin Croft and I were the natural replacements. I came on to bowl first change after Vanburn Holder pulled up in the third over and I got the first wicket. Ironically, it was Colin who took the catch. We started our Test careers together.

Our plan was very much to keep it tight and wait for the batsmen to make mistakes. In ODI cricket you don’t always have to bowl to get wickets, you can get wickets by keeping the game as tight as possible and that’s exactly what happened. We kept putting the batsmen under more pressure, more pressure, more pressure. When we got rid of Brearley and Boycott all the other fellas came out and had to push the game on so all I had to do was basically bowl straight at the stumps.

This was not one of our more productive tours! We played good cricket and continued to play the kind of cricket we were used to. What we found challenging was the umpiring decisions; Australia sent a film crew over to New Zealand to see what was happening – they spent three hours filming, said they understood what was going on and left! It was a tour we were glad to get behind us. The umpires did get to me a bit: it’s the first time I ever had a headache, the first and last time, believe it or not. The pressure was building. I think 10 minutes after we lost the game I had a splitting headache that lasted until four o’clock in the morning and it’s never happened since.

I had great times at Somerset. The money was incidental: we had fun. I remember playing against Sylvester Clarke at Bath and he bowled two bouncers at me. I said, “Boy, you’re not going to get me out. This game’s going to finish and there’ll be other games when I’m bowling to you. Don’t you bowl these bouncers at me.” He came off and Roger Knight came on and I told him that if Sylvester Clarke couldn’t get me out then he wasn’t going to get me out either. I hit him for three sixes over long-on and we won the game. This was a one-day game in the middle of a four-day match – so we had two days left of the four-day match when this had finished. Sylvester was expecting and waiting for a bouncer. It never came. Later in the year, we had a return game at Surrey. I knew Sylvester had forgotten. I said to Sam Cook, the umpire, “watch this”, and I bowled a slower-ball bouncer and he gloved it behind. He stood and waited for the decision and Sam just said to him, “What are you waiting for?” That’s how we played.

The thing is, we used to have so much fun playing against each other. When I was facing one of my boys – and vice versa, I’m sure – I knew them so well that I knew exactly when they were going to bowl a bouncer. I was playing for Somerset, facing Malcolm Marshall’s Hampshire at Bournemouth, and I could see him running in. I thought ‘You idiot, you’re going to bowl a bouncer’. I managed to get a single and I met him down the other end and said “I can’t hit you but I can hit the guy at the other end so I’m going to give it a bit!” Trevor Jesty was bowling at the other end and I got to 40 in no time. Malcolm couldn’t believe it; he said “Are you serious man?” I just said “The next man can’t bowl as fast as you so he’s going to get hit!” We had a lot of fun. 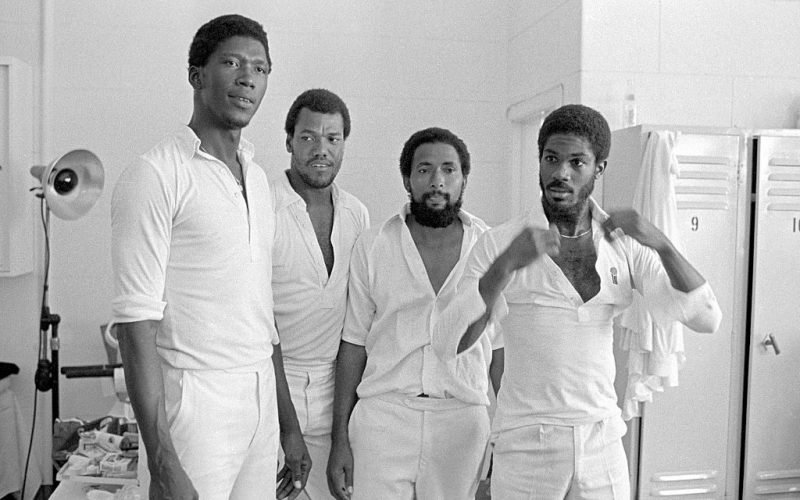 This was one of the highlights of my Test career. We went to Australia and we didn’t carry the trophy with us, we forgot it. Australia were leading the Test series after they won the first match and drew the second. We were playing the third Test and it was in danger of getting embarrassing. They batted for all of the fourth day and got to about 300-2 and we said: “Hey, we can’t go through this embarrassment. We’ve got to get some men. We’ve got to get some wickets.” We then bowled them out in a session, chased it down, won the match and retained the trophy by virtue of drawing the series. That was one of the better times, having to come from behind to win to save face.

I wasn’t too uncomfortable retiring, I’d bowled a lot of overs, had a few operations and I knew my body couldn’t take it any longer. I have no complaints about playing cricket, none whatsoever: if I had to do it again, I’d do it all over again. The rest of the West Indies boys and I still have fun as a group. Up until two years ago we used to come together for a weekend in October. We’d go to an island, spend a weekend together and just do nothing. There would be 12-14 of us, the whole lot. It’s something we should do again, get the fellas back together.

“Whenever you’re bowling, I’m going to be bowling as well”

It’s hard to pinpoint career highlights, some of the best moments were about team success and some were more individual. I remember one moment very clearly, though, and it shows how tight we were as a unit. In 1984 we were playing at Leeds when I heard that at home in Barbados my uncle had been killed. We had started the Test the day before, on the Thursday, and I said to Malcolm [Marshall]: “I’ve got to be out of here by Tuesday”. It was Friday and the Test was only a day old. He said “No problem. Whenever you’re bowling, I’m going to be bowling as well.” He got seven wickets in the game and I only got four but I didn’t put the ball down because the two of us had decided we were going to bowl together so that I could go home. That’s one of the things that I remember very, very vividly.