Ollie Pope talks about his love for dogs, sports and his eagerness to step onto the field again with Tanya Aldred in the fifth issue of the Pinch Hitter.

Filing through the cricketing memories of last winter is a haphazard business; nothing really had time to settle before the pandemic interrupted. But one shot still lingers, from Ollie Pope at the second Test at Newlands. Kagiso Rabada chassised in and Pope started ducking until, at the very last moment, with his body bent backwards like a man about to brush a hippo’s upper molars, he suddenly angled his bat and ramped the ball over the helpless wicketkeeper’s head and down to the boundary. It was preternatural in its instinctiveness.

Just over a week later he purred to his maiden Test century at Port Elizabeth, unwrapping more of the same heady mixture of invention and textbook orthodoxy. A hiccup past his 22nd birthday, Pope was in good company – of Englishmen, only Peter May, Len Hutton, Alastair Cook, Denis Compton, Jack Hearne, David Gower and Colin Cowdrey were younger.

But then the world stopped. England were sent home from Sri Lanka and cricket disappeared into a rabbit hole of re-runs and circling anxieties about bio-secure stadiums. Instead of starting the summer on April 19 with a Championship game against Somerset, Pope hunkered down in Haslemere, a lovely country town in the Surrey countryside, with his parents and their two fox-red Labradors, Dexter and Bracken.

He walked the dogs and trained and walked the dogs and enjoyed the extended time with his family. And the dogs. “I love my dogs, but because I’m away so much I don’t see them as much as I can so it was the best thing. I always save the seat next to me on the sofa so they can come and join me in the evening.”

But now he’s back in his flat in London and due at The Oval on Monday as part of England’s phased return of its squad of 55 – the bowlers started back a couple of weeks ago. It won’t be a huge surprise to learn he’s itching to pick up a bat again.

“It’s not easy, especially when you know there are all these things in summer that you could be doing,” he says, his black baseball cap on back to front, unfailingly polite over the awkwardness of a FaceTime call. “Obviously I do my exercise every day, which takes up an hour or two, then make some lunch, then hopefully meet a friend if they’re available and go on one of those socially distanced walks, then suddenly before you know it the day has gone.

“The cooking takes me longer than it should so that’s another activity to do in the evening. I’ve learnt some new things. I made a chicken and leek pie, and I started a new thing called mindful chef last week, but I cancelled that straight away because it was too tough, so the nutritionist sent me through five recipes for this week – though I did get a Deliveroo last night.”

Perhaps though, despite his youth, Pope is better placed than many to cope with the enforced time on the sidelines. Early last summer he dislocated his shoulder while fielding and was out for three months. Despite already having two Tests under his belt, he spent his enforced lay-off working on his technique, deciding with his coaches to make a basic change, to move over in the crease and stand on middle and off rather than middle to avoid getting out on fifth stump. This time around he finds himself in the happy position of feeling content with his game. 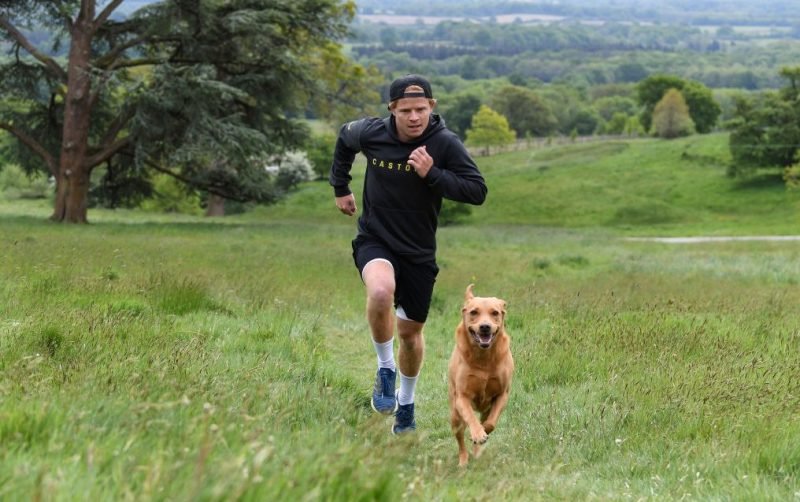 Ollie Pope, hunkering down in Haslemere, the the Surrey countryside

“Strangely enough, I’m not fazed about going back. To be completely honest, in an ideal world I’d like to just go back to how I was playing, I think the South Africa series was probably the best I’ve ever felt in terms of technique and mindset.

“It was amazing to be part of an away series win, and nice to help contribute, it is what I’ve dreamt of since I was a young kid. Obviously I got my first go against India but didn’t make much of a mark at all. I only had three innings but I didn’t get past 28, so for that year and a half it was hanging over me a bit: am I going to be one of those players who plays a couple of Tests but doesn’t really kick on? Obviously as a youngster you shouldn’t be thinking like that but I think it’s only natural. New Zealand was a great starting point, getting my first 50, and being able to kick on and find a bit of consistency in those three Tests in South Africa was a great feeling.”

But has it ever crossed his mind that he’s lost two summers at the height of his powers? 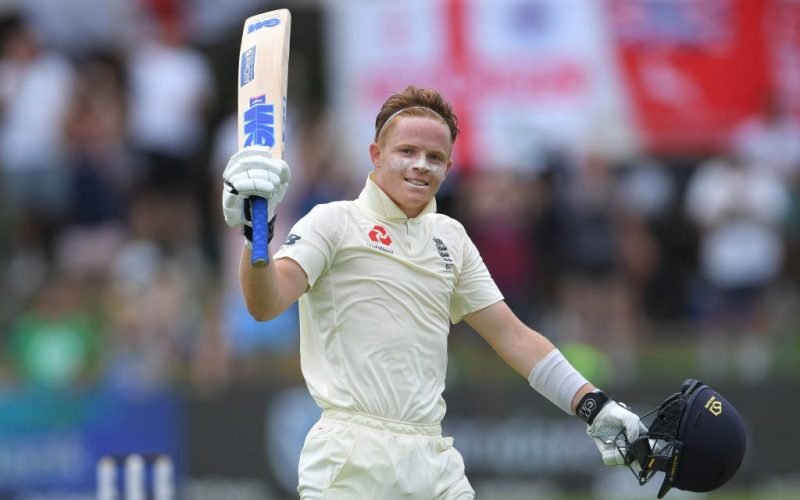 After a quiet start to his Test career, Ollie Pope announced himself with two fifties and a hundred in South Africa

“No, I think if anything it’s just making sure you’ve got that hunger when you come back. I remember last time, the first four-day game I came back for against Hampshire at The Oval, I just knew if I got myself in I was going to get a really big score [reader, he made 221] and I think a lot of players are going to feel the same.

“I played golf with Scott Borthwick yesterday and we were chatting about exactly the same thing, these breaks make you realise how much you need cricket in your life and how much you love playing and how much you love what goes on in the changing room and everything that comes with the life of being a professional cricketer. A county season can feel a long slog sometimes, especially if it is an uphill battle at points, so I think if anything this period is going to help people get that fire back in their belly.”

For someone who has slipped so easily, and so young, from county to international cricket, it is perhaps a surprise that he wasn’t always the very best. Although a fixture in the Surrey age group side, he was a “wicketkeeper who could make the odd contribution with the bat”. It wasn’t until he was 16 that he grew stronger and was able to hit the ball in front of square.

Even then he was plucked into the Surrey first team before making a hundred for Surrey 2nd XI: sooner than even he expected. He had given himself a year after A levels to get a contract but was signed almost straight away. Not that he’d put much thought to anything else, a sports mad boy who wanted to be a professional in whichever sport was in season, “To be honest there is not a lot between my ears but sport comes fairly naturally.”

There must have been other things he enjoyed as a kid? “Honestly? I don’t think there was really. That’s still my main thing to work on. I’m chatting with our psychologist at Surrey after this and our main subjects are, other than sport, what interests have I got? Then, it was to try and get my homework done and then go and play some sport. I’m trying to take some more photos now, I’ve got a camera, that’s an interest I’ve gained recently.”

He’s quite obviously level-headed, and manages to walk the difficult rope bridge of being confident in his ability without being cocky. He’s enjoyed the heightened praise that comes with both scoring runs and being a pleasure to watch, but he’s not getting carried away.

“There have been some nice things said and lots of comparisons made with Ian Bell, which is a massive compliment, but the most attractive player doesn’t always make the most runs. You look at Steve Smith: he’s not the most orthodox, he doesn’t hit the most perfect cover drive, but he’s got his method. I guess it is a nice thing if people say they enjoy watching me bat, but I don’t go into a net thinking, ‘Can I do the most perfect this or that?’ I go into the nets thinking I don’t want to get out and to try and hit the gaps if I can. I’m more than happy to look ugly and score runs if that’s what’s required.”

He seems to have managed to combine the best of the coaching book with the choose-your-own-adventure style of the IPL. “I’ve just tried to gain the foundations that work best for me. If you look at the best players in the world, without including Smith, you look at Joe Root and Kohli and Kane Williamson, those three guys have a really sound technique which helps them be successful. They play the ball late, they’ve got a really good defence and everything is just an extension of that. A cover drive is just an extension of a good solid defence and if ideally it does look good at the same time then, happy days.”

Pope is lucky in that he’s one of a cohort of young players who have blossomed and caught Ed Smith’s eye at about the same time. Sam Curran is one of his best friends, they’ve played cricket together since he was 14; Zak Crawley was a county opponent from 10; Dom Bess was a teammate with the England under 19s and Dom Sibley was at the Surrey academy at the same time. “It’s been amazing to have us all in the same changing room and at one point on the same pitch, but the older guys have been awesome as well, you find yourself trying to pick their brains as much as you can, watch how they go about their training and how they go about their business.”

That business has changed, maybe for a significant period. As cricket comes back it will be different, quieter certainly, perhaps more intense. Schedules may be stop-start, vulnerable to last minute changes. Pope, though, is characteristically phlegmatic.

“It’ll be very strange, it will feel like going back to club or school days when if you hit a boundary the only people you might hear are your teammates up on the balcony, and we’ll be able to hear everything the opposition say, so it will be interesting. But at the same time it is still Test cricket and you’re still playing for your place in the side, knowing there will be even more viewers on TV if anything. Without crowds as a distraction everything you do will be even clearer.

“It will be nice to have a drive and purpose again, we haven’t done our jobs at all since this lockdown. It’s going to be great to just pick up a bat and get back to a life that we know and a life that we live and have got used to living.”