A year-and-a-half on from leading India to the U19 World Cup final, the gifted Priyam Garg has his eyes set on greater glories. He narrates his story so far to Aadya Sharma.

When Priyam Garg reached his maiden IPL fifty against MS Dhoni’s Chennai Super Kings last year, the camera panned towards mentor VVS Laxman and captain David Warner in the Sunrisers Hyderabad dugout, beaming and applauding like proud parents. The 19-year-old had made an emphatic statement, cracking a half-century off just 23 balls, and it was then that a bigger audience was able to appreciate the hype around the talented youngster.

Just months before, Priyam – a stoic, measured face in a vibrant team – had led a band of youngsters to the final of the 2020 U19 World Cup. Maturity is perhaps Priyam’s biggest asset, one that has impressed everyone from Rahul Dravid to Warner, but off the field, his cheerful demeanour and boyish charm cut through the shield of seriousness. For his friends, family and fellow cricketers, he is truly Priyam (beloved).

Priyam has made a habit of staying ahead of his peers: at 15, he was facing Bhuvneshwar Kumar and Praveen Kumar in his academy nets; at 17, he was in contention to play in an Under-19 World Cup. Today, at 20, his first-class average stands at an impressive 66.69.

Among the stories of India’s near endless list of upcoming batting stars, Priyam’s tale stands out for where it began: he hails from Kila Parikshitgarh, a town with a population of 50,000 (New Delhi is 400 times bigger). As a simple, unsullied child whose first bat was his mother’s dhoka (wooden paddle for washing clothes), Priyam used to mimic Sachin Tendulkar’s straight drives, long before he knew what each stroke was called. A career as a professional cricketer didn’t appear too realistic a possibility.

“I come from a [small] town,” Priyam tells Wisden India. “No one suggests that you become a cricketer or participate in sports. The foremost thing is to study and get a job. That’s the mindset. It was the same for my family.”

His father, who used to deliver milk and newspapers to support the family, would reiterate: “You need to study. Only then can you succeed.”

One day, his uncle, looking to reprimand him for whiling away time, stood behind a tree and witnessed a young Priyam steer his gully cricket team to a win and decided to push him towards a more serious level of cricket. Despite his family’s financial constraints, Priyam’s mother instantly agreed to enrol the 11-year-old to a cricket academy 25 km away, but his father wasn’t so easily convinced. “How will he go to Meerut?” he asked. “What if he wanders off, or someone takes him?”

His mother played an instrumental role in getting past those early hurdles, managing to change the mind of a worried father. Priyam used to travel by bus every day, and his early signs of dedication caught the eye of his coach Sanjay Rastogi. Furthermore, the sudden void left by his mother’s demise brought out a sense of responsibility.

“The motivation increased after that,” says Priyam. “She was the reason, she wanted me to play the game, and as soon as possible. My entire family was behind me, but my mother’s support was different. When she passed away, even the little bit of fun or time wastage that I used to do, I stopped. The focus increased. I was determined – whatever happens from here on, I need to play.”

“When difficulties come your way, you start matching them [with your mindset],” he says. “You start understanding things quicker. When you don’t have any problems in life, you don’t understand things as well.”

The enhanced focus led to the rise of a gifted cricketer. The confidence developed significantly once he faced the swing of the two Kumars at the academy, but it wasn’t just the mental aspect that drove his progress. “Everyone used to say that I have God-gifted, natural talent,” Priyam recalls. He made it to the Uttar Pradesh U14 side aged just 11 and went on to lead their U16 side. The progression of a future leader was already taking place.

Success at age-level cricket meant that Priyam was in contention for the 2018 U19 World Cup squad by 17. But, despite featuring in tours and camps in the year-and-a-half preceding the event, he couldn’t make the final cut.

“When I didn’t get selected, I realised I had lost my focus somewhere,” Priyam recalls. “Some process was lacking, or my discipline had dwindled.” The numbers also dried up – he had only one double-digit score in his first six U19 ODI innings ahead of the World Cup. Perhaps he just wasn’t ready.

The advice of then India U19 coach Rahul Dravid resurrected his focus.

“During a meeting with the U19 probables, Rahul bhai said something very important: ‘All those who play the U19 World Cup don’t play for the country. When you started playing, your goal wasn’t India U19, it was India. Put your focus more on first-class cricket. When you do well in FC, you will get selected for India A. Do well there, and you will play for India. Don’t think that, if you didn’t get through to U19 WC, your career is over.’”

The words left a lasting imprint on Priyam, who decided to shift his energy towards the longer form. Having broken into the state U19 team at 15, his quick progress paved the way for a first-class debut at 17, and he made an emphatic statement with a hundred on debut. Just over a month later, he struck a double-century.

“I worked extremely hard and became more disciplined,” he recalls. “I got selected for Ranji [Trophy]. After that, I met Rahul sir again and he was extremely happy that what he said actually materialised”.

There’s a heavy influence of traditionalism in his batting: the drives flow out off the bat like a slingshot; the defence is neatly assembled; but most importantly, there’s steadiness and sensibility, probably rooting from his own balanced persona. Yet, there’s also a streak of eccentricity that comes out when required. Ask Sam Curran, who was swept like a spinner for a six over deep square-leg during Priyam’s onslaught against CSK. 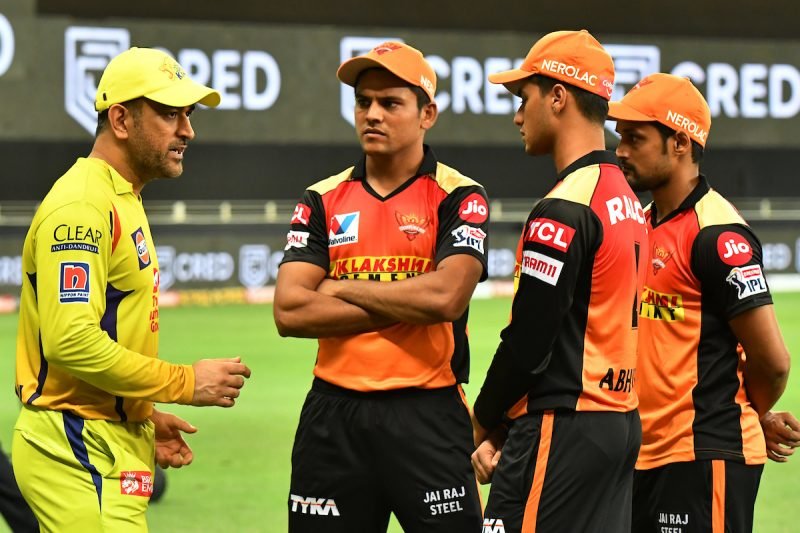 “He [Dhoni] reminded me my natural game is timing, so when we come to the IPL, we shouldn’t start copying other players”

Priyam feels T20 hitting comes naturally to him, and he keeps learning from the likes of Virat Kohli, Rohit Sharma, MS Dhoni and Suresh Raina to seamlessly switch between formats. “My game never changes,” he says. “Only the preparation is different: in T20s, you need to find gaps better, run quicker and practice certain shots like the loft over the covers.”

It reflects in his white-ball game too: in 27 List A matches, Priyam averages 43.17 and has already hit three centuries, striking the ball at 94.39.

During his debut IPL season, Priyam, always on the lookout for sound advice, was seen picking the brains of MS Dhoni after a match. “Abhishek [Sharma] and I went to him,” he recalls. “He [Dhoni] reminded me my natural game is timing, so when we come to the IPL, we shouldn’t start copying other players. Also, [he said] there will be ups and downs in life, but don’t get bogged down. Sometimes, in games, you will come across scenarios where you will think, ‘Okay, we can’t do this’, but you still need to find ways to give your best and never give up.”

At Sunrisers, Priyam is being nurtured by a stellar support cast, including a host of international superstars. Warner treats him like a “younger brother” while Williamson has taught him the essence of time. Closer to home, Priyam loves spending time with Manish Pandey and Bhuvneshwar Kumar. There are plenty of cricketing experiences to share, but the stress of bio-bubbles has necessitated the seniors to introduce Priyam to the wonderful world of PlayStation. “You should find time for this too!” Bhuvneshwar often tells Priyam, helping him switch his mind off cricket.

When asked about his (virtual) game, Priyam bursts into sheepish laughter. “I tried a bit, but I just couldn’t understand. I play FIFA, but… (signals finger movement on controller and shakes head)”.

A diligent student of the game, Priyam has made rapid progress at 20, but never wants to change who he really is. After landing the U19 captaincy and an IPL contract, public attention around him has changed, but he’s made it a point to not modify his personality. The family joyously celebrates each milestone, but Priyam knows that bigger celebrations can wait.

“I’ve always expected [milestones] from myself, and I never treat them as if something extraordinary has happened, because that’s my goal. Whatever hard work I’m doing it’s for this: to play IPL, to play for India and for a lot of years.”

Bigger challenges await Priyam, and he’s ready for them. “I always dreamt of facing Jasprit Bumrah,” he says with childish enthusiasm, “but it didn’t happen in the IPL. I got to face Bhuvneshwar in the nets; my other choice was Bumrah… hopefully, it happens in this IPL.”

“I have been playing domestic for the last three seasons, and everything is going well,” says Priyam, who is now the T20 captain of his state Uttar Pradesh. “Now I am just waiting for the India call-up.

“The feeling when you wear the blue India jersey… I can’t tell you. It’s a completely different feeling”, he says with emotion. You can almost feel the pride.

From a carefree youngster in a sleepy town to a stone-faced warrior batting with the greats, Priyam has been at the centre of a remarkable story. Along the way, the advice of his idols has taught him to never rest on his laurels. If his composure and skills continue to click together the same way, there’s no stopping him from realising the rest of his dreams.