India are the most successful team in the Under-19 Cricket World Cup, having won the trophy four times. With the 13th edition of the tournament coming up imminently, a new generation of youngsters are gearing up to defend the title that their predecessors won in 2018. They are India’s future stars, a part of the 15-member contingent for the tournament, starting on January 17 in Kimberley, South Africa.

“He is way beyond his years.” Those were the words of Uttar Pradesh captain Akshdeep Nath, after Garg had scored a solid 88 against Services in a Ranji Trophy game in November 2018. The 19-year-old, who earned his maiden Ranji cap against Goa in the 2018-19 season, plundered a century on debut. Since then, he’s made 867 runs from 12 first-class games, including a double-century against Tripura in December 2018, and 539 runs from 15 List A outings.

Having lost his mother when he was 11, Garg, who is one of five siblings, credits his father for nurturing his cricketing dream. His father, he told Indian Express, took on odd jobs so Garg could hone his skills. His hard work and maturity almost took him to the World Cup squad in 2018, but a poor run in the build-up to the tournament meant he had to wait. The wait might just be worth it.

Son of a war veteran, Dhruv Jurel would have been enrolled in the National Defence Academy, had his father not realised that his son had different ambitions. The sight of a batsman playing fluent strokes during a 60-day summer camp in his hometown of Agra was enough to make the teenager fall in love with the game.

A safe wicketkeeper, Jurel scored a match-winning 59* against Bangladesh in the final of the tri-nation competition in England in July-August. A month later, he led India U19 to the Asia Cup title in Sri Lanka. His smart captaincy helped India defend a paltry 106 against Bangladesh.

"Watching AB de Villiers' videos has helped me a lot. The best thing I like about him is his approach"

A free-flowing right-hander, Jurel seeks inspiration from one of the best to have graced the game. “I admire AB de Villiers,” he had told Times of India, after the Asia Cup triumph. “I saw him two years ago as a fan during an IPL match at the Green Park stadium … Watching his videos has helped me a lot.”

Yashasvi Jaiswal went from selling pani puri (a native Indian snack) for a few rupees on the streets of Mumbai to smashing a double-hundred in his first-ever List A tournament.

On India U19’s tour of Sri Lanka in August last year, he was dropped from the side after scores of 15 and 1, but returned to hit a century in the final and cement his spot in the team. During the 50-over Vijay Hazare Trophy in 2019/20, he aggregated 564 runs at 112.60. On October 16, the 17-year-old smashed 203 off 154 balls against Jharkhand to become the youngest player to hit a double-century in 50-over cricket.

Tilak Varma scored 5 and 34 while opening the batting for Hyderabad in a Ranji Trophy game last year, on debut, and hasn’t played a first-class game since. He made a mark in the shorter version, though, scoring a steady 65 on his List A debut last month. Three games later, he made a 59-ball 83 in a rain-shortened game against Andhra. He can be a handy off-spinner too. 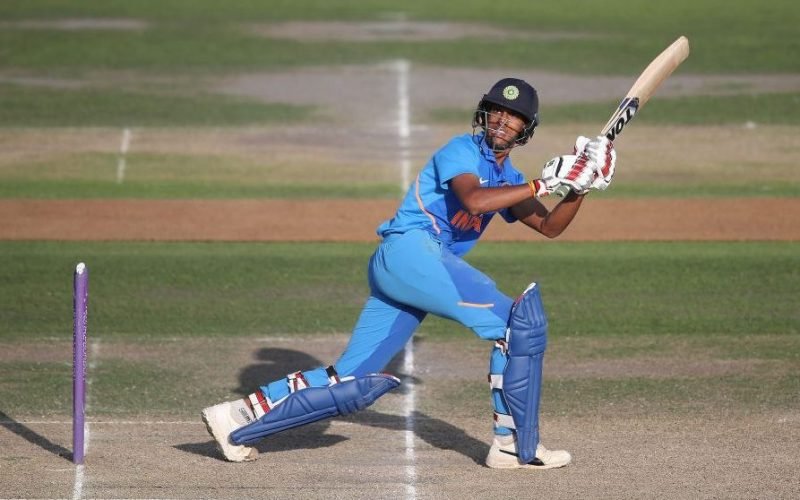 Another young talent from Mumbai, Divyaansh Saxena seized his first major opportunity, scoring a well-compiled 122 on first-class debut, on a challenging surface against South Africa U19 in February this year. He blossomed with the bat on the England tour too, finishing as the top run-scorer, with 321 runs from six innings. Saxena began the tour with an unbeaten 79 in the practice game, before adding a fifty and a century to his tally in the league stage, and topping it off with 55 in India’s win over Bangladesh in the final.

"I try to learn from every game. This is advice from Rahul Dravid sir"

A middle-order batsman and occasional right-arm medium pacer, the Uttarakhand cricketer hasn’t had the best of years so far, but has peaked at the right time. He scored a game-defining 53 in the second of five one-dayers against Afghanistan U19. In a low run-chase of 189, Rawat’s fluent knock included five fours and two sixes. 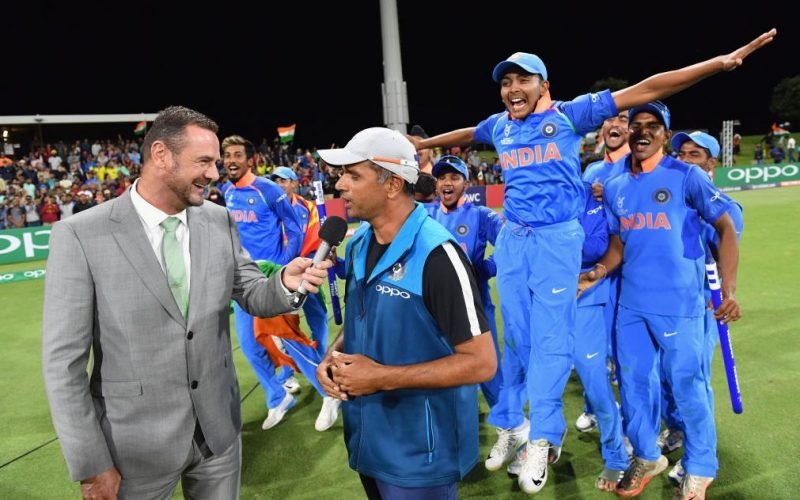 India have won four U19 World Cup titles, including in New Zealand in 2018

The 18-year old all-rounder from Noida caught the eye in the domestic U16 competition last year, when he aggregated 350 runs and took 11 wickets from five games. Against Haryana and Uttar Pradesh, he scored 103 and 91 respectively, taking three wickets on both occasions.

In the home series against Afghanistan U19, he played two games, scoring 10 in his lone opportunity with the bat. Joshi clocks mid-130s with his right-arm medium pace.

Shubhang Hegde led the U19 team in the one-dayers against Afghanistan, which the hosts won 3-2. Known for his left-arm spin, Hegde has shown promise with the bat too. In the third match against Afghanistan, he scored a patient 46 after his team had been reduced to 54-5.

"We have a very strong unit. It's just a matter of us playing well together"

He took only four wickets from eight games while playing for Belagavi Panthers in the Karnataka Premier League, the state’s domestic T20 tournament earlier this year, but his economy rate of 6.55 was among the best.

“It’s an opportunity to do as well as [the previous U19 Indian batches],” Hegde told Wisden after the squad announcement. “Because they’ve done so well, there are a lot of eyes on us. It’s a good feeling that everyone’s going to be watching us play.” 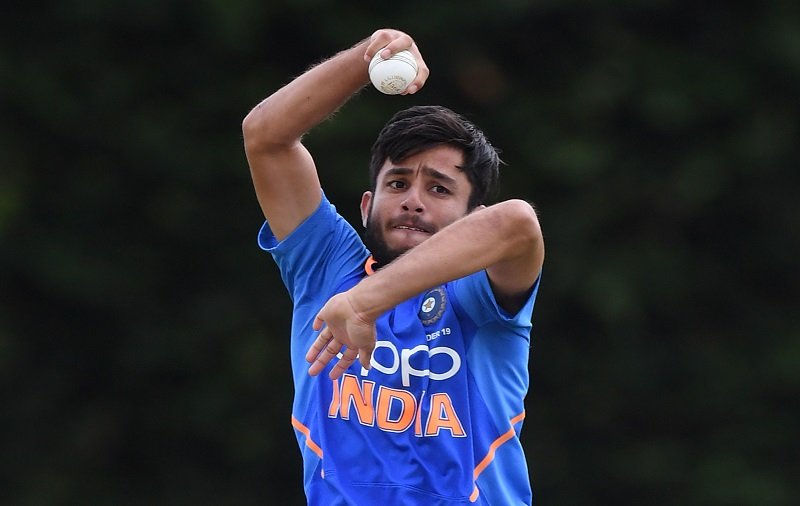 Persistence has paid off for Ravi Bishnoi

When he was not an automatic selection at the U16 level, Ravi Bishnoi was told by his father to quit the game. It was only through the efforts of his coaches that he stuck to the sport, and it’s paid off. The Rajasthan-born leg-spinner made his T20 debut for his state side in the 2018/19 Syed Mushtaq Ali Trophy. He had an instant impact: in his first game, against Tamil Nadu, he had 2-20 from four overs. He made his List A debut in September this year, during the Vijay Hazare Trophy, and was subsequently named in the India A squad for the Deodhar Trophy the following month.

He has 14 wickets from 12 white-ball appearances with an impressive combined economy rate of 5.89. With time, he’s also evolved as a useful lower-order batsman.

Akash Singh is an exciting 17-year-old left-arm fast bowler, whose action has a slight resemblance to that of Trent Boult. He possesses genuine pace, a great short ball, and an accurate inswinging yorker.

In the U19 Asia Cup final, he took 3-12 from five overs with the new ball, as India U19 defended 106 against Bangladesh. He made his T20 debut for Rajasthan in November and returned 2-26 from four overs. 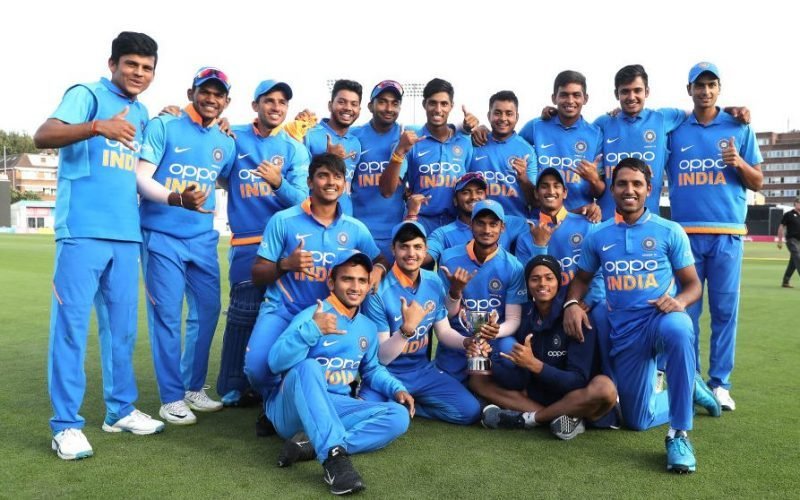 In his short List A career, Sushant Mishra has been synonymous with consistency, picking up 19 wickets from just eight games, at an average of 15.10. Eleven of those wickets came from five games in the England tri-series, giving him the second-highest tally in the competition. He carried that form into the Youth Asia Cup, finishing with nine scalps from three games, including a fifer against Afghanistan.

Having started playing at the district level at 12, he joined the National Cricket Academy in Bengaluru four years later. In his U16 days, he knocked over Suresh Raina with his second ball during a Chennai Super Kings practice session in IPL 2015. A fan of Zaheer Khan in his early days, his current role model is Jasprit Bumrah. 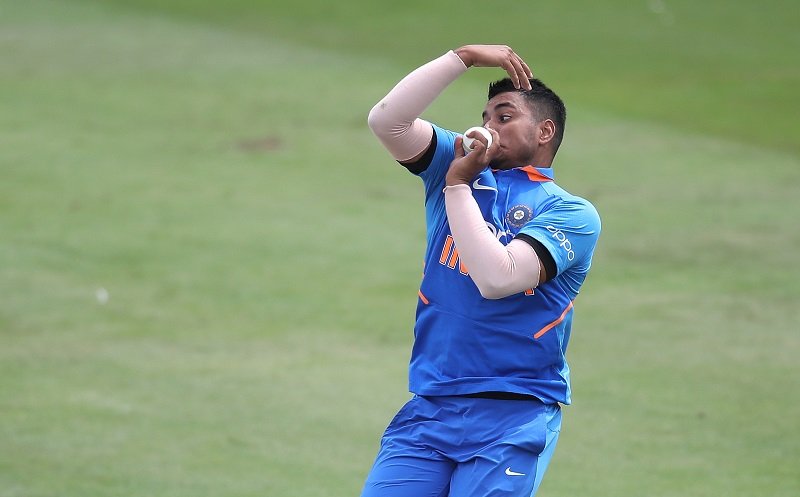 Kartik Tyagi, who hails from the small village of Hapur in Uttar Pradesh, made his Ranji Trophy debut back in October 2017. The right-arm pacer can bowl at 140kph.

His 41 wickets from eight matches in the 2018-19 Cooch Behar Trophy, the U19 age-group tournament, is a highlight of his young career. He was India’s second-highest wicket-taker in England, after Mishra, with nine scalps from five games. He took six wickets from three games in the Afghanistan series, including 3-24 in the third one-dayer.

Atharva Ankolekar had been encouraged to play cricket by his father, who passed away when he was just 10. Raised by a single mother who is a bus conductor in Mumbai, the talented left-arm spinner pursued his dream.

Ankolekar was behind Bangladesh’s collapse in the Youth Asia Cup final, where he ran through the middle order and the tail to finish with 5-28. The performance came after his 4-16 and 3-36 against Afghanistan and Pakistan respectively, which ensured that he led the wicket-taking charts, with 12 scalps from three games. He also finished the competition with an economy rate of 2.96.

Defending Champions India U19 hold their nerve and seal a thrilling 5 run win over Bangladesh in U19 Asia Cup final. We are proud of you boys! ✌✌ pic.twitter.com/Lo6j32Cfte

‘Wicketkeeper from Jharkhand’ reminds us of a certain World Cup-winning captain. Kumar Kushagra is of the same ilk as MS Dhoni, and Ishan Kishan, who led India U19 in the 2016 tournament, where they finished as runners-up.

Kushagra led Ranchi during his U16 days, having earlier represented the Bokaro district team at the U14 level. He is likely to be India’s second-choice wicketkeeper after Jurel. As an opener, he showed solidity in low-scoring encounters against Afghanistan U19 in Lucknow.

Vidyadhar Patil completes India’s young and exciting fast-bowling group. He was a part of the winning Hubli Tigers team in the Karnataka Premier League, where he took up death-bowling responsibilities.

The Raichur-born medium pacer believes his experience in the England tri-series, where he took four wickets from as many games, helped him prepare for greater challenges. “I had dreamt of this for a long time; it feels very good,” he told Sportstar after his selection to the World Cup squad. “I was nervous before going to England. I didn’t know how things would turn out. But now I have that experience with me.”