CricViz analyst Ben Jones looks at the plans teams should look to employ with bat and ball if they are to stop defending IPL champions Mumbai Indians from adding another title to their collection.

Mumbai Indians are a T20 colossus. Three of the last four IPLs are safely tucked in their trophy cabinet – as well as those for 2013 and 2015 – and they are heavy favourites to add another over the coming months.

And yet, even in this almost unprecedented streak – CSK in 2010 and 2011 are the only other side to retain the IPL title – Mumbai have always had slip ups. They have lost eight matches in real-time over the last two seasons; in a very literal sense, they are not unbeatable. Compare their dominance with that of the world’s other leading T20 side – Trinbago Knight Riders, who won all 12 games in the most recent CPL season – and Mumbai’s record is more about structural excellence, key decisions being nailed at every opportunity for the last decade, that ensure they will triumph over a full season. While their side has always contained plenty of the best players around, their success has never relied solely on individuals having outstanding campaigns.

As such, building a plan to take them down is not a case of targeting individuals and hoping the castle crumbles. It’s about building a coherent strategy which considers how every piece fits into Rohit Sharma’s puzzle. So let’s try.

How to beat Mumbai Indians with the ball

Back your spinners early

In the last few seasons, Rohit Sharma and Quinton de Kock have been less effective against spin than against pace. While Rohit has had issues against the very quickest bowlers – he has averaged 15 against high pace in the last two seasons – as a broader pattern, it’s been spin (particularly leg-spin and off-spin) which has caused Mumbai’s opening pair the most bother. 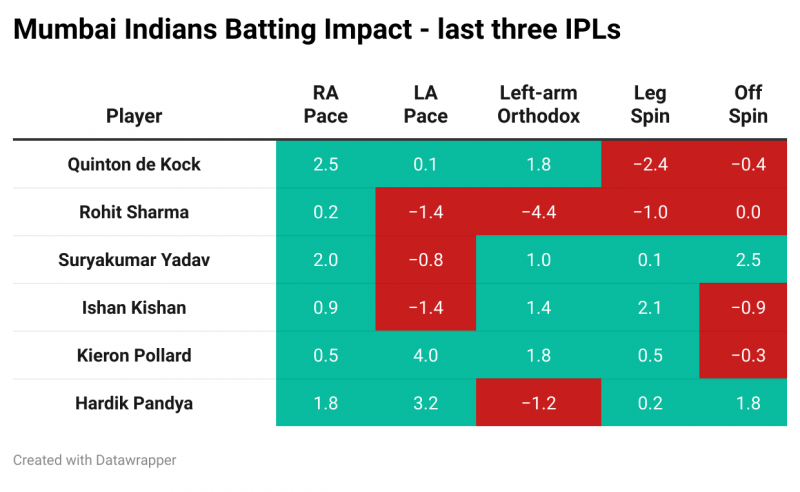 CricViz: Both Mumbai Indians openers have struggled against leg- and off-spin

Counter-intuitively, de Kock has still found it difficult against leg-spin, surprisingly given the match-up and his ability slog sweeping. Similarly, Rohit’s neutral Batting Impact against off-spin suggests that the more important call with these two at the crease is not which way is the ball spinning, but making sure it’s spinning in the first place.

As such, attacking with spin early is a clear route to hurting Mumbai. An early leg-spin wicket may see Rohit call Ishan Kishan to the crease, to counter the ball turning in, but if not then it exposes Suryakumar Yadav to a bowling type he’s comparatively poor against; with off-spin, vice versa.

In the last two seasons, Mumbai Indians have scored at 11.6rpo in the death overs – no side has scored quicker. The key to their excellence in this phase is the duo of Kieron Pollard and Hardik Pandya, two of the best T20 hitters with which the game has been blessed. Their record across the past two tournaments (Hardik: 516 runs from 262 death deliveries; Pollard: 406 from 200) is a terrifying thing. En route to victory against Mumbai, these two are enormous obstacles.

Now, with players of this quality there is no easy way to limit them. However, like any batsmen, they have their strong areas and for both of them slower balls get the treatment. In the last few IPL seasons, Hardik scores at 12.8rpo against slower ball variations (a strike rate of 214), while Pollard goes at 9.8rpo (a strike rate of 164). While many factors are at play, this is clearly a significant reason why Mumbai have dominated fierce rivals Chennai Super Kings, whose death bowlers are DJ Bravo and Deepak Chahar, who both liberally use slower balls.

Against Pollard and Hardik, you can’t rely on slower balls, and going for yorkers requires substantial trust in the execution of your bowlers. In order to contain these two, you have to adopt the more modern approach of hitting ‘hard’ lengths, ideally at pace. As you can see from their strike rate grids below, the only consistent zones where Pollard and Hardik struggle to score are back of a length, either very wide (risking offside wides) or very straight, into the body (risking legside wides).

CricViz: Hardik Pandya and Kieron Pollard have both struggled against short-ish balls

However, to exploit that weakness to its fullest, you need ball speed. That hard length, pitching 8-10m from the batsman’s stumps, is hittable at more pedestrian speeds (below 140kph, Pollard and Hardik score at 8.4rpo). When it rises to what can reasonably be called high pace, the scoring rate drops to just 5.9rpo. Short lengths at good speed into the body are the only method which consistently give seamers a chance against the two Mumbai finishers.

How to beat Mumbai Indians with the bat

Batting plans are harder to formulate than bowling plans, because they are by their very nature reactive. It’s all very well asking batsmen to go hard in the Powerplay, but if the ball’s flying past their ears or turning square past the bat, it’s irrelevant. Orders can be changed to encourage certain approaches, but it’s a trickier element of strategy.

An easy mantra when playing a side as successful as Mumbai, is to try and ‘chop the head off the snake’. In other words, take down the opposition’s biggest threat, and watch the rest of the side crumble. In batting terms against Mumbai, this would equate to taking on Jasprit Bumrah.

And yet, in the last few seasons, teams have shown you don’t need to beat Bumrah to beat Mumbai. More teams have beaten Mumbai with Bumrah performing well, than with him performing badly. 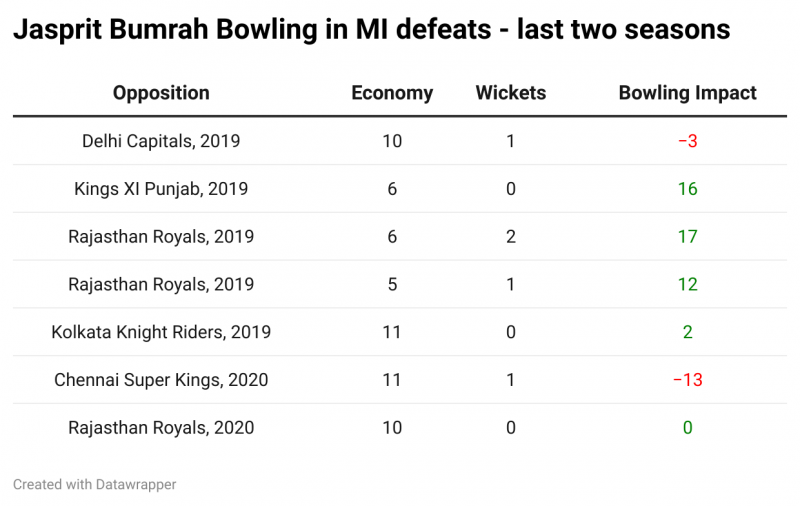 By contrast, Krunal Pandya has recorded a negative bowling impact in six of the eight losses he’s been involved with over the last two campaigns. For Rahul Chahar, it’s four of the six. In matches where both spinners have recorded negative impacts, Mumbai have just three wins from eight.

While this sort of analysis is not academically rigorous, and lacks predictive value, it does illustrate that you can navigate your way through the Mumbai bowling attack without having to beat Bumrah. You needn’t gamble by positioning your best players at the top and bottom of the order, but can instead prioritise elsewhere – namely, the middle overs.

The most obvious weak point in Mumbai’s bowling attack, and arguably their strategy in its entirety, is their spin attack, and thus their middle-overs bowling. Last season they ranked seventh among IPL sides for both economy and strike rate in overs 7-15, while ranking first for economy in every other phase, as well as for Powerplay strike rate. To an extent this is an acknowledgement that they are happy to dominate the top and tail of the innings while conceding ground through the middle, but it does show that this is when Mumbai are vulnerable with the ball. 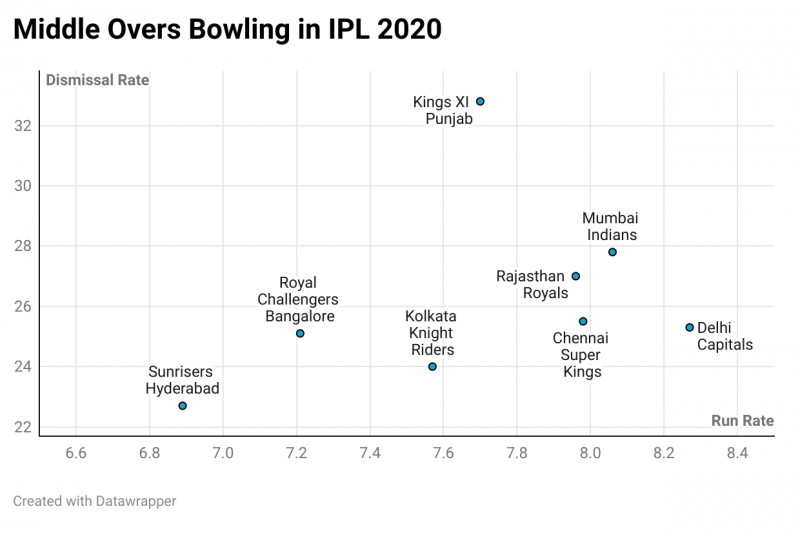 CricViz: Middle-overs bowling is a weakness for Mumbai Indians

In the last few years, Mumbai have generally used two spinners in a six-man attack. Krunal, the slow left-armer, alongside Chahar, the leg-spinner, has generally been their spin attack. Those two bowlers have delivered a combined 906 balls in the middle overs across the last two IPL seasons, more than every other Mumbai bowler combined. As we’ve already touched on, getting on top of them is an achievable and crucial means of taking Mumbai down.

While both are good bowlers, they are also both significantly less effective against left-handed batsmen. As such, selecting left-handers through the middle, preferably ones well suited to hitting spin, is a key opportunity to gain advantage. Last season, Ben Stokes – albeit as an opener – hit Chahar for 21 (11), and Krunal for 18 (10), gave a perfect example of this.

CricViz: The Mumbai Indians spin pair are stronger against right-handers than left-handers

The effect of taking the spinners down is that Rohit is then forced to turn to other options, none of whom are ideal. If it’s Bumrah, then it takes away an over he would otherwise be bowling at the death. Hardik or Pollard are both canny but neither is particularly destructive. Trent Boult is not particularly well suited to bowling in the phase.

As a means of countering the weakness of their spinners, Mumbai often pick Jayant Yadav – an off-spinner – against batting orders with plenty of left-handers, such as recent incarnations of Delhi Capitals. It’s a sensible match-up option, but he is an inferior bowler in terms of ability to the other spinners, his Average Bowling Impact in recent seasons comfortably below Chahar and Krunal’s. In this sense, luring Mumbai into picking Jayant ahead of Chahar is a win before a ball has even been bowled.

Everyone knows the importance of early wickets in T20. Take three wickets in the Powerplay, win 75 per cent of matches – easy game. In 2020, Trent Boult’s early breakthroughs were a key part of Mumbai’s success, the Kiwi taking 16 Powerplay wickets in 15 matches. That represented more than half of the champions’ new ball wickets in the competition.

However, his success was something of a surprise. Despite his excellence in other formats, Boult has never been a very effective new ball wicket taker in IPL cricket. Indeed, before moving to Mumbai for the 2020 season, he had taken just nine wickets in 33 Powerplays, managing a strike rate of just 44. No established Powerplay bowler had a worse strike rate than Boult in the previous five IPL seasons. His work at Mumbai so far is an anomaly, and it can be attributed to a number of factors.

It could be down to individual improvement, though six wickets in 11 Powerplays since the start of last year for New Zealand and Northern Districts doesn’t suggest that he has simply gone to another level. One more likely factor is that Mumbai have used him in a very clear role, and that’s benefited him significantly. Since joining Mumbai, Boult has been able to bowl much more in the Powerplay, with upwards of 63 per cent of his bowling done in this phase – in the IPL up to this point, it was 52 per cent. The quality that Mumbai possess elsewhere, and the stability of their method and plans, allows Boult to operate in his favoured role the vast majority of the time, and teams are ‘forced’ to attack him with Bumrah at the other end.

Like any well oiled machine, remove one Boult from its usual spot, and things go wrong. Going after Boult may seem risky given the number of wickets he collected last season, but the knock-on effects are obvious, and his long-term record is not good. Attacking him – forcing him out of the attack, and into his less favoured zones – is a risk very much worth taking.

Which teams are well placed to beat Mumbai Indians?

On the face of it, the teams best placed to target Mumbai are KKR (should they find a place for Lockie Ferguson and Pat Cummins in the same XI) and Delhi Capitals. Rajasthan Royals have notably had success against Mumbai in the last few seasons, despite struggling more broadly, but while they are set up to compete with the high pace and Powerplay spin, they have typically relied on huge individual performances to see them over the line rather than a clear gameplan.

Who has the tools to beat Mumbai Indians?

Yet of course, these are only suggestions for how one could construct a gameplan against Mumbai Indians. You could follow each of these ideas to the letter, and fall flat on your face in a humiliating defeat; you could ignore them altogether, and leave triumphant victors. For any number of reasons – conditions, personnel, individual performance or collective mentality – teams may deviate and find success.