Michael Holding showing his eight fingers as a reference to his eight-wicket haul at the Oval in 1976 captures the man’s charm and personality, writes Ben Jones.

Despite the outstretched hands, Michael Holding isn’t begging. He certainly isn’t grovelling. This is a victory pose.

He had just taken eight wickets for 92 runs against Tony Greig’s England, taking his tally to 28 for the series, as the West Indies marched to victory by 231 runs at the Oval in 1976.

Holding is ostensibly holding up eight fingers as a reference to his wicket haul but the effect is similar to that of a boxer squaring up before a fight. ‘Here are my weapons’ he seems to say. He looks so relaxed, so in control. Fresh from the middle, his hair, beard, and moustache are immaculately precise. Wildness tamed.

Holding was an intensely photogenic cricketer. The run-up, famously calm and measured, hurtled along in near silence; the balletic leap; leathering the stumps down, with boot or ball; swaggering across the balcony with shirt open to the waist, raising a glass to another famous victory, another opponent conquered.

Many of the best sporting photographs are action shots, capturing spectacular play – and there are a plethora of images of the Jamaican in full flow – but, for me, this portrait captures more of Holding’s charm and personality than an action shot can. Holding was a star, a man to get people through the turnstiles, dominating English summers as he and his teammates conquered all before them. 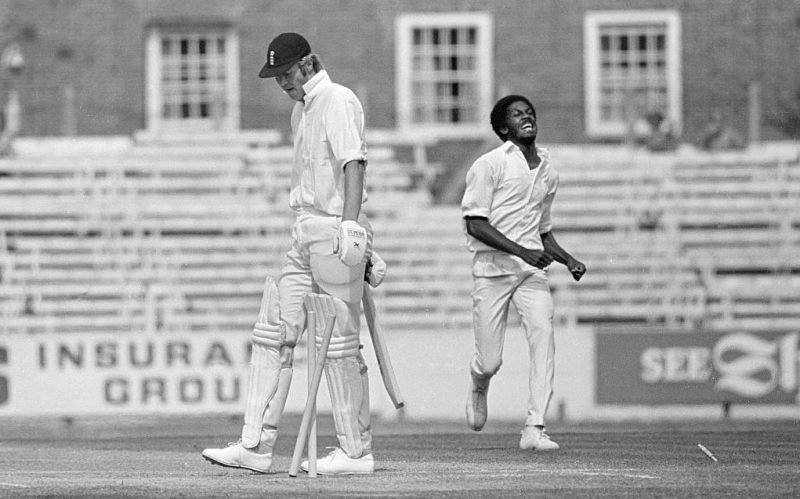 I never had the chance to watch Holding bowl, his career over well before I was born. While we can romanticise the achievements of players we never saw, there is a raw physicality in Holding’s rampaging spells that we rarely see today. A kind of gladiatorial showmanship.

Looking into Holding’s eyes, as he extends his hands towards the lens, it’s the closest we’ll get to appreciating what went through the minds of Amiss, Steele and Greig as they faced up to ‘Whispering Death’.