In an exclusive interview, the Kent batsman tells Jo Harman he hasn’t given up on his England career, dispels a myth about team instructions, and voices his concerns about the negative side of social media.

For one of the more laidback and amiable characters on the circuit, Joe Denly has triggered some strong emotions among English fans and media over the last two years. Since being recalled to the England set-up in late 2018 after a nine-year hiatus, he has continued to divide opinion: some can’t understand how he is anywhere near the England team, viewing him as a pet project of Ed Smith’s; others highlight the role he has played in the resurgence of the Test team, and defend him vociferously.

It’s been an unexpected late twist in the 34-year-old’s career, but it’s not clear how much longer this particular chapter has left to run. Having lost his Test spot to his Kent teammate Zak Crawley at the start of the summer, Denly was recently cut from England’s list of centrally contracted white-ball players and then missed out on selection for this month’s tour of South Africa.

After announcing that touring party, Smith said Denly is still “very much in the hunt” for a place in England’s white-ball squads, describing him as a “trusted player… who could easily come back for a big tournament down the line”, but for the time being he is preparing, much like the rest of us, for a quiet Christmas at home.

It’s a sudden shift for a player who’d become near ever-present in England squads, but Denly insists he’s not giving up on his international career.

“By no means have I written off Test cricket,” he tells Wisden.com, speaking a few days before the squads to South Africa were announced. “I certainly want to get back in and there’s still a lot of cricket to be played. There’s obviously the Ashes at the end of next year, which is a massive carrot for every county cricketer going into next summer, so hopefully I can perform with Kent and at least be in the squad for that. That is a real target of mine.”

Denly concedes that if he is to get another chance in the Test team he’ll need to show more flexibility and fluidity in his game, though he’s adamant that claims he was sent out with the primary target of facing 100 deliveries – a rumour Kevin Pietersen shared while on commentary during England’s tour of South Africa earlier this year which quickly gained traction on social media – are false.

“They were very clear on scoring heavily in the first innings, and they weren’t too worried about how we did it, but at no stage was I told I had to face a hundred balls. Batsmen are meant to go out and score runs, it doesn’t matter how you do it. It may have looked like that in some innings, where I got a bit bogged down and was just looking to bat time. But no, I wasn’t ever told to just go out and do that.

“I’ve met up with Ed [Smith] and I know there are a couple of areas I need to work on. I felt comfortable at the crease and batted for long periods without really scoring at a good rate, and that’s one area I need to try and look at. As much as being solid, it’s about accumulating runs and being tougher to bowl at – working the singles, working twos, being a bit more positive in everything I’m doing.

“And with spin as well. I found myself getting through really tricky periods against high-quality bowling and seeing off the new ball, but then when that spin bowler comes on it’s about taking the chance to up the scoring rate and be positive, which is something I don’t think I did particularly well.” 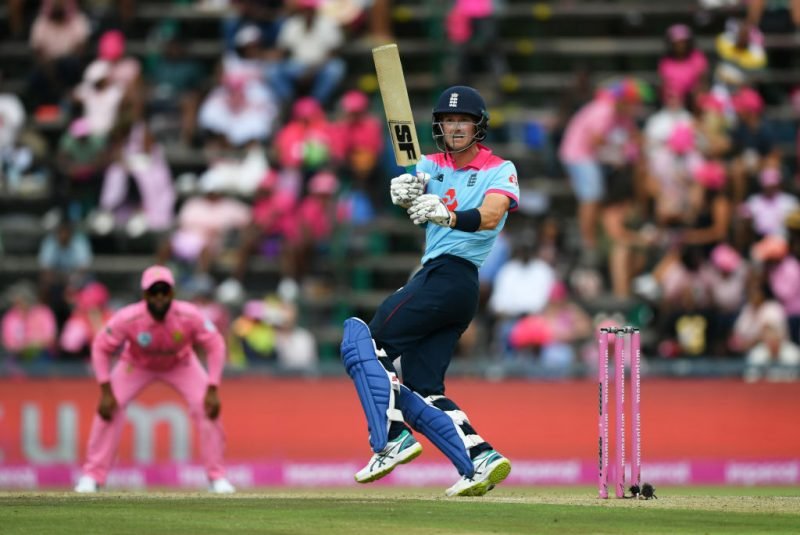 Denly batting in the third ODI against South Africa, February 9, 2020

As for England’s white-ball sides, he admits he’s been learning on the job in an unfamiliar middle-order role, having opened the batting throughout his career. But there were positive signs in South Africa earlier this year when he made 87 and then a match-winning 66 at The Wanderers – his two most recent ODI knocks. In that sense, he can count himself unfortunate to miss out on the latest South African tour, but the variety his leg-spin offers could yet facilitate his return, particularly with the 2021 T20 World Cup taking place in India.

“There’s so many top-three batters in that T20 team it’s incredibly tough to get in, so I find myself coming in at six or seven and trying to play a completely different game to what I’m used to,” he says. “That’s something I’ve got to try and work on. And I think my bowling is going to be a big part of giving myself a real chance for selection in the T20 World Cup; being a threat and giving Morgy [Eoin Morgan] that option to open with leg-spin.”

Denly has experienced enough highs and lows across his 17-year career to not be unduly bothered by the flak he’s received since his England recall, but it has given him food for thought, particularly seeing the effect that less-than-constructive criticism can have on his younger teammates.

“Certainly it’s something I struggled with early in my career when I first played for England, when I was in my early 20s, but I’m a lot better equipped to deal with it. I knew going back into the set-up there were going to be people who weren’t my biggest fans. I can say that I deal with it now quite easily, and it’s all part and parcel of it.

“But it’s something I have thought about, these young guys starting their international careers, or even county careers. Some of the stuff that you get on social media is quite disgusting really. It’s your choice if you want to be on those platforms, and a lot of it is positive and it’s great for guys to be able to share their stories and what they’re up to. But at the same time there’s always going to be that negative side of it.

“There are past players I know who quite often put it on their Twitter accounts, which is disappointing to see. When they played social media wasn’t so big, they didn’t really have to deal with it. I would question whether they’re actually thinking about the effects of those tweets, and how far they travel. That is one question that maybe they should think about.”

Denly adds that the bubble set-ups England players now find themselves part of only heighten the issue.

“It is certainly intensified in these bubbles. A lot of the time you’re sat in your hotel room, and if you’re not a gamer on your Xbox, or you’re not much of a golfer, you do find yourself scrolling through Twitter and Instagram, and you read things that you probably don’t want to read. That happens more often in these bubble situations, so it’s something we’re going to have be careful of going forward, that’s for sure.”

For Denly himself, the glare of the spotlight has moved on for now; the scrutiny that comes with being an international cricketer directed elsewhere. But having received a second chance he thought had passed him by, he’s not ready to let it go just yet.

“I’m quite realistic, it’s going to be tough, and I understand that there’s a lot of good young players around who’ve been pushing their case throughout the summer. They might go with the younger generation, although I hope that’s not the case. I still consider myself to be very fit and that ambition is still there.”