New Zealand were 94-5, staring at defeat. And then Brendon McCullum walked in. By the time he was done, New Zealand had a new record score, and their first Test series win against India since 2002-03.

One of the first things Brendon McCullum alluded to after his epic 302 against India in 2014 was the apparent struggle it was to convince himself before every ball to not hit it too hard. And quite frankly, that’s a classic McCullum problem.

McCullum had walked in when the going was tough. India had scored 438 in reply to New Zealand’s first innings 192, and the ageing Zaheer Khan had rediscovered some of his old spark to reduce the home side to 52-3. McCullum watched on as Tom Latham and Corey Anderson were quickly sent back, and at 94-5, they still needed to score another 152 just to make India bat again.

New Zealand scored a lot more than 152. With McCullum leading the fightback, New Zealand posted a mammoth 680/8 declared in the second innings, with the captain putting on partnerships worth 352 with BJ Watling and 179 with a 23-year-old Jimmy Neesham. India had simply been batted out of the contest, and their hopes of levelling the series, they say, is still lying around the rubbish bins at the Basin Reserve. 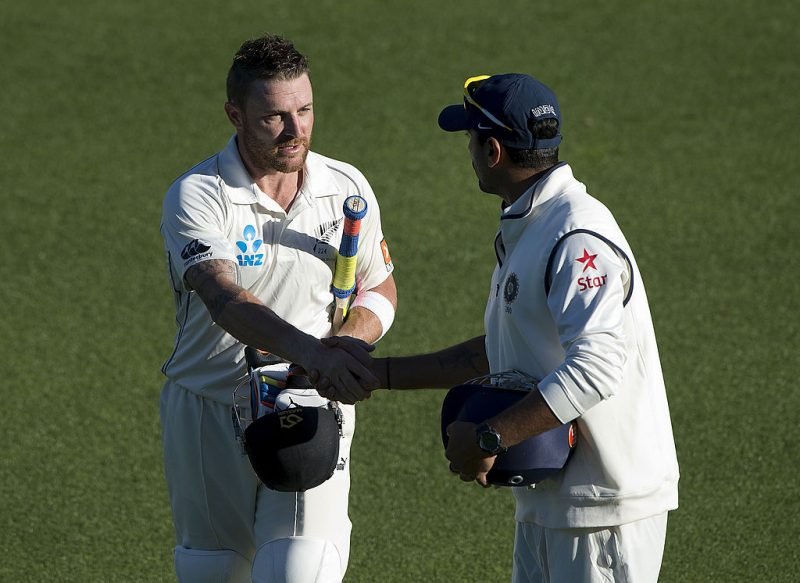 The Indians watching were frustrated first, and then in awe of McCullum’s epic

McCullum veered between batting time, and all out assault. McCullum, the statistics show, started slowly, taking 146 balls to reach his first 50. The onus, of course, was to revive the innings, ensure any momentum the Indians had gained till then is sucked away. That done, the gears were effortlessly shifted: the 100 was brought up in just 51 more balls.

And on that went. He slowed down for his third fifty, taking another 106 balls, and then moved through the gears up and down till he finally reached that magical 300. There was a nervy moment, when on 293, he poked at an Ishant Sharma delivery. Fortunately for him, and indeed a packed Basin Reserve, it dropped just short of MS Dhoni. The Indian captain had a wry smile, but that’s all he could do.

McCullum brought up 300 with a cut to the third man boundary, and in doing so, went past Martin Crowe’s record of the highest individual score for New Zealand – 299. “[I am] almost embarrassed to go past Martin Crowe,” McCullum said afterwards. “Incredibly humbling to get my name there and score the first triple.”

The match was drawn, and New Zealand had a 1-0 series win under their belt, the first time they’d beaten India since 2002-03.

The magic shot, the four that changed history. The shot itself wasn’t anything remarkable – a regulation cut to third man. But the scenes that followed were indelible. All of the Basin Reserve was on its feet. There was thunderous applause that threatened to never quieten down. McCullum raised his bat, contentment etched on his face. It was perfection, or at least as close to it as possible.