From Daphne and Richie Benaud to Shane Warne and Liz Hurley, here’s a look at some of cricket’s famous love affairs. It’s the whole 22 yards for these star-crossed lovers.

An Ashes power couple for the ages. He was a dashing Australian Second World War fighter pilot turned all-conquering all-rounder; she, younger daughter of King George VI and younger sibling to the eventual Queen of England, Elizabeth II. Women loved Miller, and he had a lot of time for them too, but his relationship with Margaret was built on more than just physical attraction. From 1948 onwards, whenever Miller was in England, the princess would seek out his company. Later on in his life, when asked about their association, Miller remarked, “Put it this way, we had a lot of fun.”

“You’re the Australian captain that lost 4-0 in South Africa, aren’t you?”

“Yeah, and you’re the guy who gave up the captaincy of England for money.”

From the moment they met in the Channel Nine commentary box, just two years Greig had captained the World XI during World Series Cricket, it was clear they were meant to be. A rapport that subsisted on niggles but flourished with the utmost respect for one another, Greig and Lawry were an iconic part of the Australian summer for more than 30 years. They would arrive at the ground together in Greig’s car and would dine together most nights. After Greig lost his battle with lung cancer at the turn of the year, Lawry was understandably distraught; “I guess you could say I’m a bit lonely. A bit lost.”

Mitchell Starc and Alyssa Healy at the annual #AusCricketAwards 😍

Here's how their international numbers stack up together ⬇️

Perhaps the most heart-warming tale, Starc and Healy – Ian’s niece – first set eyes on each other when they were both nine and trialling to play representative cricket for the Northern District Cricket Association in Sydney. Both wicketkeepers, they shared duties behind the stumps during their initial throes as teammates before Starc started bowling more and Healy, at 15, began playing women’s cricket. After losing contact for a few years, they rekindled a friendship that blossomed into more and have been inseparable ever since. However the two aren’t all love and hugs – they’ve been banned from training together at their local indoor cricket centre, run by a friend, after, according to Starc, “it got a bit dangerous”. 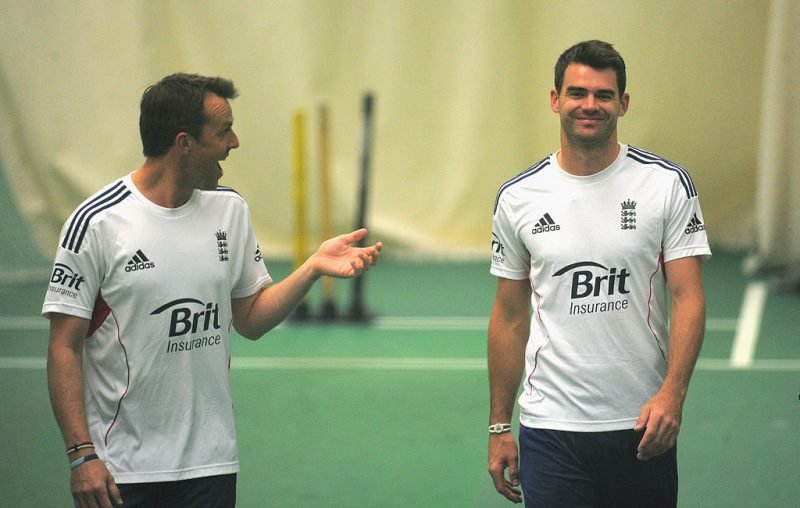 James Anderson and Graeme Swann share a joke during an England net session on July 31, 2013

With the sort of buddy-comedy shtick that would make Paul Rudd blush, this bromance has become one of the hallmarks of a successful Test side. It’s a relationship that seems to flourish as much on the field as it does off it, with both ranked in the ICC’s Top 10 list of Test bowlers (Swann 6th, Anderson 9th) – and they’ve even helped each other take wickets on 31 occasions. They’ve already entertained on the airwaves as part of Greg James’ Not Just Cricket series on BBC Radio 5 live and also shared the sofa on Cricket AM. Ant and Dec must be getting restless.

It’s hard to pinpoint when exactly this union formed. What is clear is that for all their Twitter jousting, no one outside of Kevin Pietersen’s closed circle of confidants supports him more than Piers Morgan. Certainly, no one fights the England No.4’s battles on his behalf so publicly. It was Morgan who got involved in the revealing of the identity of the man behind the infamous “KPGenius” account, before calling out the ECB and Andy Flower when Pietersen was dropped after those texts about Andrew Strauss to opposing South African players. While Morgan has dismissed the notion that he is an advisor to one of the world’s most destructive batsmen, there’s no denying the two have found a mutual appreciation of one another.

Alex Loudon was best known for possessing a legal doosra – a rarity for any bowler, let alone one cultivated outside of the subcontinent. But after retiring in 2007, turning down a two-year contract extension with Warwickshire to focus on a business career, the one-time England ODI bowler was out of sight and out of mind, until Pippa Middleton came into our social conscience, and never left, by virtue of being related to someone that got married. But for all the glamour mag nonsense, Loudon was back in our lives, which was only a good thing. The pair split at the end of 2011. 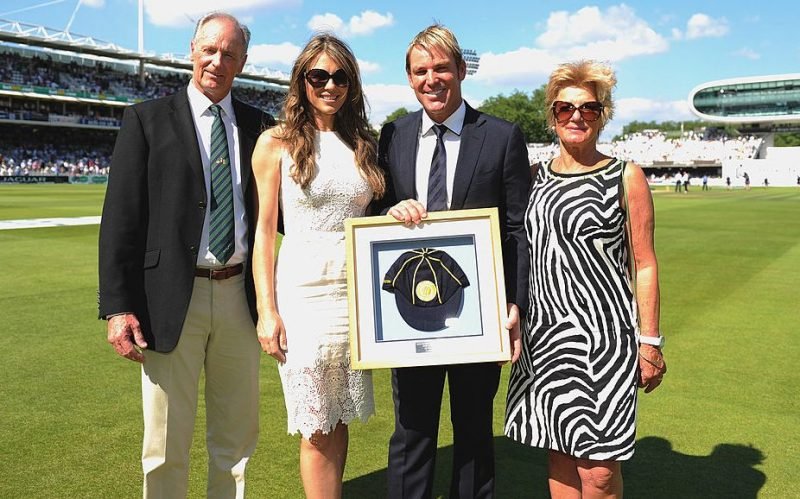 The finest leg-spinner the world has ever seen, and England’s rose (ish). Warne’s courting of Hurley was there for all to see as they exchanged flirty tweets for months before even a hint that this could be something more significant. Both sought solace, and found it, after the end of their respective relationships; Warne with long-term partner Simone Callahan, Liz with husband of four years Arun Nayar. The relationship has remained somewhat public, with 140-character kisses flying back and forth between the two, and confirmation that they were engaged to be married in September 2011. A minor break in online affection a couple of months ago sparked rumours of a permanent split, but the pair have recently reconvened their love-in.

That Pakistan’s captain was marrying India’s number one ranked tennis player is the least outrageous part of a story that gripped both nations, and the rest of us, in 2010. Just days after the pair announced their marriage plans, a woman by the name of Ayesha Siddiqui alleged that she had in fact married Malik in 2002 through a telephone “nikah” – an Islamic ceremony – something which Malik had refuted in January 2008. There was also talk of deception, with Malik claiming the woman he thought he was entering into a relationship with in 2002 was not who she claimed to be in photos she had sent him. In the end, just days after denying he knew who Ayesha was, Malik granted her a divorce and married his beloved Mirza in her hometown of Hyderabad. 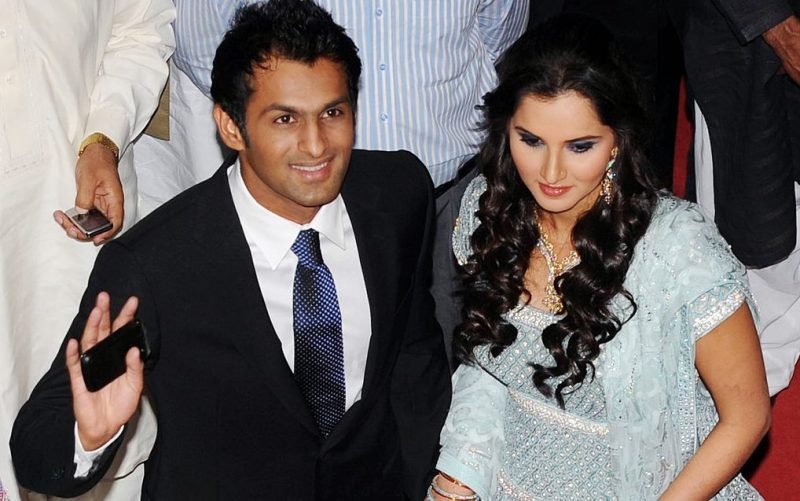 Shoaib Malik and Sania Mirza pictured at their wedding reception in Lahore on April 27, 2010

It was June 26, 1974, after a washed-out Benson and Hedges contest between Leicestershire and Somerset had afforded players, families and friends some extra time at the bar. Kathryn Waller, a family friend of Brian Close (then Somerset captain), drowning in the clubhouse stench of smoke and stale booze, turned to the young man to her left and enquired as to whether he got to watch any of the action that preceded the rain. The response from an 18-year-old was short: “Actually, I’ve been playing!” From then on, they were head over heels, as Beefy embarked on his at times rocky road to legendary status and Kathy settled in to a life Living With A Legend – the title of her book released in 1987. Beefy’s big autobiography – Don’t Tell Kath… – arrived seven years later and today, notwithstanding the odd historical tabloid splash, the first couple of English cricket remain very much together. 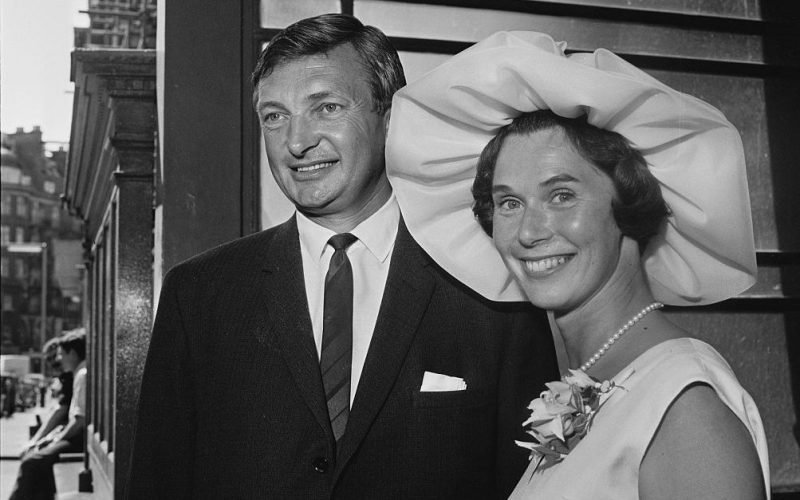 The head of state and first lady of commentary, the Benauds are cricket’s most revered couple. They met on a BBC television course, with Richie planning for a life beyond unblemished captaincy and Daphne looking to make strides in a world not especially open to women. She worked as a personal assistant for a number of cricket writers, including EW Swanton and, in 1961, she became the first woman allowed into a press box at a Test match. They married in 1967 and share a love of cricket, fine wine and even Harry Potter, often reading the books in tandem. Last month after Richie suffered a minor car accident, Daphne was right behind her man: “Richie’s remarkable,” she said. “At first I was quite concerned but today he’s looking unbelievably well.” Even after six decades, they’re still flirting.