When Wisden organised a grand poll to find the five Cricketers of the Century for the 2000 edition there was only one still-active player – Shane Warne.

There are three elements to Shane Warne’s greatness – skill, novelty and drama – and all were manifest in the one great delivery that made his name, at Old Trafford in 1993.

The delivery was exceptionally skillful. It began its flight innocently so as to lull Mike Gatting, drifted to leg, pitched in the batsman’s blind spot, then rounded on him fiercely and bent back off stump. It was at once pinpoint in its accuracy and prodigious in its spin, qualities that had always been thought to be irreconcilable. Later that summer, John Woodcock would write that it was doubtful if there had ever been a bowler who could aim the ball as precisely and turn it as far as Warne. This is a sentiment that has echoed down the seasons.

The delivery was something different. West Indies and their battery of pace bowlers had set the agency for 20 years; spin, particularly wrist-spin, had become nearly defunct, but suddenly here it was again in more irresistible form than ever before.

Most of all, the Gatting ball was not just early in his spell, but his very first delivery – in the match, in the series, in Ashes cricket. That gave the ball a sense of theatre, and Warne a name for showmanship, that has grown at each new threshold of his startling career, and at its peak made him nearly mystical. In the modern era, only Ian Botham could compare.

The triumph of Shane Keith Warne is of the rarest kind, of both substance and style together. At his best, he has the ruthlessness of a clinician and the flourish of a performer, and his bowling is simultaneously a technical and dramatic masterpiece. It was not enough for him to take a hat-trick; it had to be in an Ashes Test on the MCG. It was not enough for him to take 300 wickets; the 300th had to be accompanied by lightning and apocalyptic thunderclaps at the climax of another consummate and match-winning performance against South Africa at the SCG.

Thus in 1993 a theme was established for Warne’s career: extraordinary performances, extraordinary production values. He was the cricketer of and for his times. Australia’s finest moments, but also their worst, their most controversial, most splendid, most dramatic, most sordid, have all revolved around Warne. From the wretchedness of the bookmakers’ scandal to the glory of the World Cup triumph, from the agony of a one-wicket defeat in Pakistan in 1994/95 to the ecstasy of a come-from-behind Ashes win in 1997, he was always the central character.

By cold statistics, Warne had not had such a profound influence on Australian cricket in his time as Dennis Lillee in his. Australia were already on the rise when Warne joined the team and, when they had their crowning moment, in the Caribbean in 1994/95, he was good, but not dominant. He takes fewer wickets per match than Lillee at a more profligate average. Moreover, Australia can and do win matches without him. But Warne’s impact can never be understated. When he was first picked, cricket was under the tyranny of fast bowling and aching for another dimension. Soon enough, the world came to know that a man could take Test wickets by seduction as well as extortion.

And the legend grew, moment by moment, coup by coup, performance by performance. He made fools of good players, short work of fools. Australia’s method was indestructibly simple: bat first, bowl last, win quickly. Always it was the stage that invigorated him as much as the challenge. For Victoria, who play in empty stadia, he averages more than 40. But for Australia, he has taken more than 350 wickets and, although projections for him to take 600 now seem fanciful, he is already by some margin the most successful spinner in Test history. 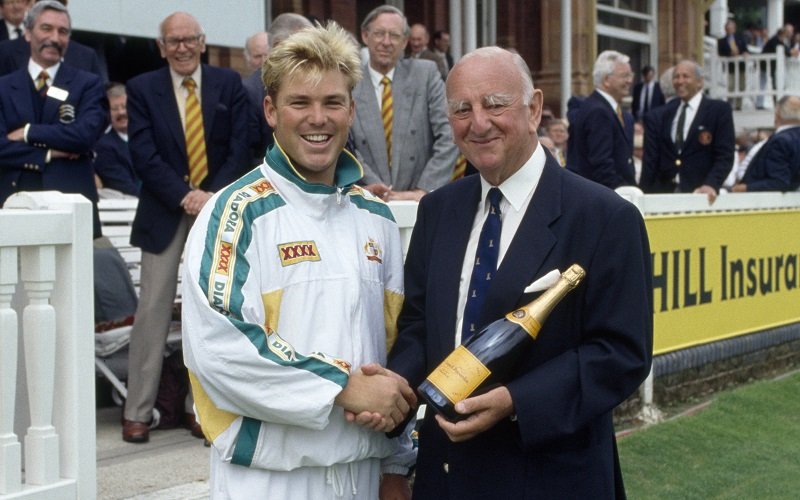 At length, intimations came of Warne’s mortality. Wear, tear and public glare took a toll, Variously, the fitness of his finger, shoulder, stomach, ethics and manners for Test cricket were called into question, but not until recently, when he returned too hastily from shoulder surgery, was his capability doubted.

Physically, undoubtedly, his powers have declined, but not his hold on opponents. So it was that on the biggest stage of all, at the climax of the World Cup, at a moment when Australia looked impossibly behind, he came again. The only caveat on making him one of the cricketers of the 20th century is that he may yet figure in deliberations for the 21st.