From Ambrose and Walsh to Warne and McGrath – Richard H Thomas lists 10 of the greatest bowling partnerships from the game’s history.

You would struggle to find two more unlikely-looking sporting heroes. Left-armer Alf Valentine was bespectacled and bookish, while Sonny Ramadhin – mousy and moustachioed – was more of a mystery spinner. Such was their success during the West Indies tour of England in 1950 – taking 59 wickets between them – that ‘those two little pals of mine’ were immortalised by legendary calypso hero, Lord Kitchener. Ramadhin still lives in Lancashire after finishing his career in the leagues, while Valentine died in Florida in 2004, where he and his wife had dedicated his last years to taking in scores of foster children. 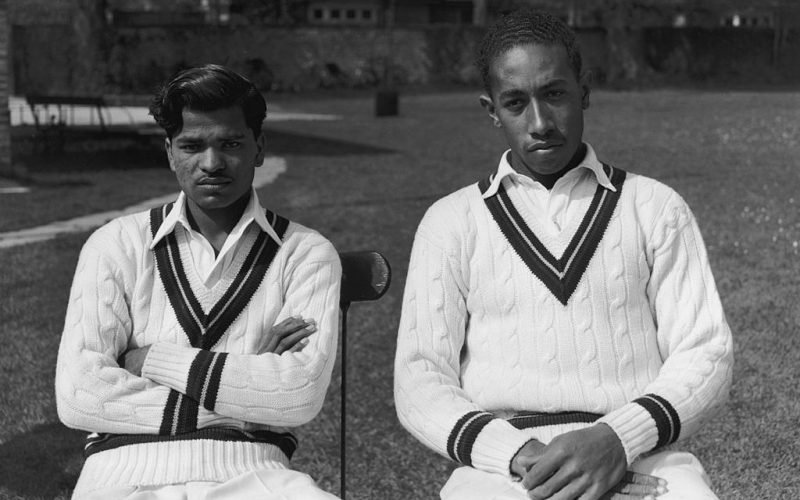 Curtly Ambrose’s mother apparently used to ring a bell outside her Antiguan home every time he took a wicket. If so, she was rushed off her feet in 1993 when he took seven Australian wickets for one run in Perth, and when he demolished England’s middle-order with 6-24 at Trinidad the following year. Famously reticent in talking to the media, few other regular bass guitarists can claim over 400 Test wickets. His new-ball partner was somewhat ungainly, but Courtney sustained his pace and threat over a 17- year Test career, and of pacemen only Glenn McGrath (and now, James Anderson) has more Test scalps. A popular servant and former captain of Gloucestershire, he acquired a reputation for kindness that was rather unfashionable for a quick bowler.

These two former Nottinghamshire miners left the pit to become loyal and determined lieutenants to Douglas Jardine, instrumental in his plans for leg theory. Left-armer Voce was originally a slow bowler, and varied his pace with great effect throughout his career, while newsreel footage of Larwood showed him to be wiry and short with a beautifully smooth run-up and delivery. Unlike his colleague, Voce continued in Tests after Bodyline but remained reluctant to discuss his infamy right until his death in 1984. Larwood remained an interested observer until he died at 90 in his adopted Sydney, 40 years after arriving there on the same boat that had delivered him to the most controversial Test series of all time less than 20 years previously.

Tony Lock bowled an angry spell of 1-37 at Old Trafford in 1956 when his Surrey spin twin, Jim Laker, yielded the same runs but took nine, followed by all 10 in the second innings. And so it was – the quieter, erudite Laker headlined, while Lock bowled slow left-arm with the snarl of a fast man. Under Stuart Surridge, they helped deliver seven successive Championships in the 1950s. Lock was also a useful batsman, but his career was a little overshadowed by a suspect quicker ball, while Laker delivered his TV commentaries in the same unflappable way that he slung his sweater over his shoulder and strolled off having taken the best match figures in first-class history.

And just for old-time’s sake, let’s relive a bit of Old Trafford ’56. Fair to say celebrations were a bit more low key in those days…

They complemented each other beautifully: Keith Miller – charismatic, eccentric, explosive – and the less obtrusive Ray Lindwall with the classic action of a thoroughbred. The Aussies terrorised batsmen for a decade and were both part of Bradman’s 1948 ‘Invincibles’ team, although Miller fell out with his captain when he allowed himself to be bowled first ball as his colleagues plundered 721 in a day against Essex. Lindwall was the quiet all-round champion sportsman who retired to run a florist’s shop while mop-haired Miller’s flamboyant and chaotic style was epitomised by his comments when discovering once that there were 12 fielders. “One of you ‘eff off,” he suggested, “and the rest? Scatter…”

Like other double acts, these two had different styles and were very different characters. The belligerent Trueman took the game by the scruff of the neck – “Some men may have bowled … faster than Trueman, but none has done so with more gusto,” wrote Geoffrey Moorhouse in his book ‘Fred Trueman’. While the Yorkshire half of this duo took the spotlight, his Red Rose partner Brian Statham, known as ‘George’, went quietly about the business of becoming the fifth highest England Test wicket-taker, two behind Trueman. While ‘Sir Fred’ regularly didn’t know what was going on out there during his stint on TMS, his great friend struggled with illness until his death in 2000.

Shirt flapping and tearing in from an enormous run, Wes Hall bowled two of the most famous last overs in Test history – the tied Test in Brisbane in 1960, and the ‘Cowdrey broken arm’ Test at Lord’s three years later. His silky smoothness was never quite matched by fellow Barbadian Griffith, whose main weapon was a lethal faster ball – almost literally in the case of the Indian Nari Contractor, who once suffered a life-threatening fractured skull. His action was the subject of continuing controversy, and the furore eventually diminished his potency. He finished with 94 Test wickets, while Hall bagged almost twice as many before a successful career as church leader and politican, probably preferring to forget his well-meaning association with Sir Allen Stanford.

Sounding like your Nana’s next door neighbour, they were the unruly combination that petrified England during the Ashes series of 1974/75, sharing the new ball and an appetite for controversy. There were aluminium bats, spats with Javed and frank admissions about bowling to hurt batsmen. Lillee’s action made the purists purr and was only temporarily inconvenienced by a serious back problem after taking 31 England wickets in 1972. Named in Australia’s Test Team of the Century, he was an enduring entertainer, while partner-in-crime Thomson didn’t quite have the longevity or pedigree with his slingy action, but was still capable of blistering speeds. Both early recruits for World Series Cricket, they embraced the revolution and together were probably the reason for that modern kit essential – the helmet.

Charismatic, handsome and the most potent pace bowling combination produced by the subcontinent. Floppy-haired southpaw Wasim used guile and variation, as well as raw pace – Lara and Kallis both cite him as the best they faced – while Waqar broke many a toe with his cruel yorkers and was an early practitioner of reverse swing. He and Sachin Tendulkar shared a Test debut at Karachi in 1989, and he took the honours by bowling ‘The Little Master’ for 15. Spells with Surrey and Glamorgan followed, as did the dubious honour of becoming the first bowler to be banned for ball tampering. The diabetic Wasim enhanced his contribution with some swashbuckling batting and a somewhat troubled Test captaincy. Pakistan were always a fearsome prospect with these two in harness. 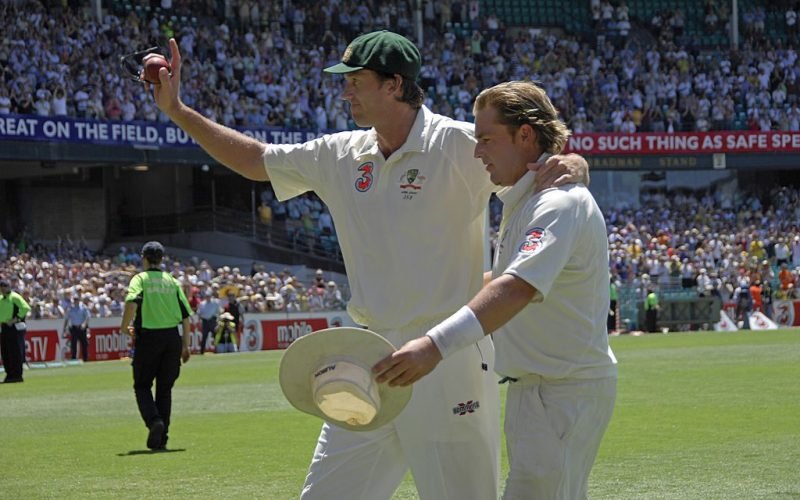 A memorable farewell! McGrath and Warne acknowledge the crowd after playing their last Test at the SCG in January 2007. They picked up 44 wickets between them to help Australia take the Ashes 5-0

Our only spin/speed combination makes the number one spot by sheer weight of statistics. Glenn McGrath’s unerring accuracy and bounce throttled one end while Warne discharged his full repertoire at the other. Both had the archetypal Aussie dislike of batsmen as several run-ins with officialdom would testify. The willowy McGrath became the first Australian fast bowler to 100 Tests, and the efficient economy of his high action was perhaps the secret of his longevity. While McGrath looks pretty safe for some time as the highest pace bowling Test wicket-taker, perhaps no one else will ever overtake Shane Warne’s 708 wickets, claiming second place to Murali in the all-time list. He would perhaps have traded a sizeable number of them for a much-coveted Test century – the highest of his 12 fifties fell one short of the magic three figures. “Love him or hate him,” said Sri Lankan Kumar Sangakkara recently, on behalf of the cricketing world, “we were definitely very lucky to have him.”