In partnership with Sonny Ramadhin, West Indies’ Alf Valentine cut a swathe through English batsmen in the Test series between the sides in 1950 and his remarkable career was recalled in his Wisden Almanack obituary in 2005.

A toothy Jamaican, Alf Valentine had a meteoric rise to fame, being selected for West Indies’ 1950 tour of England aged just 20, after only two first-class matches, and then, along with the Trinidadian off-spinner Sonny Ramadhin, spinning West Indies to three successive and sensational victories. This was the first hint of the new world order that would dominate the game for much of the next half-century. It also spawned perhaps cricket’s most famous song: Lord Beginner’s calypso about

Those two little pals o’ mine,
Ramadhin and Valentine.

Valentine’s two previous matches were both selection trials. He made little impact in them – he took two for 190 and was rather flummoxed by the matting pitches – but he impressed the tour captain, John Goddard, and was boosted by a recommendation from the former Glamorgan fast bowler Jack Mercer, who had coached him in Jamaica.

Valentine was a brisk left-armer who gave the ball a prodigious tweak and sometimes made it fizz audibly. On that tour, he bowled nearly 1,200 overs and took 123 wickets, but he started steadily rather than spectacularly, and might not have played in the first Test at Old Trafford had it not been preceded by a match there against Lancashire, in which he took 13 wickets for 67.

Doug Insole played in that game, and had his Test debut rather ruined by the two spinners as he made 21 and nought: “Valentine wasn’t a graceful-type bowler, he’d chunter up to the wicket and rip it.” Clyde Walcott was keeping wicket: “Val in 1950 was extremely accurate, and he concentrated on pure spin with no gimmicks. The result was that he turned the ball more in helpful conditions than any left-arm bowler I have ever seen,” he said. “Those who thought that batsmen got out to Valentine merely in reaction to playing Ramadhin at the other end underrated Val badly.”

Sonny Ramadhin – who celebrated his 91st birthday at the start of the month – was a @WisdenAlmanack Cricketer of the Year in 1951. https://t.co/Jgq5fNcdqh

Halfway through the tour a team-mate asked him the score, but he couldn’t read the board. He was despatched for some National Health specs, which he wore from then on, secured by sticking-plaster when he bowled. They did little for his batting – he ended up with more first-class wickets (475) than runs (470).

The big rip Valentine gave the ball took its toll on his fingers, which he bathed in surgical spirit and later, following a tip from Richie Benaud, a mixture of calamine lotion and boracic acid powder. England 1950 remained the pinnacle of his career: although he took 24 Test wickets in Australia in 1951/52, the harder pitches allowed the batsmen to combat the spin twins more effectively. 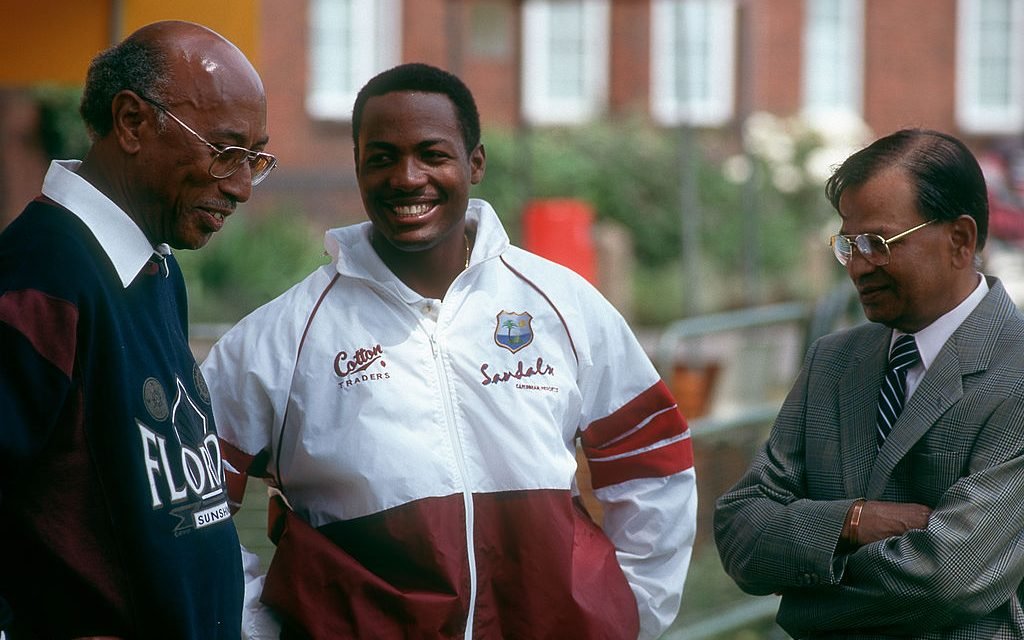 Valentine had little subtlety beyond the fizzing spin, and rarely bothered top batsmen again, although he was still a fine containing bowler (Frank Worrell wrote: “No matter what sort of field the skipper places to suit the team’s tactics at that time, Valentine can and will bowl to it”). At Georgetown in February 1954 he became the first West Indian to reach 100 Test wickets, in only three years and eight months, on his way to a final tally of 139. But a youngster called Garfield Sobers made his debut in the last match of that England series, and although his left-arm spin was altogether gentler than Valentine’s, the other aspects of his game were infinitely superior.

Valentine carried on, touring England in 1957, when a broken nose and loss of confidence hampered him, and played in the tied Test at Brisbane in 1960/61, where his sensible piece of backing-up in the final over saved what would have been the winning overthrows. He faded out of Test cricket, still only 31, after the final match of West Indies’ clean sweep over India in 1961/62, although he toured England one last time without making the Test team in 1963.

After a few years in the Birmingham League, he returned home, and moved to Florida in 1978 with his second wife Jacquelyn (his first wife Gwendolyn, who bore him four daughters, had died). A chance visit to a Sydney care home during that 1960/61 tour had made him want to devote his life to helping underprivileged children, and the Valentines became foster parents to a succession of what are known in Florida as “adjudicated children” – those in need of special care and counselling while their parents are in prison or rehabilitation.

Sometimes they would have as many as 12 at a time, and Valentine lost count of the total number who passed through their care.