Warwickshire’s bespectacled keeper had put down the gauntlets in 2006 to pursue a career as a groundsman, bringing a decade of diligent but unspectacular service to a close. However, he was unexpectedly cajoled out of retirement when England called up Tim Ambrose. Frost scored 46* in his first match for two years, 90 in his next and plenty more thereafter, finishing the campaign with a career-best 242*. Having expected to spend his season on a lawnmower, Frosty the yeoman finished it on top of the Championship batting averages.

“They go together in English cricket as Gilbert and Sullivan go together in English opera,” wrote RC Robertson-Glasgow, and in 1947 the Middlesex pair belted out classic after classic to rewrite the record books. In all first-class cricket they scored 7,335 runs, took 140 wickets and held 66 catches between them. Middlesex won their first title for 26 years and John Robertson – 2,214 runs at 65.11 – was left to wonder how he’d finished third in the county’s batting averages. 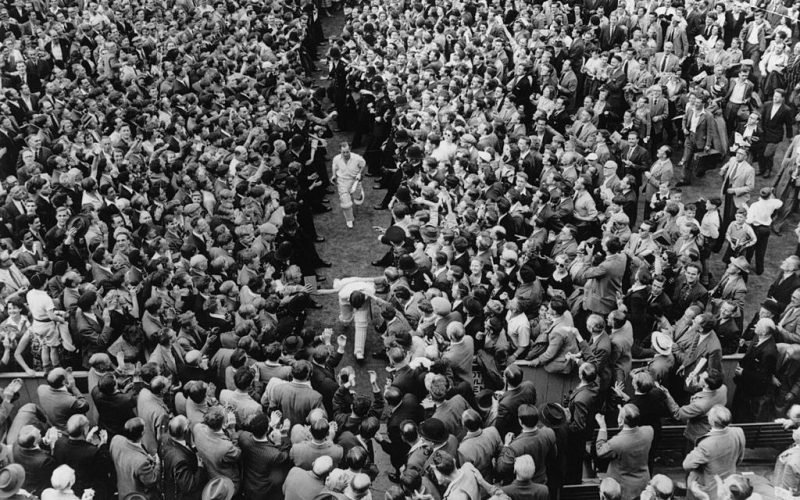 Sussex hadn’t won a County Championship until the Pakistani leggie’s arrival. In the five seasons he spent at Hove, they won it three times. The duck was broken in 2003 when Mushy became the first bowler since Courtney Walsh in 1998 to take 100+ wickets in a Championship campaign. He repeated the trick in 2006 – no bowler has hit the 100-wicket landmark since – and took 90 the following season as the south-coasters won back-to-back titles.

After nine seasons of mediocrity in which he’d mustered seven centuries, with his greatest claim to fame facing Wasim in a floppy in the 1995 B&H final, Kent’s skipper found himself on the verge of an England call-up after a gluttonous campaign that featured nine tons, eight of them in the Championship. Nasser Hussain later revealed that England’s selectors had chosen Fulton for the Headingley Ashes Test in place of Mark Butcher after the Surrey man had broken curfew, only to have a late change of heart. As it was, Butch batted rather nicely and Fulton returned to the shires.

Stewart’s run haul was healthy enough in Surrey’s title-winning campaign but it’s his superlative fielding at short-leg that sees him make this list. Under ultra-aggressive captain Stuart Surridge, Surrey took the innovative step of crowding batsmen with close fielders, allowing them to take catches off defensive shots if they dared stand close enough. Surridge had retired by 1957 but the philosophy was ingrained and Stewart was the ideal man to station at boot hill. Fearless and agile, he took 77 catches in all first-class cricket including a world-record seven in an innings at Northampton.

Simmons had long been touted as an outstanding talent but his modest record didn’t scream ‘marquee signing’ when he arrived for a second season at Leicestershire. However, in a roster of overseas players that included Walsh, Ambrose, Pollock and Bevan, come September there was no doubting the star turn. A beefed up Simmons was in full beast-mode, bowling faster than ever, whacking it miles and catching pigeons at slip. The Trinidadian inspired an unfancied side to their first Championship title in 21 years and became the first player to take 50+ wickets and score 1,000+ runs in a Championship season since Kevin Curran in 1990. Will Gidman is the only man to achieve the feat since.

“He batted with something like the disdain of Greenidge himself.”

On Phil Simmons’ 57th birthday, here’s Jonathan Agnew’s account of his glorious stint with Leicestershire in 1996, which made him a Wisden Cricketer of the Year the following season.https://t.co/OFWwBgPS4h

England waited with baited breath for the day that Harare-born Hick qualified to represent them and it became almost too tantalising to bear when in 1988 – still three years before he became eligible – the 21-year-old became only the second batsman since World War II to score 1,000 first-class runs before the end of May, helped along by a mammoth 405* at Taunton. Hick topped the Championship run-scoring charts for the third year in succession and led Worcestershire to their first title since 1974.

A batting colossus for Hampshire for over 30 years, Mead scored more Championship runs than any man before or since – just the 46,268 of them – and topped 2,000 in a campaign on nine occasions. “He was never much concerned with breaking records,” said John Arlott. Pity really, because he was bloody good at it. The left-hander’s tour de force came in 1928 when, at the age of 41, he racked up 3,000 first-class runs including a record 2,843 in the Championship.

Ramps had been in imperious form since arriving at Surrey in 2001 but this was the season when he really took it up a notch. He made a career-best 292 against Gloucestershire, topped that with a triple against Northants and passed 2,000 runs in his 20th innings – a new record. His campaign included a string of 150+ scores in five consecutive matches – another new record – but wasn’t enough to get him in the Ashes tour party. It seemed like a one-off, a feat never to be repeated, but then he went and did it again in 2007, hitting 2,026 at 101.30.

It’s testimony to the sublime skills of Alfred Percy Freeman, know to all as Tich, that in 1933 the great Hedley Verity snared 153 victims and was still one shy of a hundred wickets short of Kent’s diminutive leggie. Only Wilfred Rhodes, who played nearly twice as many matches, has more than Freeman’s 3,776 first-class scalps, and Freeman is one of only six men to have taken 200+ wickets in a County Championship season, doing it on six occasions between 1928 and 1935, the last of those at the ripe old age of 47. For skill, stamina and prolificacy, Freeman has had no equal in the county game.