From short strolls to global adventures, Sam Stow ran through the most memorable passages in cricketing history.

Ignoring all sorts of security warnings from the ECB, Neil Hannon and Thomas Walsh (aka musical ensemble The Duckworth Lewis Method) rubbed the sleep from their eyes, filled up their technicolour VW camper van and set off in search of Javed Miandad. Through a mixture of goodwill and good fortune they safely navigated Anatolia and the Middle East (via the opium fields of Afghanistan if their ‘video diary’ is anything to go by) before serenading Pakistan’s most prolific batsman with a catchy three-minute pop song. And then everyone woke up…

9. Beefy’s hike around the Himalayas

With or without elephants, Sir Ian has walked his plates to within an inch of carpaccio too many times to remember, but perhaps his most spectacular and demanding charity walk was up and down the hills (or rather mountains) of the Himalayas in 1995. Having launched the first ever Annapurna 100 – a now annual 100 km race around the famous Annapurna Circuit in Nepal – Beefy set off on a ‘speed trek’ 24 hours before the race proper. Two gruelling days and 7,000 feet of altitude later, he arrived at the finish line, ran a few baths for the arriving runners and settled back with a bottle of red. Not bad for an almost-40-year-old.

Former New Zealand wicketkeeper Adam Parore went even higher into the Himalayas in 2011, scaling Mount Everest to ‘reach the top of the world’ despite running out of oxygen and “freaking out” on several occasions. Parore credited his success to the help of his Sherpa and an old friend who kept “poking [him] in the ass with his ice pick axes to keep [him] going,” but rather disappointingly found reaching the summit a rather underwhelming experience. “I had great plans on what I should do and how I might feel but in the end… I just wanted to get down and live.”

Pioneering a genre that East 17 frontman Brian Harvey would infamously stuff with jacket potatoes in 2005, Ted Dexter ran himself over and out of the 1965/66 Ashes tour. Having drained his Jaguar of juice on the streets of west London, the former England skipper was attempting to push it to safety when it spluttered back to life and pinned him to a warehouse door, breaking his leg in the process. He made a brief return to the highest level in 1968, but played his last first-class match the same year.

Not content with a night of legendary boozing, Michael Vaughan’s Ashes-winning squad boarded an open-top bus at Mansion House and cracked open the champagne. Whilst KP sprayed away at the adoring public and Geraint Jones waved an inflatable Dalek, Andrew Flintoff attempted to avoid the mother of all hangovers by glugging away a couple of magnums en route to Trafalgar Square. It was there that the bus stopped and Flintoff, as honest as ever, fessed up to David Gower that he was “struggling”. Shortly afterwards, a clearly disoriented Flintoff and teammates were sipping (warm) white wine in Downing Street, and England’s Man of the Series was – in an absence of an easily accessible toilet – eyeing up a rose garden. Whether or not the flowers were actually watered is open for debate, but it was definitely time for Freddie et al. to call it a day.

‘Epic’ is probably a better word to describe Oli Broom’s journey from Lord’s to Brisbane, a trip which took over 14 months and saw the former chartered surveyor pass through 23 countries on his way to the start of the 2010/11 Ashes. Raising money for a brace of charities and playing and coaching cricket wherever possible, Broom survived extremes of heat and cold, lions, dengue fever, 25-foot waves and packs of Kangal dogs, which he warded off with the help of a shepherd’s crook and a Mongoose cricket bat. He was greeted at the Gabba by Andrew Strauss, while a celebratory drinking session culminated in Michael Vaughan – perhaps still recovering from 2005 – falling off Broom’s trusty bike. 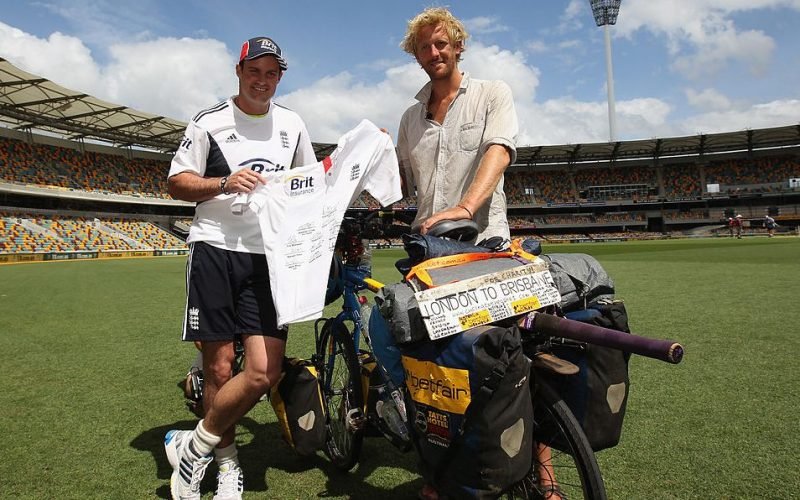 What was meant to be a relaxing drive to third day’s play of a meandering Test at the Gaddafi Stadium turned into a living nightmare in the blink of an eye as Sri Lanka’s team bus was set upon by a dozen armed terrorists. Six policeman and two civilians were killed, while assistant coach Paul Farbrace and seven players including Thilan Samaraweera (who later required two hours of surgery on his shredded thigh) were injured. As the bullets sprayed the bus, driver Meher Khalil somehow managed to get the bus to the safety of the stadium, despite punctures to all four tyres, and within minutes the team were picked up by a military helicopter and on their way to safety.

John Arlott’s lyrical contributions, both on paper and over the airwaves, entertained cricket fans for almost five decades, but perhaps his greatest contribution to cricket was bringing Basil D’Oliveira to England. The journey itself was incident free, but by persuading Central Lancashire League Club Middleton to take on D’Oliveira as their pro in 1960, Arlott set in motion a series of events that would see the all-rounder – who was banned from playing in South Africa because of his ‘Cape Coloured’ skin – selected for England, via Worcestershire, in 1966. Two years later, South Africa’s refusal to accept an MCC tour party including D’Oliveira was the catalyst for South Africa’s expulsion from international cricket, and Arlott’s simple show of humanity had become a humanitarian movement.

What could have been a horrific disaster turned into a Laurel & Hardy-esque escape as Air Marshal Sir Harold John Maguire narrowly avoided inventing an 11th mode of dismissal while ‘landing’ a misfiring spitfire. Having flown the classic fighter over Whitehall as part of 1959’s Battle of Britain commemorations, he was forced to make for terra firma in Bromley and crash-landed on the Oxo cricket pitch. He comprehensively smashed a set of stumps, but, thankfully, this was as bad as things got. While there had been a match in progress, the players had stopped for tea, and the Air Marshal decided to join them for a calming cuppa. A most English accident.

1. The short walk through the Long Room

As much an entrance as a journey but still the ultimate rite of passage for an international cricketer. From the dressing room and down several flights of stairs, the walk out onto the hallowed turf of HQ culminates in passing through cricket’s most revered space – full of old wood and even older portraits, the Long Room represents cricket’s glorious history in microcosm. Hard-back chairs and the advancing years of many MCC members may lend a certain stiffness to the scene, but any cricketer who is lucky enough to leave the pavilion through the ‘front door’, is left with the warmest of glows.